Warning: Don’t Try To Bottom Fish For This Stock

The truth is, oil prices were already trending lower on fears that coronavirus will bite into global demand. Compounding matters, the pact between Russia and Saudi Arabia to constrict supplies is over. The two countries were throttling back on production in an attempt to reduce the supply glut and prop up prices. But that alliance fell apart when talks broke down.

Negotiating on behalf of OPEC, Saudi Arabia and its partners pledged to cut production by 1 million barrels per day if Russia would do its part and trim 500,000. Moscow balked. Some believe the Kremlin is deliberately trying to tank oil prices to bankrupt U.S. shale producers, who have emerged as a major competitive threat. Possibly, although larger multinational producers like ExxonMobil (NYSE: XOM) would just swoop in and buy their distressed assets.

In any case, with Russia refusing to participate, Saudi Arabia responded by discounting export prices in an attempt to gain market share.

This caused havoc among traders. With decreased global appetite due to the coronavirus, investors were hoping to see deeper cuts to shore up prices. At the very least, they wanted the current production curbs extended for a while. Instead, they got the opposite. A global oil market that was already oversupplied will soon be flooded by even more output.

So we have a supply shock coinciding with a demand shock. Not good. As you can see below, this perfect storm triggered the second steepest oil crash on record. 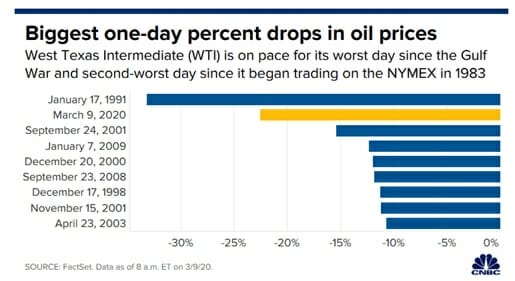 One Of The Biggest Casualties

Occidental Petroleum (NYSE: OXY) was among the hardest hit. The stock was cut in half, falling from $26 to below $12 just recently – erasing more than $12 billion in market cap.

Occidental has many operating strengths. The company has only drilled 4% of all Permian Basin wells, yet owns 23% of the top performers. It has also diligently lowered breakeven costs and can maintain positive cash flows at lower levels than many peers.

But the leveraged balance sheet is a killer in this environment. With oil at $50 per barrel, Occidental was able to balance its dividends, interest payments, and capital expenditures. At $30, things look dicey. Traders have priced in a growing risk of default. One class of OXY bonds that were trading at 90 cents on the dollar last week plummeted to 63 cents (many bonds in the energy sector are in a similar territory).

This is an extraordinary turn of events. Occidental is a world-class producer that has raised dividends for 17 straight years. Not long ago, this business had an enterprise value of $50 billion.

The biggest question that will determine the stock’s near-term fate is how long oil prices stay at these depressed levels. $30 oil is a money-losing proposition for most. Commodity hedges help, but there is little incentive to explore and drill at this level. One industry executive, Pioneer Natural Resources Chief Scott Sheffield, predicts the current downturn will force shale producers will throttle back production by 2.0 to 2.5 million barrels per day by next year. That’s more than just a gentle tapping of the brakes – and it could drive prices back where they were.

Boom to bust back to boom. That being said, OPEC and Russia have dug in their heels and may be willing to keep the spigots open (and sacrifice short-term profits) to achieve longer-term goals. And slowing economic activity in Asia could dampen global consumption this year – for just the fourth time in the past 40 years.

The marginal cost of oil production worldwide is $55 per barrel. Eventually, prices should stabilize in that neighborhood. In this environment, though, pay close attention to debt maturity schedules. Fortunately, Occidental only had one loan come due in 2020 and it has already been repaid in full. It isn’t facing any further maturities until 2021 and beyond – giving oil prices some time to recover.

Do I think OXY can eventually recoup these losses? Yes. But that’s not the right question. The better question is whether this cash could be better deployed elsewhere in the interim without losing your exposure to a potential oil rally. My advice: fish in other waters.

P.S. My colleague Jim Fink has devised a proprietary investing system that works in any market… That includes a three-and-a-half-year winning streak in which his followers have raked in tens of thousands of dollars… without a single loss.

Jim just agreed to show 500 smart investors how it all works. And if you want to join his group, you’d better act now because spots are going fast. Go here to learn more.