Looking for a detailed review of Survey Club?

Perfect, you’re in the right place! 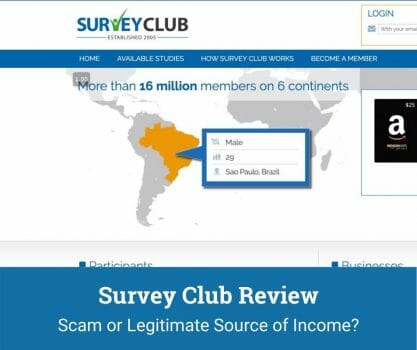 In this guide you’ll learn:

Let’s get into it!

What's In This Guide?

If you’ve ever wanted a quick way to make money online, you’ve probably considered taking surveys on paid survey sites. After all, what could be easier than answering some simple questions whilst laid down in bed?

Yet when you’re new to the world of online surveys, figuring out where to start can seem overwhelming. We’d recommend trying a few sites so you can compare them, but for now, let’s talk about Survey Club specifically.

What Is “Survey Club”?

As you probably know by now, SurveyClub.com is a website that connects its users to market research companies via surveys. Established in 2005 in Colorado, it was a pioneer in the sector – with an impressive fifteen years’ history and 16 million users, they must be doing something right! 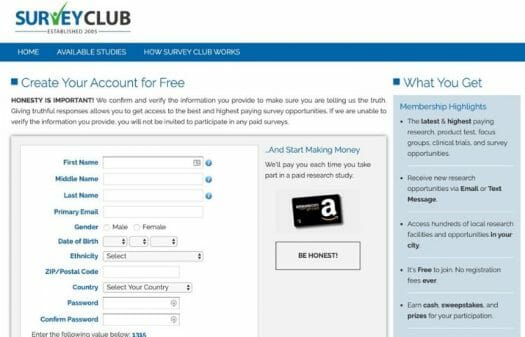 But Survey Club is about more than just surveys, although they do make up the majority of work on the site. Sometimes, you can take part in other types of studies too:

How Does Survey Club Work? 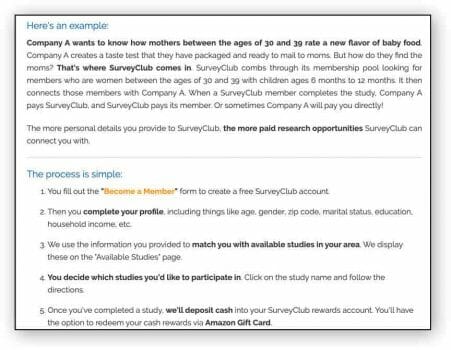 However, Survey Club works in a slightly different way to its competitors. As well as carrying out their own studies, some of the questionnaires that appear on the website come from other survey sites (for example, Inbox Dollars).

On one hand, this means there’s a greater range of studies for you to take part in. But external surveys require you to sign up on new websites and won’t give you any points on Survey Club, which is annoying for many users.

Survey Club have partnerships with companies all around the world in various sectors, from Disney to Crayola. So, you can expect a wide range of questions!

Most of the studies involve consumer research for products and services – companies need to know how their customers think and act. For example, you might be asked for your opinion about a brand or how often you use a certain service.

Whereas surveys ask multiple-choice questions, focus groups or survey panels involve more in-depth discussions for market research purposes. You could be asked to explain how you feel about a new product idea.

If Survey Club offers you the chance to participate in a focus group, snap it up quickly. These opportunities are rare but very well-paid with more earning potential compared to surveys.

Many people are suspicious of online survey sites – you might wonder if they’re a scam or that you’ll never receive payment.

There’s good reason to be skeptical of any offer that sounds too good to be true, but Survey Club doesn’t fall into that category. They’re offering to pay you a moderate amount of money in return for some personal information.

Besides, they wouldn’t have survived more than a decade if they didn’t live up to their promises.

Still not convinced? Let’s look at some user reviews.

On Trustpilot, Survey Club have a ‘great’ score; not a single customer has given a ‘poor’ or ‘bad’ review. This is promising, because Trustpilot is often the first place people go when they have a complaint to make about a company. 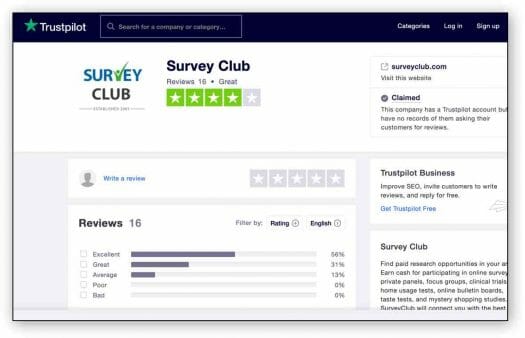 However, Survey Club have a surprisingly low number of reviews on the site: just 16. In contrast, Swagbucks have more than 16,000 reviews and Survey Junkie have more than 15,000.

This suggests not many of Survey Club’s 16 million members actively use the site. So, you might prefer to earn money on a more popular platform.

How does Survey Club make money?

Many people can’t get their heads around the idea of getting paid for completing surveys.

In reality, it makes complete sense. Knowing what customers are thinking is extremely valuable to businesses, so they’re happy to pay companies like Survey Club to collect the information they need.

Secondly, some survey sites (like Ipsos) pay Survey Club a commission to attract extra traffic for them.

How Much Money Can You Make With the Survey Club?

When deciding between survey sites, few things are more important than pay. Completing surveys won’t make you rich, and Survey Club is no exception to that rule. But earning a modest amount is certainly possible!

The amount you can earn depends on how many points you get per survey and the number of surveys you complete, plus you can make some extra cash through referrals. Let’s look at these aspects in more detail.

Longer surveys almost always provide more points, although there are some exceptions. Most surveys will pay you between $0.50 and $5, with the average five minute survey paying about $1. It might not sound like much, but that’s a rate of $12 an hour!

As mentioned already, focus groups are far more profitable. You may be able to earn between $50 and $200 an hour – just don’t count on receiving an invite very often.

You should also bear in mind that not all studies give you points you can use towards a cash payout; some only offer gift cards or other rewards. 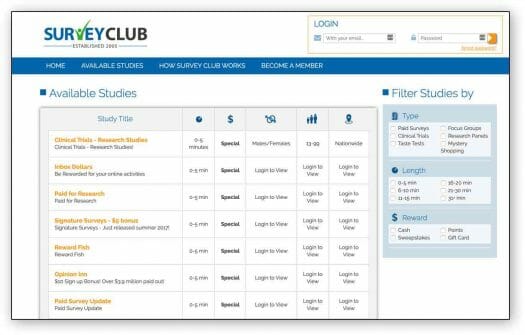 No matter how much each survey pays, you’ll only make a significant amount if you complete enough of them.

This is where things get tricky. You can only participate in studies you meet the criteria for, so the number of surveys you can do is really just a matter of luck.

However, you can boost your chances by joining lots of different panels so you receive as many surveys invites as possible. Also, Americans get invited to surveys more often than people from other countries.

You can also make some extra money through referrals. Survey Club offer $1 for each person you refer, which can quickly start to add up.

This is a great way to reach the minimum payout threshold quickly, especially if you have a wide circle of budget-conscious friends.

How To Sign Up And Get Started With Survey Club?

Getting started Survey Club is a very intuitive process that consists of four steps:

The initial registration process for Survey Club only takes a few minutes; you need to input basic information such as your name, date of birth, and ZIP code.

There are only two eligibility criteria: age and location. Location-wise, you must be from either the United States, Canada, Australia, or the United Kingdom.

There are some mixed messages about the age requirement – although Survey Club state 13-year-olds can join in their FAQs, you must be over 16 to submit your profile. Under-18s that live with a parent or guardian also need to ask for permission.

Once you’ve completed the basic registration, Survey Club require some further demographic information to match you with suitable surveys. These include questions about your income, employment, health, lifestyle, and more. 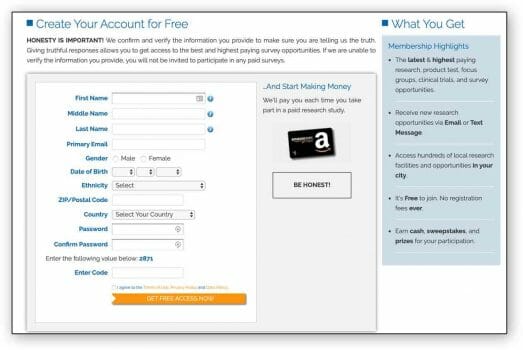 Once you’re all signed up, you can begin to look for surveys. To do that, you must join ‘panels.’ It might seem confusing to figure out which panels you should join, but don’t overthink it.

A panel is just a specific company looking for data. Survey Club recommends joining at least three, but if you’re looking to make as much money as possible, why not register with every single one?

When you see the list of choices, you might find that some of the panel names sound familiar. For instance, Ipsos and Epoll both have panels on Survey Club.

If you don’t sign up for any panels, you’ll be limited to Survey Club’s own surveys.

Now, it’s finally time to start making some money! Once you head to the ‘available studies’ section of the website, you’ll see a list of surveys you can participate in. Alternatively, you can receive alerts by email.

A great feature of Survey Club is the ability to filter the available surveys by their duration, type, payment method, and the genders, ages, and locations they’re suitable for. This helps to minimize the time you’ll waste on trying to complete surveys you don’t fit the basic criteria for. Any survey enthusiast will tell you how irritating this can be!

Yet despite the filters and demographic information you give to Survey Club when you register, you’ll still be asked a few basic questions at the start of each survey. This is just to check you’re genuinely eligible. So, no need to worry you’ve completed the process wrong!

One drawback of Survey Club is that many available surveys will redirect you to other sites, meaning you’ll have to do the sign-up process all over again. It’s time-consuming and tedious, but also means you have more opportunities to earn money.

When you’re answering the surveys, it’s tempting to put in random answers so you complete the surveys quickly, but there are often ‘trick questions’ to check you’re paying attention.

Once you have $20 worth of points, it’s time for the best part of all: withdrawing what you’ve earned! Survey Club exchange points for either PayPal withdrawals or gift cards for major retailers like Amazon.

Unfortunately, reaching the $20 threshold can take a while. It might not sound like much, but if you only get $1 per survey, that’s 20 surveys you need to qualify for and complete.

To complicate matters even further, only points you’ve earned on the Survey Club website count – not not surveys completed on websites you were redirected to. This is one of the major problems with the site, but as long as you’re patient and don’t need the money urgently, you should manage to meet the threshold.

What Are The Pros And Cons of Survey Club?

Survey Club is a great site, but it’s better-suited to some people than others. To help you figure out if it’s right for you, let’s break down its advantages and disadvantages.

What Are The Alternatives To Survey Club?

If you’ve decided Survey Club isn’t the site for you, don’t panic – there are many other options you can try instead. Signing up for a few different platforms to see which you like best, or even using multiple sites to maximize your earnings, is a great strategy.

Swagbucks is probably the best-known survey site. Having paid out over $240 million to its users, it’s easy to see why it’s so popular. Even better, they often offer generous signup bonuses of $5 or more.

More than just a website for surveys, Swagbucks allows you to earn points – known as Swagbucks – in multiple ways. For example, you can earn by watching videos, playing games, or even just browsing online. 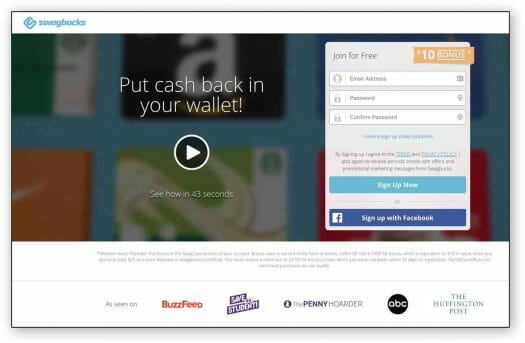 As well as completing activities on the phone app and website, you can install a Swagbucks browser plug-in. This way, you earn points for browsing even when you’re not on the site – this makes it easy to incorporate Swagbucks into your daily routine.

Like Survey Club, you can redeem these ‘Swagbucks’ for gift cards or money. Because of the multitude of activities, it’s possible to earn more than on a surveys-only website. However, Swagbucks is notorious for disqualifying users for survey after survey when they don’t meet the criteria.

Survey Junkie is very similar to Survey Club on the surface: you can earn points through completing surveys, and the number of members is almost the same.

One strength of Survey Junkie is the lower payment threshold: at just $10, you’ll be able to access your money twice as quickly. Another advantage is that you’ll be paid for each survey you complete, even if you don’t qualify.

Of course, taking online surveys isn’t limited to the three sites we’ve already talked about – there are numerous options out there. Here are a few more you might want to check out:

Survey Club is a legitimate site that offers moderate earnings and a good range of surveys from various sources. Plus, the inclusion of focus groups adds an extra dimension and gives the possibility of making serious earnings.

Having said that, Survey Club mainly works as a middleman that connects its members with larger survey sites. Unless you want to stick around for the focus groups, it makes little sense to use Survey Club instead of the bigger sites running their own surveys.