This High-Yielder Has Been Left For Dead. Time To Buy?

We got some good news for the energy sector over the weekend.

On Sunday, the OPEC+ nations agreed to cut 9.7 million barrels of production per day in May and June. That’s roughly 10% of global output – the largest production cut ever.

The cuts will take effect on May 1, and were negotiated by Saudi Arabia, Russia, and the United States. The big question is… will this stabilize oil prices? Will it stem the tide of job losses in the oil patch and the overstretched balance sheets of many independent producers?

Well, considering global energy demand is down about 35%, I wouldn’t hold my breath. Still, it’s a step in the right direction.

Bottom line, I’m not advocating that my High-Yield Investing subscribers go waist-deep into the energy sector just yet. As I’ve said repeatedly, now is the time to build a watchlist and only selectively put money to work in deep-value plays you feel comfortable with over the long-term.

But rather than focus on the negatives, today I want to tell you about another ticker to add to your watchlist. As I told my premium readers recently, all signs point to this being one of those rare opportunities that only come along during times like this – when the baby is thrown out with the bathwater.

A One-Stop Way To Buy MLPs

There are many high-quality names in the master limited partnership (MLP) sector with strategically-located infrastructure assets whose earnings capacity isn’t fully reflected in the market right now. If you’re looking for broad exposure to this undervalued group, then Kayne Anderson MLP (NYSE: KYN) is an ideal solution.

Kayne Anderson is a boutique money-management firm with $26 billion in assets under management. The company specializes in the oil and gas sector and is the largest institutional investor in the MLP space. It oversees an entire suite of funds dedicated specifically to midstream energy – and the KYN closed-end fund is the flagship.

These are well-known names among my High-Yield Investing readers. They are two of our oldest and most reliable holdings. Enterprise has raised distributions for the past 63 quarters in a row. Magellan has increased payouts 71 times since its 2001 market debut.

This Closed-End Fund Has Been Left For Dead

KYN’s holdings own vital assets that generate steady, predictable, fee-based cash flow. That income is tied to long-term contracts, tariffs, and other agreements that have little sensitivity to commodity price fluctuations.

Of course, the plunge in crude oil to the $20s has crimped exploration budgets and may temporarily curtail output. But considering there was a chronic lack of pipeline capacity before this downturn, most midstream companies will still see unwavering demand for their services.

Once this lockdown subsides, oil, gas, petrochemicals, and refined products such as gasoline and jet fuel will flow freely once again.

Today, the fund is changing hands near $4. 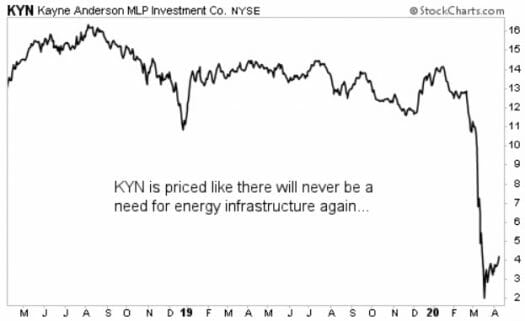 In the meantime, this fierce selloff is a good reminder that leverage can be a double-edged sword. Closed-end funds borrow money at low rates and then reinvest the proceeds at higher rates, a strategy that allows the portfolio managers to rake in more income. It works well – until the market tanks.

The use of leverage can magnify both gains and losses. And right now, it is working against KYN.

Closed-end funds must comply with debt covenants, as well as provisions of the Investment Company Act of 1940. Specifically, debt and preferred borrowings can represent no more than 50% of the fund’s total assets. That’s normally not an issue (leverage rates of 20% to 30% are common). But when stock prices fall and assets begin to dwindle in a downturn, this level can be breached.

Like many others, KYN has been selling positions en masse to maintain coverage ratios. As a result, it now has $560 million in cash to go along with $825 million in investments, for total assets of $1.43 billion. But the fund owes lenders $531 million and preferred stockholders $342 million.

That’s thinner than we would like. But don’t forget about the cash. There is enough there to completely pay off the $531 million in debt, with $29 million left to redeem preferreds. Under that scenario, the leverage ratio would improve dramatically to 267%.

As they say, selling begets selling. When a steep market pullback causes closed-end fund managers to liquidate, it only intensifies the selling pressure and accelerates the selloff. It can be worse in thinly-traded, illiquid asset classes.

Being forced to unload quality stocks at fire-sale prices is like rubbing salt in an open wound. That (along with widening discounts to net asset value) explains why closed-end funds have performed so poorly in recent weeks. For the record, KYN is trading at a whopping 18% discount to NAV as I write this.

So holdings like MMP are more than 40% off their recent highs. And KYN is a conduit to invest in them even cheaper, at just 83 cents on the dollar. In the meantime, the fund has been paying regular monthly distributions of $0.12 per share.

It’s been rough. But with a much stronger asset coverage, I think KYN is a smart vehicle for risk-tolerant income investors to gain broad exposure to the cash-generating MLP sector.

P.S. Let me ask you a question… How can a company like Apple barely bring itself to pay out a mere 77 cents every four months?

What a joke! Frankly, investors deserve more from the world’s richest company. Much more. And that’s exactly where this little-known opportunity comes in…

You see, I’ve found a way for you to siphon off a portion of Apple’s massive cash hoard for yourself… Without having to own a single share of its bloated stock. I’ll admit, it sounds crazy — but you can get all the details right here…