Are High-Yield Bonds Worth The Risk Right Now?

With economic activity at a standstill, it’s a foregone conclusion that we are going to see some high-risk corporate loans go unpaid – it’s only a question of how many.

Default rates in this sector have been relatively benign, running below 3%. But market observers believe they could easily triple to reach double-digit territory by the end of the year.

During the worst of the Covid-19 selloff, the average high-yield corporate bond was trading at just 80 cents on the dollar (down from around 100 a month ago). Bonds in the imperiled energy sector were driven down to 50 cents on the dollar. In turn, falling bond prices caused yields to shoot higher.

Then, the Federal Reserve stepped in. Aside from lowering interest rates, the Fed announced a number of programs aimed at stabilizing the economy and providing economic relief. There’s the Paycheck Protection Program, of course, which is understandably getting a lot of attention. But the Fed is also getting into the corporate bond business…

The Fed on March 23 announced it would for the first time purchase corporate bonds, backstop direct loans to companies and extend credit to small businesses. On Thursday, it said it would expand its bond-buying to include companies recently downgraded into junk territory as well as junk bond exchange-traded funds (ETFs).

This is truly unprecedented. But perhaps necessary. Widening spreads reflect the growing risk that many of these loans (which are issued by shakier borrowers) will go sour. Some are already trading at levels that investors would recover in bankruptcy court. The last time we saw spreads this high was during the 2011 European sovereign debt crisis, when Greece, Italy, and several other nations needed bailout intervention to stay afloat.

As this economic downturn deepens, we’ve seen iconic companies like Ford and Delta lose their investment-grade status. Many of the issuers that were already relegated to junk status have likewise seen their credit ratings taken down a notch or two. Even before the coronavirus hit, Moody’s reported that the number of credit downgrades was outpacing upgrades by a 2:1 margin. 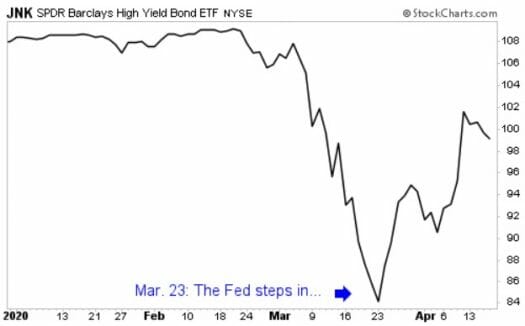 In less than a month, the SPDR High Yield Bond (NYSE: JNK) exchange-traded fund plunged more than 20%, a rapid and almost unparalleled pullback. According to the Wall Street Journal, there were 1,400 issues trading with yield spreads of 1,000 points or more – the threshold for distressed debt. That’s narrowed thanks to the Fed’s backstop, but there’s still a lot of uncertainty.

The 7% yield this fund still offers is enticing. But a lot of the rebound is due to the Fed’s actions, pure and simple. It’s still a safe bet that we’ll see more high-yield credit downgrades in the coming weeks. That will make it even harder for those companies to borrow or refinance.

To a large extent, these high yields are compensating investors for the increased risk. Still, with the U.S. economy virtually shut down, we are in uncharted territory here. That makes a fund like JNK too risky for my taste. It has substantial exposure to hotels, casinos, and other industries with little to no incoming cash flow to service debt.

I wouldn’t rush to get in just yet. Once this shutdown has ended, there will likely be some real pockets of value in this asset class. But for now, I think it’s best to watch from the sidelines.

P.S. There’s another popular investment I’m telling my readers to avoid. And this one could get me in a lot of trouble…

I’m talking about Apple. Yes, that’s right. I know it sounds crazy, but let me ask you this… How can a company like Apple barely bring itself to pay out a mere 77 cents every four months? Frankly, I think it’s insulting that income investors should be expected to settle for such a low payout.

Fortunately, there’s a better way… You see, I’ve found a way for you to siphon off a portion of Apple’s massive cash hoard for yourself… Without having to own a single share of its bloated stock. I’ll admit, it sounds crazy — but you can get all the details right here…