Should You Take A Risk On The Airlines Right Now?

It’s a bleak time for the airline sector. We all know that.

Just how bleak? Well, I spoke with a friend of mine recently (a pilot) who had three passengers on his latest flight. Three.

Of course, anyone who bought into airlines after the coronavirus pandemic set in should have known that going into the investment. After all, the thinking goes, an investment in one of the airlines is about what it can accomplish tomorrow, not what it’s going through today.

That may prove to be a successful strategy. But to understand just how hard it’s going to be, let’s think about an airline like Delta Airlines (NYSE: DAL) for a moment. I’m using DAL in this case, because it’s long been thought of as one of the best-managed, most successful operators in the industry.

Delta has just finalized terms for a massive cash infusion that will enable it to hunker down and weather this storm. As part of the stimulus package, the federal government has set aside $25 billion in financial aid for the struggling airline industry.

Delta stands to receive about $5.4 billion. Most of that ($3.8 billion) will be a grant, a gift that doesn’t need to be repaid. The rest will take the form of a low-interest loan. This cash will provide adequate liquidity for the company to meet its obligations during this challenging time when revenues have all but dried up.

The Treasury drove a hard bargain. It wants to be a good steward of taxpayer money, while also aiding a critical industry that employs 750,000 American workers. So this cash came with a few strings attached. First, as mentioned above, all recipients must agree to halt capital returns (both dividends and buybacks) until 12 months after the loans have been repaid.

Delta is also giving Uncle Sam warrants convertible into DAL shares. This gives taxpayers a small stake – and thus the opportunity to participate in a rebound once the sector regains its footing. Fortunately, the dilutive impact on existing stockholders will be minimal, as these warrants only represent about 1% of the outstanding shares.

Living To Fight Another Day

There are always mixed opinions when it comes to government lifelines. But this scenario is much different than the 2008 bank bailout. Those companies’ financial troubles were largely of their own making.

Delta and its peers did nothing wrong. This is an unforeseen health emergency. Right or wrong, mandatory travel lockdowns are preventing passengers from boarding planes. Since the government is banning non-essential flights, it bears some responsibility for this predicament.

Delta has cut systemwide capacity by 80% to 90%, and 10,000 employees have been voluntarily furloughed. Executives and board members have slashed their salaries by 50% to 100%. That will help keep expenses to a minimum until travel demand resumes. 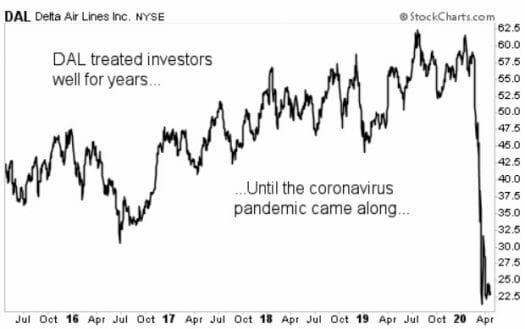 It may be 12-18 months, but eventually, Delta will return to full strength. What does that look like? Well, the company has generated more than $5 billion in pre-tax profits in each of the past five years. Operating cash flows have tripled over the past decade, and the company was returning 70% of its free cash flow to stockholders.

As you can see in the chart above, DAL was doing well for investors — until coronavirus came along.

That being said, if you’re looking for income, I think it’s wise to stay away from the stock until the dividend is reinstated. I am strongly considering DAL for my personal account, because I still believe patient investors will be well rewarded in time. But investors need to seriously consider their risk tolerance before taking a position and be ready to hold for the long-term.

P.S. I recently made one of the most controversial calls of my career…

I recently told my readers that they should sell Apple. That’s right. I know, it sounds crazy… But if you’re an income investor, then you need to strongly consider whether investing your hard-earned money in a company that only pays 1.2% is even worth your time. The same goes for Netflix, Google, Amazon…

Fortunately, there’s a better way. With little-known “backdoor” investments, you can earn more than you ever thought possible from big tech. If you’d like to learn more, simply follow this link.