The Death Of Stock Buybacks? Here’s Why It Matters…

Yesterday, we talked about Apple’s “hidden yield” – and how it could easily pull off paying investors north of 7% if the company focused on dividends rather than buybacks.

This wasn’t to pick on Apple, necessarily. It was merely to illustrate how much has changed over the years when it comes to how management decides to allocate resources. And that’s especially true when it comes to returning capital to shareholders.

If you remember, we said a “massive sea change” was happening as we speak on that point. I want to get into that more today, including what that means for us as investors…

The Rise Of Buybacks…

The truth is, Apple is hardly the only company favoring buybacks over dividends. It’s quite common. There are several reasons. First, the amount and timing of buybacks is elective, which means management can lower buyback expenditures at the drop of a hat. Cutting dividends has greater consequences…

Furthermore, as Warren Buffett would be the first to acknowledge, buybacks can be a highly potent use of capital when share prices are undervalued (just as they can be destructive when the stock is overpriced). Not only that, but buybacks are arguably more tax-friendly. Those capital gains are tax-deferred until the shares are sold. Dividends, on the other hand, incur an immediate liability for the shareholder.

Whatever the reason, buybacks were (note the past tense) a very popular tool. While S&P 500 companies earmarked $485 billion for dividends last year, they spent $728 billion on buybacks – on top of a record-shattering $806 billion the year before. That’s more than $2 billion per day. 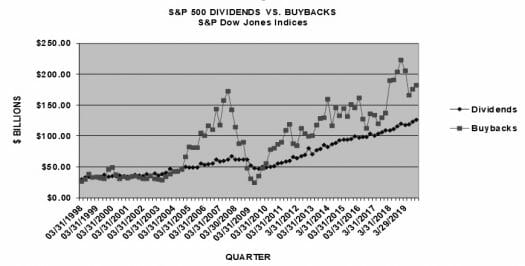 If you’ve been wondering why the average S&P dividend yield sunk below 2% recently compared to the 3% to 4% range in decades past, it’s not because companies are any less generous. It’s simply that they have chosen to return a greater portion through buybacks.

At least, that was the plan a month ago.

The End Of Buybacks?

What’s going on? Well, for starters, there has been a public outcry from certain politicians (mostly on the left) who despise stock buybacks. They would rather see this money spent on employee pay raises and portray buybacks as a vile, underhanded tactic to line the pockets of the wealthy.

But if you think this is just hot air from some blustering politicians, think again. The thing is, these arguments are taking hold. Don’t believe me? Watch this exchange on CNBC. For context, it’s a follow-up discussion of a heated exchange that went viral a couple of weeks ago. In it, you’ll see a former senior executive of Facebook (and current Silicon Valley venture capitalist) passionately advocate against buybacks.

I’ll just say this. Companies like Apple and Chevron have tens of thousands of shareholders, only a small portion of which are millionaires. Most are ordinary hard-working Americans investing for their retirement. When used correctly, buybacks enrich them all.

Still, for the sake of compromise, the recently-passed $2 trillion stimulus package contained provisions restricting the use of buybacks. Specifically, any company accepting government financial aid is barred from repurchasing stock until 12 months after the loan is repaid in full.

So buyback activity will come to a screeching halt in many corners of the market, including airlines, hotels, and retailers.

It’s All About Self-Preservation

Still, most CFOs aren’t beholden to the whims and pet projects of Washington bureaucrats. But they are pumping the brakes on stock buybacks for a completely different reason: self-preservation.

Most businesses have seen revenue collapse. Entire sectors of the economy have little to income right now. To preserve cash, companies of all shapes and sizes are slashing their discretionary spending to the bone. Sadly, many are also lowering dividends (at least temporarily) — while axing stock buybacks.

Perhaps sensing what was coming, repurchase activity slowed in the fourth quarter of 2019 to $180 billion. That’s a drop of nearly 20%. Goldman Sachs forecasts $370 billion in buyback expenditures, this year. That’s half of last year’s level.

The Good News For Us…

Where will that other $370 billion go?

Well, some buybacks were funded by debt. Those will just disappear for now. Some of that cash will also help shore up balance sheets and build a rainy day fund. But a good chunk (perhaps $50 billion or more) will be diverted back into the dividend column, especially once the economy regains its footing and cash flow visibility improves.

That’s great news for us, of course.

In fact, as companies hoard cash during this market turmoil, I’m predicting they’ll end up spending a good chunk of it on a “hidden” corner of the market…

Longtime pros have targeted this area of the stock market for successful picks in any market… up, down, and sideways. And thanks to the coronavirus pandemic, I think it’s about to explode.

That’s why next Tuesday, I’m going to host an emergency briefing on this opportunity and why I think every investor needs to allocate a portion of their portfolio to this market. The event is completely free to attend. We have limited spaces, however, and it will not air anywhere else other than on our exclusive website.

You can go here to secure your spot now.