Why It Pays To Think Like A Predator In This Market

Would you pay tens of thousands of dollars for a picture? What if it was a photo of a young Babe Ruth standing next to his father at their family tavern? Taken in 1915 (shortly after Ruth led the Boston Red Sox to a World Series title), there are less than five known prints in existence.

Such an item could be priceless to collectors. Well, not exactly. Everything has a price. In this case, the photo fetched $39,000 at auction, well below the $50,000 that was predicted. 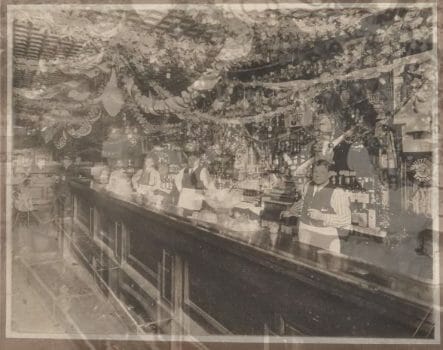 Other times they undershoot. A flawless 60-carat pink diamond went under the hammer in Switzerland a few years ago. Appraisers at Sotheby’s estimated a price of $60 million. They weren’t even close – the stone eventually sold for $83 million.

To be fair, it’s quite difficult to pin a price on rare or one-of-a-kind items. Vintage wine, original artwork, sports memorabilia, jewelry, historical artifacts, you name it. The best we can do is make an educated guess. Ultimately, the true value of any object is whatever somebody else is willing to pay.

The Price Is The Price…

Even in the stock market, there is always room for subjectivity. Take Amazon (Nasdaq: AMZN). One analyst has a “strong buy” rating on the e-commerce giant and believes it will reach a target price of $2,780 per share. Meanwhile, another thinks it will fall to $1,850 and is advising clients to sell.

Both “appraisers” are looking at the exact same set of financial statements. Yet, they differ in their assessment of the stock’s value by nearly $1,000 per share. With such wildly divergent opinions from top-notch analysts, you can see why everyday investors might have trouble knowing whether a stock is undervalued or overvalued.

Occasionally, though, we can remove the guesswork. Think of it as a final auction price.

Case in point, I used to own a mining outfit called Goldcorp. Aside from its low extraction costs and strong production growth, I felt the valuation was compelling. The market wasn’t assigning full credit to the company’s underground gold reserves and future cash flow potential.

In January 2019, Goldcorp shares were languishing in single-digit territory near $9.50 per share. The firm’s market value was just $8.4 billion at the time, a fraction of its previous high. But when the market has trouble recognizing a company’s fair value, it sometimes gets overruled.

In this case, rival Newmont Mining (NYSE: NEM) felt Goldcorp was worth every penny of $10 billion. So it extended a takeover bid valued at $11.50 per share, a nice premium of 20%. Some felt that bid was too low; others too high.

But those opinions didn’t really matter at that point.

The stock was worth $11.50 to the buyer. And that’s what investors walked away with when the deal closed three months later.

Pulling Back The Curtain…

And in case you haven’t guessed already, I’m talking about takeovers.

I shared several examples last week where I’ve been on the winning side of transactions like this over the years… Cincinnati Bell (100% in 3 months), Aircastle (125%), DirecTV (296%)… But as I mentioned, I can’t say for sure that I knew every single time that these companies would get acquired. I recommended them because they were quality, cash-generating businesses trading at an attractive discount to their fair value.

That being said, I had a hunch. That’s because any acquiring company values these same traits.

This got me thinking… What would happen if we could “reverse engineer” the process to pinpoint unsuspecting prey before they were stalked by a larger acquirer?

So I decided to spend some time doing a deep dive on takeover deals. I even assembled a research team to help me sift through all the data.

And I have to tell you… the deeper I looked, the more excited I got. Because the data were compelling… and convincing.

I’ve examined countless takeover targets in recent years looking for commonalities. It was an arduous and painstaking process. Here’s what I found…

Just as meteorologists are trained to spot wind shear and other telltale signs of an imminent tornado, there is a specific set of conditions that often precede a takeover announcement. It’s not rocket science — you just have to know what to look for.

That’s why my team and I have devised a 6-part screen to systematically comb through the market to find publicly-traded companies that are ripe for takeover. It’s called the P.R.E.D.A.T.O.R. screen.

I’ll be honest… I’ve never been a big believer in arcane “systems” or “quant” models that flash unmistakable buy signals. Quite frankly, many of them are garbage. There is no substitute for good, old-fashioned research and analysis. I roll up my sleeves and dig deep into the financial statements of every portfolio candidate. But I also believe in working smarter. And that’s what this time-tested buyout screen is all about.

I have adjusted and fine-tuned the methodology to isolate certain traits and characteristics associated with prime takeover targets. When this screen talks, it pays to listen. After all, even one of these buyout stocks can lead to a triple-digit windfall in your account.

I put each candidate through a series of six qualitative and quantitative tests. Many stocks fail to clear even one of these stringent hurdles. I don’t waste my time with them. I’m looking for the rare few that can pass through this gauntlet without being tripped.

When I find one, I get pretty excited. Because history (and mountains of evidence) tells me we’ve got a viable buyout candidate. And that is often the surest path to quick profits.

I’ll save the details of this screen for a later time. (There’s just simply not enough time or space to cover the nuts and bolts today.) But what I can reveal is one of the first candidates I found after putting this screen into practice. It’s not one of the high-upside candidates I’m already finding, so it won’t upset my followers too much to share it with you today…

If you read my piece last week, you know I teased a deal that was still “in play.”

That particular candidate was with the online brokerage firm E*Trade (Nasdaq: ETFC). The stock was limping along in the mid-$40s. Then, out of nowhere, it surged as high as $58 one afternoon.

And it happened without warning, occurring not over a period of weeks or months — but in a matter of hours. 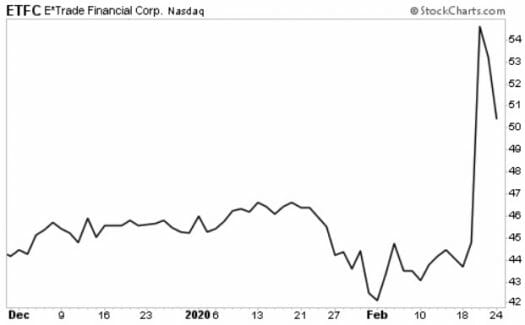 That takeover offer came courtesy of Morgan Stanley (NYSE: MS). And that 30% spike increased the net worth of E*Trade shareholders by roughly $3 billion. Traders who got in on this name thanks to my screen nabbed a quick profit.

As for long-term investors, yes, shares have sank back down. But there’s good reason for that… it’s because ETFC shares will soon be swapped for MS on nearly a 1-1 basis. So the shares are trading roughly in line. Among other benefits, that transaction will boost the annual dividends of long-term investors by 150% from $0.56 to $1.40 per share.

However you choose to end up using my screen, it’s up to you. But I can tell you that this system will deliver both conservative and aggressive trades alike. That’s one of the many benefits of this kind of investing…

I can’t wait to share more details about the opportunities I’ve already found with StreetAuthority readers in the coming weeks. Frankly, I think we’re sitting in the middle of a unique time in history right now. Of course, with the Covid-19 pandemic, nationwide “stay at home” orders, and the recent market selloff… you already knew that.

But this is also a unique time because it’s creating the exact recipe for a wave of historic deals in the months and years ahead. This is becoming a market of “haves” and “have-nots”. And I plan on being on the right side of all this once we come through this crisis (and believe me, we will).

In the meantime, if you’d like to learn more about the P.R.E.D.A.T.O.R screen and how you can take advantage, go here now.