One Of The Market’s Best-Kept Growth Secrets

My wife hates it. And my son treats the little discs like frisbees, tossing them around the room.

To tell you the truth, my Xbox gaming console hasn’t been used for gaming purposes in years. Between work, home renovations, my wife, and a one-year-old, I just don’t have the time anymore. But that’s OK.

I still have a lot of friends who still enjoy playing the latest iteration of Tom Clancy’s Call of Duty, FIFA soccer, or Madden NFL. And I also keep close tabs on the gaming industry for a number of reasons. For one, it typically doesn’t garner the attention that other industries do. It gets buried under the “Technology” banner, but many people don’t realize that the gaming industry is massive… and ripe for big gains.

A Giant Industry That’s Only Getting Bigger

Did you know… the gaming industry is two times larger than Hollywood?

The gaming space is expected to reach $200 billion by 2022 — and grow at a compounded average growth rate of 21%. That means even if you aren’t familiar with this space yourself, it could seriously benefit your portfolio to at least become somewhat familiar.

Think about this… The Call of Duty franchise — a first-person shooter game — generated more revenue than the entire Marvel and Star Wars franchises commanded at the box office, combined.

I’ve talked about the massive video game industry before. (Read this and this.) But needless to say, this is a huge — and growing — market with massive tailwinds.

A Booster Shot From Covid-19

Not that the gaming industry needed it, but the recent stay-at-home orders have provided a major boost to the gaming industry. The NBA, which postponed its season in March, is using this time to feature its ambitions for gaming. Viewers can log onto a game-streaming platform like Twitch or Mixer and watch a virtual match-up of, say, the Los Angeles Lakers and Phoenix Suns play out online.

Now if you’re thinking to yourself, “who would want to watch someone else play a video game?” Well, the answer is millions of people. In fact, in March, streaming platform Twitch (owned by Amazon) recorded a nearly 60% increase in viewership year-over-year, with more than 1,300 hours watched.

Just a couple weeks ago, 15 million participants logged on to Fortnite (arguably the most popular game right now) to watch Travis Scott’s (a music artist) in-game concert. It now has more than 23 million views on YouTube.

Microsoft (Nasdaq: MSFT) announced that it had record engagement for its gaming console, Xbox, with more than 90 million active users. 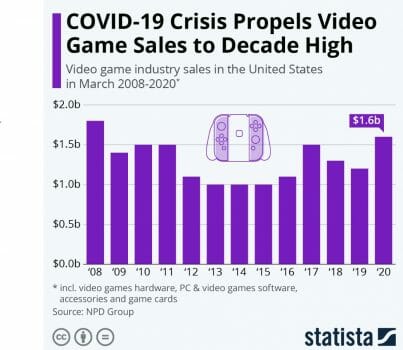 How I’m Investing In This Sector

Most of the top gaming stocks have reached new 52-week highs recently.

My Maximum Profit system has flagged another relatively unknown gaming company that passes with flying colors. It developed one of the most popular mobile gaming titles in the world — the most downloaded mobile game in 2019 with 60 million daily active users, and more than 450 million registered users.

Unfortunately, out of fairness to my subscribers, I can’t share the name of that pick with you today. But as you can see from the table below, two of the largest gaming stocks — Electronic Arts (Nasdaq: EA) and Activision Blizzard (Nasdaq: ATVI) — are both sporting strong relative strength ratings above 70.

While neither of these stocks passes the complete stringent requirements to add to my portfolio over at Maximum Profit, these two stocks are viable options for investors who want to look into this space.

In the meantime, my colleague Nathan Slaughter has developed a proprietary screen that uncovers how Wall Street rigs certain stocks that are involved in a “hidden” market. But thanks to his simple 6-part screen, you can jump in before these stocks soar.