One Of The Biggest Growth Catalysts I’ve Ever Seen…

The senior citizen population is exploding. In fact, the 80+ crowd will double in size over the next 20 years. It’s a demographic certainty.

The Staggering Numbers Behind Healthcare Spending

We can be equally certain that this group will rack up a colossal amount of healthcare expenditures. It’s a well-known fact that overall healthcare spending accounts for nearly one-fifth of the nation’s entire GDP. According to the Centers for Medicare and Medicaid, per-capita spending now stands at nearly $11,000 per person — or $3.6 trillion total.

That’s triple what was spent just three decades ago. 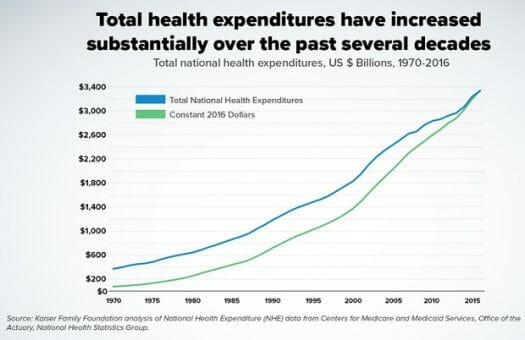 Even by government standards, $3.6 trillion is an astronomical sum. And it’s not going to shrink anytime soon. In fact, forecasters expect healthcare costs to rise to $5.7 trillion by 2026. That means in less than a decade, we’ll be spending $2 trillion more per year than we already do now.

That’s a depressing thought for anyone paying for private health insurance. But from an investment standpoint, I can’t think of another sector with such a long and wide growth runway. Trillions of dollars are being thrown around. And it’s showing no signs of slowing. Opportunities abound, from tiny biotech drug developers to surgical device and lab instrument makers to the insurers cashing all those monthly premium checks.

Of course, this sector is also ripe for buyouts. Take the pharmaceutical industry. Facing the loss of patent protection for core products, deep-pocketed drug makers are gobbling up smaller firms with exciting new therapies to rejuvenate their pipelines.

GlaxoSmithKline (NYSE: GSK) struck first with the purchase of oncology-focused Tesaro. Bristol Myers Squibb (NYSE: BYM) responded with the $74 billion acquisition of Celgene. Eli Lilly shelled out $235 per share (a 68% premium) to scoop up Loxo. Not to be outdone, Abbvie (NYSE: ABBV) teamed up with Allergan.

These won’t be the last such deals. But today I want to steer your attention to a different corner of the healthcare world…

Get In on the Ground Floor of This $185 Billion Industry

Picture yourself sitting in a crowded waiting room. You’re surrounded by sick people, waiting on a battery of uncomfortable tests. It’s already been 45 minutes since your scheduled appointment time, but you still haven’t been called back yet.

It’s never a great way to spend your morning — even before the era of Covid-19 and social distancing.

Fortunately, there’s a better way. We live in an era of FaceTime, Skype, and lightning-fast 5G internet connections, where video chats with remote friends and family can be done with the click of a button. You might even be one of the millions who dial into regular weekly teleconferences with coworkers.

Why not consult with your doctor or healthcare provider the same way?

Welcome to the world of telemedicine. If it’s just a routine question — and not, say, a broken limb — you can get fast answers from the nearest phone, tablet, or computer. And you can interact with your physician from the comfort of your own home, without driving across town and possibly subjecting yourself to an infectious disease.

That’s literally putting your health in the palm of your hand.

What was once a curious novelty is rapidly becoming a mainstream service. And while many people would gladly pay extra for the convenience, telemedicine can actually save you money. Data collected by 650 patients at Jefferson Health found that virtual doctor visits saved the average patient $121 compared to visiting the clinic — or up to $1,500 if they avoided a hospital emergency room.

Telemedicine Is Becoming A Big Business

At this point, less than 2% of Americans have taken advantage of telemedicine. But that number is rising… fast. There’s the aforementioned convenience and cost savings. (Another study done by Massachusetts General Hospital, by the way, found that nearly four-in-five patients preferred a virtual follow-up meeting to an in-person meeting.)

Telemedicine is also far more accessible, particularly to rural patients who don’t live near a primary care doctor. It has been estimated that the average wait for a new patient to see a general physician is 24 days. Even then, roughly half left a scheduled appointment early because they grew tired of waiting.

There is also the issue of uninformed patients clogging up emergency rooms with easily treatable symptoms. About two-thirds of all emergency room visits are avoidable, driving up costs for employers and insurers. Web-based consultations and e-prescriptions can help solve all of these problems.

That’s a big reason why 90% of all mid- and large-size employers now offer some type of telemedicine. Nearly half of all Millennials polled rate telemedicine as a “very or extremely important” option. Even Baby Boomers are using telemedicine more, and that group isn’t always receptive to new technologies.

Penetration rates will rise as patients become more comfortable meeting with their doctor over the phone for a quick chat. There’s no doubt that the Covid-19 pandemic will only accelerate the transformation.

Even before shelter-in-place orders, the growth forecasts were jaw-dropping.

According to Fortune Business Insights, the global telemedicine industry generated about $34 billion in revenue last year. That total is expected to climb at a 24% compounded annual growth rate (CAGR) as the technology expands into new arenas (including dermatology, cardiology, and psychiatry) — skyrocketing to $185 billion by 2026.

How You Can Profit

Unfortunately, most of the names in this group (such as Doctor on Demand and MDLive) are privately-owned, accessible only to privileged insiders and venture capitalists. But one of the early frontrunners conveniently trades on the New York Stock Exchange. And over the past four years, the stock has soared from $10 to near $200 — delivering a massive return of nearly 1,600%. 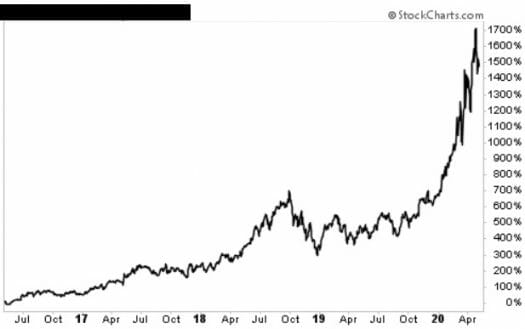 This stock has jumped more than 50% just since the beginning of March as its importance during the Covid-19 pandemic came into focus. Yet, there is still room to run.

That’s because we are in the early innings for this disruptive new service. And after seeing the latest quarterly report, analysts have been scrambling to raise their price targets.

You can understand why. This is one of the dominant leaders in an untapped industry that’s growing at an incredibly rapid pace. But I think this platform will be acquired long before then. And it could lead to massive overnight gains for investors.

Unfortunately, I can’t share the name of this pick with you today. That’s because it’s reserved for premium subscribers to my new service, Takeover Trader.

In case you missed it, I recently gave an emergency briefing to our readers, telling them why I think we’re about to see an unprecedented wave of takeovers in the months ahead. And I’ve spent months perfecting a 6-part screen, allowing my readers to get in on these deals before they happen — and potentially unlocking triple-digit upside in the process.

If you want to get in on the ground floor of this exciting new service — or simply learn more about it — go here now.