Welcome To The New Golden Age For Takeovers

These are by no means isolated examples. Clearly, it can pay off handsomely to spot potential takeover targets ahead of the crowd.

As I explained recently, I’ve been on both sides of these transactions over the years. And believe me, when you have a position in a company that has an offer on the table, seeing that stock spike is one of the most satisfying feelings an investor can have.

After all, it validates everything you thought about the investment going into it in the first place.

And this got me to thinking… What would happen if we could “reverse engineer” the process to pinpoint unsuspecting prey before they were stalked by a larger acquirer?

After months of painstaking effort, I came up with the P.R.E.D.A.T.O.R screen. It’s a 6-part tool I use to identify potential takeover targets before they happen. And it’s a key part of my new premium service, Takeover Trader.

Now, of course, there’s no magic solution that will identify these deals every single time. But after years of studying takeovers, I’m convinced that the biggest takeover targets leave a trail of breadcrumbs for investors. And my system can pick up the trail before these deals happen.

Let me give you an example.

Go Where The Action Is

As the competitive environment changes, every player is forced to adapt — and that often means scrambling to find a dance partner. So to increase our odds of landing a takeover target, the P.R.E.D.A.T.O.R. screen points us to the waters where the feeding activity has been the strongest.

When consolidation takes hold of an industry, it might not let go for years. The joining of two powerhouse companies alters the balance of power, forcing others to follow suit or get left behind. In some fields, M&A activity seems to be practically contagious.

Look no further than the biopharma sector, which has seen a string of game-changing deals over the past couple of years.

GlaxoSmithKline (NYSE: GSK) struck first with the purchase of oncology-focused Tesaro. Bristol Myers Squibb (NYSE: BYM) responded with the $74 billion acquisition of Celgene. Eli Lilly shelled out $235 per share (a 68% premium) to scoop up Loxo. Not to be outdone, Abbvie (NYSE: ABBV) decided to team up with Allergan.

For every mega-deal like these, there have been dozens of smaller “bolt-on” acquisitions that were just as rewarding for the target. Biogen latched onto start-up Nightstar Therapeutics to get a foothold in the ophthalmology arena. Merck (NYSE: MRK) completed its takeover of ArQule.

I could go on, but hopefully, you get the point. The important thing to know is that investors who were in on these targets beforehand made out like bandits. And this isn’t the only industry with frenzied deal-making activity. Cloud computing, oil & gas, mining, and financial services, among others, have all been busy.

I plan on taking advantage of deals in every single hot corner of the market over at Takeover Trader.

Going where the action is sounds simple enough, but it’s only the first of a rigorous six-step process.

The point is, pinpointing potential takeover targets isn’t an exact science. But the criteria laid out in the P.R.E.D.A.T.O.R. screen can help narrow the field and improve your odds dramatically.

And the timing couldn’t be better. The macro conditions for deal-making activity are red-hot.

Consumers like you and me are more likely to go shopping when our bank accounts are full. The same is true of most corporations (who also have the luxury of using inflated stock prices as currency).

Amazon (Nasdaq: AMZN) is sitting on $36 billion in cash, equivalents, and liquid short-term securities. Apple (Nasdaq: AAPL) has over $100 billion in cash and marketable securities. And Berkshire Hathaway (NYSE: BRK-A) has a $125 billion cash hoard — mountains of money for Warren Buffett and his top lieutenants to go “elephant hunting” as he once famously said.

S&P 500 members alone have a $2 trillion cash hoard. For perspective, that’s more than the GDP of Brazil or Russia. It’s also enough idle cash to buy a mid-sized business like Best Buy (NYSE: BBY) 100 times over. Combine that with dirt-cheap borrowing costs, and there is plenty of funding on the table.

Not only will these giants have the means to swallow up smaller competitors, but also the motivation. Executives are always under pressure to grow the bottom line, which isn’t easy in this environment. At least not organically.

An Invitation To Join Me

We’re sitting at a unique moment in the history of the stock market. The Covid-19 pandemic has swept through the world, creating a lot of uncertainty.

While it’s sad and tragic from a health and human perspective, my job is to help my subscribers make money. And I can say with confidence that this has also created a rare opportunity for a historic number of deals in the months and years to come.

As I’ve said before, this is a market of haves and have-nots. Expect to see many companies form strategic alliances, unlock synergies, and grow profits the old-fashioned way — by buying them. 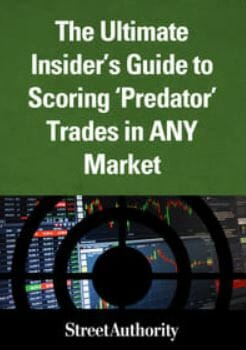 In doing so, they might also get to skip past the years of work often involved in turning a raw idea into a viable product or service. Even Warren Buffett concedes it’s much easier to buy a competitively advantaged business than to build one from scratch.

This almost always means a bonanza for investors in the right place at the right time.

With all this in mind, I hope you are ready to start thinking like a predator. We’re already deploying the P.R.E.D.A.T.O.R. screen and strategically taking positions in a few targets over at Takeover Trader.

And a few spots have just opened up – so you can join us before the deadline at midnight on Wednesday.

Remember, these gains appear almost instantaneously. So you’ll want to get in as soon as possible before it’s too late. In fact, one of our first trades we just closed delivered a 150% gain in 7 days.

To learn more about the P.R.E.D.A.T.O.R system and my new service, click here now.