Our Expert Strategists Weigh In On The Rebound

Do you know the story of the Zen master and the little boy?

There’s a village and a kid gets a horse for his 14th birthday. The villagers say “how wonderful, the boy got a horse.” The Zen master says, “we’ll see.”

Then a couple of months later the boy falls off his horse and breaks his leg. The villagers say “how terrible.” Zen master says, “we’ll see.”

Then a couple of years later a war breaks out. All the young men have to go off and fight – except the boy, because of his leg. The villagers say “how fortunate for the boy.”

If you’ve seen the movie Charlie Wilson’s War, then you know it deals with Congressman Charlie Wilson’s efforts to secure funding to aid the Afghan people in their fight against the Russians at the end of the Cold War. Achieving a bipartisan consensus (along with help from the CIA), their efforts ultimately proved successful. And many attribute the Afghan War as one of the key actions that precipitated the fall of the Soviet Union.

But you probably remember the dialogue I just recounted from this scene at the end. As the story of the Zen master and the little boy is being told, an airplane flies ominously above their heads. The implication is clear. Did they just enable the rise of the Taliban, ultimately leading to the events of September 11, 2001?

Of course, nobody had the foresight to fully anticipate the second and third-order effects of their actions during this compelling part of history.

See where I’m going with this?

It’s important to bear this in mind as we think about how the market has come roaring back after the lows set by the Covid-19 pandemic. The actions taken by the President, Congress, the CDC, the Federal Reserve, and state and local governments across the country are all truly unprecedented. States are slowly reopening across the country as we speak.

Does that mean the rally we’ve experienced since then justified?

In the meantime, let’s check in on some of our premium experts and see what they’re telling their readers.

Jimmy Butts: “This is the key level I’m watching…”

For starters, Jimmy Butts, Chief Strategist of Maximum Profit, is telling his subscribers about an important level he’s watching in the market that could offer a clue as to where we’re headed next…

…there are levels in the S&P 500 that are sort of the line in the sand between bulls and bears. If the market reaches that level, I know that whichever side it breaks to, the market will likely keep heading that way in the short run.

Right now, we have a pretty big trading range (of course there are smaller key levels within this range). But for our purposes, I’m looking at the slightly bigger picture (one to three months out).

For the last month, the S&P 500 has set some key levels that I’ve been watching. The first is around the 2,942 mark. The other key level is around 2,785. This has been the range that market participants have set.

If the market closes below 2,785, I expect it to continue to drift lower down to 2,720 mark and possibly even lower.

On the upside, I need to see a strong close above 2,942, and the market will likely make another leg up. 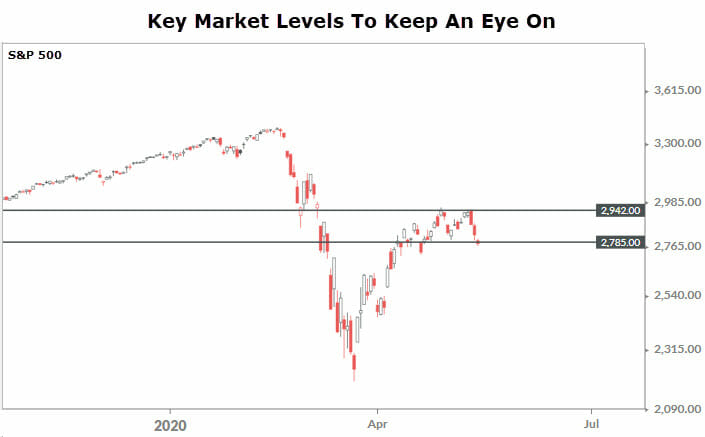 You can see the range defined in the chart Jimmy shared with his readers. The S&P closed Friday at 2,863. Look for what happens with the market action next week and monitor these levels to get a clue as to who wins in this tug-of-war between the bulls and bears.

Next, as my colleague Nathan Slaughter notes, not every oversold stock has fully recovered just yet. And that has Nathan and his subscribers licking their chops over at his newly-launched service, Takeover Trader. Here’s why, in Nathan’s own words…

There are attractive discounts as far as the eye can see. So if you’re a CEO or private equity manager with vaults of idle cash waiting on the sidelines, this is an opportune time to pounce.

Buyers are always more motivated to go shopping when there are deals to be had. That’s true regardless of whether you are buying a few shares or an entire business. Keep in mind, the primary responsibility of any CEO is to deploy money wisely. You don’t spend hundreds of millions (or billions) of shareholder capital without answering some tough questions.

Among them, what are the projected cost savings and revenue synergies from the merger? A takeover only makes financial sense if those benefits outweigh the premium and the purchase is eventually accretive to the bottom line. Deals that might have been economically inadvisable at $50 per share could be far more inviting at $30 or $40.

All of which is to say, buckle up.

Now, to be clear, Nathan doesn’t think everything is all sunshine and roses. In fact, he expressed a deep sense of worry early on about the way the nationwide lockdowns have been handled, particularly the economic consequences.

But as we’ve noted before, Nathan and his staff think we’re about to enter a Golden Age for takeover activity in the coming months. This will mean opportunities for investors who do their homework and get in before these deals are announced.

And while the opening slots for Nathan’s new service are filled for the time being, you can put your name on the waitlist here.

Amber Hestla: “This is a trader’s market”.

Meanwhile, Amber Hestla is telling her readers that the potential for the rally to continue is “significant.” But as she notes, there’s little reason to justify it.

As she notes, earnings are terrible, valuations are high, and even Warren Buffett is sitting on the sidelines (for now).

Not all investors are ignoring fundamentals. Warren Buffett held his annual meeting last week and noted that he was not a buyer in the decline. In fact, he was a seller.

Buffett told investors that during the selloff, he sold all of his airline stocks, a $4 billion stake that included positions in United, American, Southwest, and Delta Air Lines.

He noted that, “the world has changed for the airlines. And I don’t know how it’s changed and I hope it corrects itself in a reasonably prompt way. I don’t know if Americans have now changed their habits or will change their habits because of the extended period.”

“I think there are certain industries, and unfortunately, I think that the airline industry, among others, are really hurt by a forced shutdown by events that are far beyond our control.”

In clear words, he stated, “Our airlines position was a mistake.”

Amber continued by saying that this is a market for short-term traders and that long-term investors should follow Buffett’s lead and remain in a holding pattern for the time being.

Personally, I don’t necessarily think long-term investors should stay on the sidelines completely. Like Nathan, I’ve been a cautious buyer over the past two months. There are opportunities out there. But I am still skeptical about our chances for a shorter recovery.

It’s going to be tough at first, which is why I do agree with Amber’s sentiment that this is a trader’s market. And that’s why it helps to have a proprietary trading strategy working for you that routinely racks up profits regardless of economic cycles or wild market moves.

That’s where my colleague Jim Fink comes in. Even the pandemic can’t derail his system, which has delivered winners on 94% of closed trades. Jim and his team are about to reveal the next winning trade and there’s still time to get on board. Go here for all the details.