Is It Time To Take A Chance On Retail?

The stock market is truly bizarre.

Think about this… In the first quarter of the year, gross domestic product (GDP) contracted roughly 5%. The unemployment rate is currently 14.7%. Our national debt is more than $24 trillion and climbing.

And here’s the thing, the numbers aren’t expected to get any better. The Federal Reserve thinks that GDP could shrink by an annualized 30% in the second quarter, and the unemployment rate could jump as high as 20%-25%.

Retail Is In The Trash Bin

To exacerbate things, on Friday, May 15, the retail numbers showed just how bad things have been for many retailers. 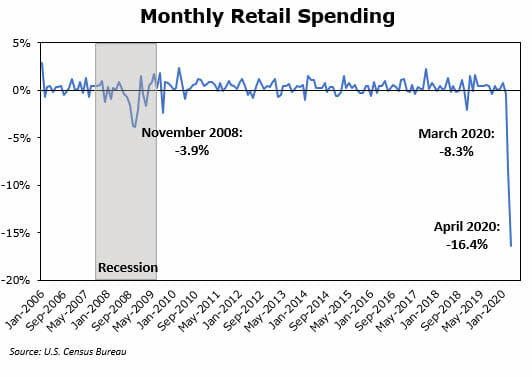 The April report showed that on a month-over-month basis (comparing April 2020 with March 2020), retail sales plummeted more than 16%. For comparison, the greatest month-to-month drop-off during the 2008 financial crisis was 4%. On a year-over-year basis, April sales fell 22%.

Diving deeper into retail segments, clothing and clothing accessories were hit the hardest (down 89% year-over-year), next was furniture stores (down 67%), and finally department stores (down 47%).

While investors had been bracing for a poor retail sales report, this news was worse than feared. Going into the report, estimates were for a 12% drop in the headline number, versus the 16% collapse.

Of course, JCPenney’s problems long predated the coronavirus. But it’s still astonishing to see this iconic 118-year-old retailer on the chopping block. Of course, the company could stage a comeback after bankruptcy, but industry analysts think that’s unlikely.

Is It Time To Buy This Retailer?

It’s clear the pandemic has been tough on retailers of all kinds. Many more will likely file for bankruptcy or close their doors permanently. So, it brings us to the question of how a once-solid clothing conglomerate like PVH Corp (NYSE: PVH) is faring, and what it’s future looks like.

PVH boasts a portfolio of strong brands, including Calvin Klein, Tommy Hilfiger, and Van Heusen. The company generates the majority of its sales (84.6%) from its Tommy Hilfiger and Calvin Klein brands. The remaining comes from its Heritage Brands portfolio, which contains the IZOD, Arrow, True&Co., Warner’s, Olga, and Geoffrey Beene brands.

Management has taken steps to curb expenses including suspending compensation for their board of directors and reducing salaries. And the company has furloughed and decreased working hours and salaries for hundreds of employees across North America. They’ve suspended share repurchases as well as the cash dividend. They also aim to reduce capital expenditures to around $190 million from $345 million in 2019.

In short, the company is making every effort to preserve liquidity, cut costs, and successfully navigate this health pandemic. The goal is to come out the other side intact and in a place where it can return to long-term growth.

These numbers are expected to fall drastically for 2020… Analysts expect the company to pull in over $7.9 billion in sales — which would be a 20% decrease over last year. Earnings per share are expected to plummet roughly 75% year-over-year, and free cash flow is expected to come in at $189 million.

PVH has $503 million in cash on hand against $4.1 billion in total debt. However, short-term debt is only $63 million, and current lease liabilities are $363 million. So it has enough cash to cover short-term obligations.

Obviously, the year-over-year numbers are expected to be terrible, but the bright side is that the company should still generate positive free cash flow.

Right now, shares are only trading for eight times earnings, with an EV/EBITDA ratio of 6.3. The company hasn’t traded for this cheap since 2009.

A Contrarian Play Or Value Trap?

The stock has tumbled roughly 60% year-to-date. Retail is hated, no doubt about it. It’s clear the industry will face stiff headwinds for the remainder of the year.

This begs the question… is this a contrarian play, or a value trap?

I am going to go with contrarian play. Here’s why…

Yes, folks have stopped buying clothes at the moment, but that won’t last forever. People will still need new apparel. I see PVH in a similar vein as the restaurant industry, the airline industry, and cruise lines — all industries that have been devastated by the coronavirus pandemic. All these industries are currently hated — even Warren Buffett came out recently letting folks know he dumped his airline stocks.

Financially, PVH is still strong. It’s anticipated to remain free cash flow positive, and it’s doing what it needs to do to cut costs and preserve liquidity.

Just because the company has a portfolio of strong brands, solid financials, and is trading for cheap… doesn’t mean that I won’t be wrong. My investment thesis could very well be wrong. Especially if the company doesn’t adapt…

As the company reopens stores around the globe under strict new guidelines, it will face added costs. But if PVH gets it right, it could lead to a new, more personalized shopping experience for many customers.

There’s no question that the company will face significant headwinds for the remainder of this year. But I think if management takes the right steps, it will quickly return to growth.

I will be keeping a close eye on the company. And shares will likely see continued volatility. But I think PVH is a “buy” under $50.

In my premium newsletter, Top Stock Advisor, I look at every downturn as an opportunity. It gives us the chance to pick up some of our favorite stocks at a discounted price. And because we have a plan in place for each holding, my subscribers and I can get a good night’s rest.

My plan isn’t to shoot for the moon on risky fly-by-night stocks. Instead, my goal is to find the absolute most dependable stocks the market has to offer. If you’d like to take charge of your portfolio and learn about my latest research, visit this link.