It sounds like the opening line of a joke.

A lawyer and a pilot walked into a bar in San Antonio, Texas.

But this was no joke. The two men met, scribbled a business plan on the back of a cocktail napkin, and changed history.

That’s not an overstatement, either. What they came up with was revolutionary, so much so that it threatened an entire industry and required a U.S. Supreme Court battle to make their dream a reality.

Today, it’s the most successful company in its industry. And right now, it’s trading for cheap. More on that in a moment.

But first, let’s go back to that night in the San Antonio bar…

The Fight To Fly For Cheap

In 1967, Herb Kelleher, a lawyer, and Rollin King, a pilot, sat down in a hotel bar and drew a triangle on a cocktail napkin. The three lines connected Dallas, Houston, and San Antonio. It became the first route map for their new airline.

By staying within state lines, they believed they could bypass the heavy federal regulations of the time. You see, prior to 1979, the federal government tightly controlled interstate air travel. It was the government that decided which airlines flew where and at what price.

Looking back, it sounds downright un-American. But for our older readers, you may remember a time when competition on interstate airline routes was virtually nonexistent. Federal regulators, not the market, determined price.

Kelleher and King were looking to change all that with their new company, Southwest Airlines (NYSE: LUV). 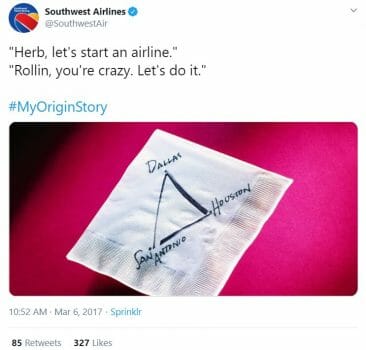 On June 18, 1971 the new airline began its three-city route with passengers. With a tiny fleet of three Boeing 737s…

It did well. In fact, by year-two, the company turned a profit. This was nearly unheard of in the airline industry.

The company’s success helped influence the 1978 Airline Deregulation Act, which loosened the federal government’s grip over areas such as fares, routes, and market entry of new airlines. The act introduced a free market in the commercial airline industry, which boosted the number of flights and lowered fares.

After the Airline Deregulation Act, Kelleher and King announced that they would add another city — New Orleans — to their service, their first non-Texas flight. It also proposed a Dallas-to-Chicago flight. But the larger airlines (namely American Airlines) and officials of Dallas and Fort Worth, co-owners of D/FW Airport, weren’t interested in seeing this young fledgling company succeed.

So they asked House Majority Leader Jim Wright to try and stop the expansion.

Wright originally proposed to prohibit any flights out of the smaller Love Field airport beyond the Texas state line. That would have essentially capped Kelleher and King’s market to just Texas. It was eventually revised to allow flights from Love Field to Texas and four adjoining states — Oklahoma, Arkansas, Louisiana, and New Mexico.

These restrictions on Love Field — known as the Wright Amendment — were signed into law in February 1980. They remained substantially intact for the next 26 years (Alabama, Mississippi, and Kansas were later added to the amendment in 1997, and Missouri was added in 2005).

Despite the many hurdles that Kelleher and King faced, their little airline persevered. In fact, it quickly grew into one of America’s largest airlines.

A lot of the company’s early success had to do with Kelleher’s management style. Under his leadership, Southwest bucked every trend and stigma of the airline industry.

Through shrewd competition, aggressive marketing, and creating a friendly culture, Kelleher zigged where the airlines zagged.

For example, when Southwest first started, all the large airline companies operated a classic hub-and-spoke route system. This means airlines have a centralized hub and fly mainly out of that hub. This route system allows for fewer routes and more frequent flights.

However, Southwest operates on a point-to-point network, which minimizes connections and travel time. It also reduces the chance of disruption. So if you have a centralized hub, say in Chicago, and a snowstorm shuts down the airport, that creates havoc among all your flights. With a point-to-point network, in that same scenario, it simply means your flights to Chicago are delayed. All other flights operate as usual.

This is just one of many innovations pioneered by Southwest under Kelleher. But people may remember him best as the chain-smoking, Wild Turkey-drinking CEO in Southwest’s often-wacky commercials, where they would make fun of the other airlines (or of Kelleher himself). Or they may remember the famous “Malice in Dallas” publicity stunt that earned Southwest a ton of free media.

It’s no wonder then, that Kelleher was called America’s best CEO when he was at the helm of Southwest (Kelleher sadly passed away in January last year). And by championing the “freedom to fly” idea, Southwest became synonymous with high-quality, low-cost flight for millions of Americans. (It’s also thanks to the culture he created that you might board a plane and see the flight attendants do something creative and entertaining, like this…)

But at the end of the day, it’s all about profitability. And Southwest totally bucked the profitability stigma among the airline industry. For years, major airline companies would operate at a loss, file for bankruptcy, get bought out, and require massive amounts of capital to continue operations.

But Southwest has remained profitable for 47 consecutive years. Unprecedented for the industry.

You may have seen the headlines where Warren Buffett’s Berkshire Hathaway (NYSE: BRK.B) dumped all its airline holdings (including his Southwest Airlines stake) in May. (It turns out he didn’t exactly heed his own advice from his 2007 shareholder letter).

But we’re not buying the airline industry. Over at Top Stock Advisor, we’re investing in Southwest Airlines — the best of the breed.

Southwest has grown into the nation’s largest airline. It commands a 22% total domestic market share. It maintains an impeccable balance sheet with ample cash and modest debt. Over the years, management has carefully balanced market expansion opportunities, operational reliability, and financial returns.

Tomorrow, I’m going to follow up and delve into why I think Buffett is wrong. And more importantly, why I think buyers of LUV will come out as big winners in the long run.

In the meantime, I’d like to invite you to check out our latest research over at Top Stock Advisor right here.