Buffett Is Wrong About This Stock. Here’s Why…

Yesterday, I told you the story of Southwest Airlines. But it wasn’t just to entertain. It was to demonstrate one major reason why I think Southwest as a best-of-breed operator in its industry will survive the Covid-19 pandemic and end up being a successful investment for those who are willing to step in at today’s depressed prices.

I also mentioned that by doing this, we’re doing exactly the opposite of what Warren Buffett is doing. He believes the world and the aviation industry have changed significantly from the coronavirus pandemic.

Who am I to disagree with arguably the world’s greatest investor? Well, I’m going to…

Yes, running an airline company is a capital-intensive endeavor. Planes aren’t cheap, fuel prices can rapidly fluctuate… There are heavy regulations, and of course, there’s all the maintenance, upkeep, employees (and their unions) to deal with. It’s easy to see why Buffett derided the industry back in 2007.

But I want to get more detail on why I think we’re right and Buffett is wrong (with all due respect, of course.)

It cranked out profits after the 9/11 attacks, throughout the financial crisis, the swine flu in 2009, and the grounding of Boeing 737 MAX airplanes last year. I don’t disagree with Buffett that the coronavirus will change things, including in the airline industry. But I do believe that people will go back to flying.

The pandemic will most definitely impact the finances of Southwest and every other airline. In the first quarter of 2020, sales dropped a whopping 17.8%. And it’ll likely be even worse when Southwest reports second-quarter results in July. The last time it reported a quarterly sales drop of that magnitude was during the fourth quarter of 2001 when sales slid 15.7%. That was the quarter following the 9/11 attacks.

Moreover, Southwest Airlines will likely end its 47-year record of profitability this year. There’s no doubt that Covid-19 will put a massive damper in the financials of Southwest Airlines. However, the company is well-positioned to weather this storm. It has more than $13 billion in cash on hand. Its current cash burn is about $700 million a month. That means it can continue operating for the next 20 months even if there’s absolutely no recovery in demand.

But we’re already beginning to see an uptick in flight demand: 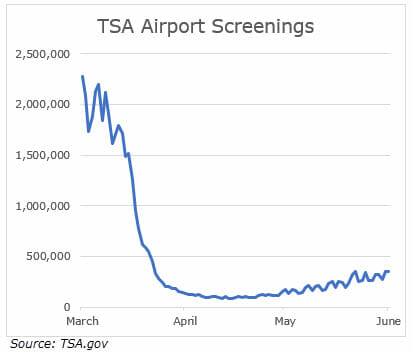 As you can see, airport screenings plummeted as states went into lockdown. On March 1, the Transportation Security Administration (TSA) screened nearly 2.3 million passengers. By the end of March, it sunk to just 150,000. It bottomed on April 14, with only 87,500 passengers screened. A stark contrast from the same day a year prior when it screened more than 2.2 million people.

Since bottoming two weeks ago — and as states slowly lift restrictions — folks have trickled back to the airport. At the end of May, it screened 353,000 passengers — a 310% increase from its April lows. Yes, it’s still a far cry from how many people TSA normally screens, but it’s a step in the right direction.

As I mentioned, Southwest boasts a strong balance sheet. But we can’t hide from the fact that sales for 2020 will likely see a big drop from 2019. Right now, estimates are for the company to pull in around $11 billion in revenue, a drastic change from the $22.4 billion it made last year.

But the stock price already reflects this decline in sales as shares tumbled more than 55% from their February high to March low. In other words, the stock has already priced in this year’s revenue and earnings decline.

In the table below I’ve gone back to look at what the company traded for during previous major selloffs. And the current health crisis has put LUV in uncharted valuation territory in nearly every significant metric: 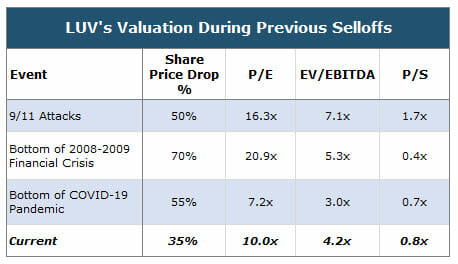 As you can see, even though LUV rallied off the March low, the company is still trading at some of the lowest valuations in company history.

After every major event, shares of Southwest quickly rebounded… 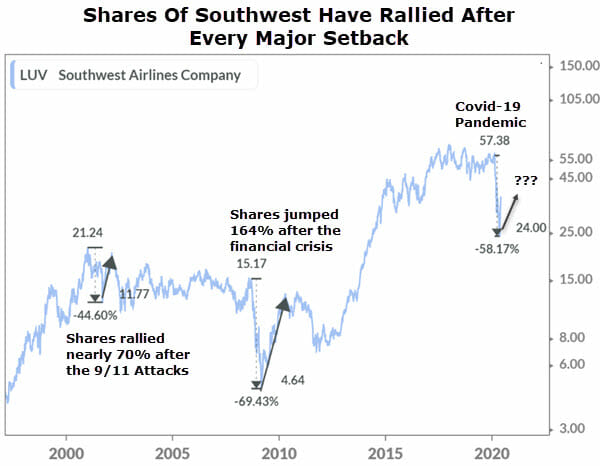 Right now, the company is doing everything it can to curb costs. It paused its quarterly dividend and share repurchase program and cut executive salaries. But I expect shares to rebound as the company navigates its way through this health crisis and returns to profitability in 2021.

Now, I’m going to be clear about the risks… If we see another major uptick in Covid-19 cases, that could once again keep people in their homes and away from the airport. This would further deteriorate sales (and likely share price) for Southwest.

But Southwest has a strong balance sheet. It consistently ranks as America’s favorite airline. It’s mostly a domestic carrier. And we’re slowly seeing air travel pick back up… These are all tailwinds for the company. It’s the best in the industry and it’s trading for cheap.

I’ve said it before, and I’ll say it again… When you see an opportunity to scoop up a great company at a great price, you take it. That’s why I recently added LUV to the Top Stock Advisor portfolio. I can’t promise this thing will rebound as quickly as it has in the past, but I like our chances over the long run.

In the meantime, if you’d like to learn more about Top Stock Advisor and see our latest research, check out this special report.