Why The ‘Robinhood’ Effect Is A Little Troubling…

This market is absolutely nuts…

Amid the 5% decline in first-quarter GDP, an unemployment rate over 13%, businesses shut down for months (with many more going belly up), a health pandemic, and protests all over the country, the tech-heavy Nasdaq Index closed at all-time highs earlier this month.

Prior to some recent volatility, the S&P 500 had climbed more than 40% since its March lows, and the Dow Jones Industrial Average is within striking distance of its all-time highs set in February.

But it’s not exactly the quick recovery that these major indexes have accomplished that has me perplexed. It’s what’s going on with many individual stocks. More specifically, companies that have filed for bankruptcy…

Many companies threw in the towel shortly after the Covid-19 pandemic essentially shut down our economy. Some of the more notable names that have filed for bankruptcy include J.C. Penney, Neiman Marcus, J. Crew, Gold’s Gym, Whiting Petroleum, and Hertz.

A handful of these companies that are publicly traded saw their shares skyrocket after they announced their bankruptcy.

Take Hertz Global (NYSE: HTZ) for example. The country’s second-largest auto rental company filed for Chapter 11 bankruptcy at the end of May.

The rental car industry is a tough business. It has high fixed costs. Hertz maintains a fleet of roughly 700,000 cars in the United States. Those vehicles are generally leased, and Hertz must make payments on them, regardless of whether they are rented or not. As travel ground to a halt from the pandemic, Hertz’s revenue stream dried up. In April, the company reported that sales were down 73%.

In March, Hertz laid off 12,000 workers and furloughed an additional 4,000. But that still wasn’t enough to stop the bleeding. You can cut as many costs as you want, but if you have no sales, you can’t survive.

Shares of Hertz traded for around $20 back in February. By the third week in May, shares were down to $3 a share. After it announced bankruptcy, shares fell as low as 40 cents. 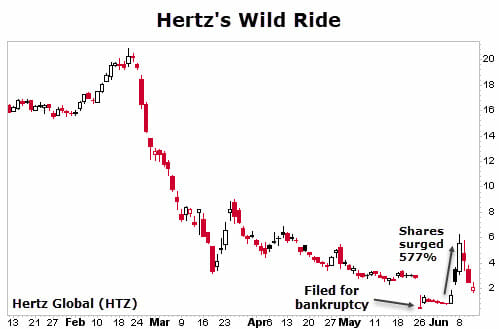 But here’s the bizarre thing about Hertz’s bankruptcy. As its problems mounted, investor interest in the car rental company grew on the millennial-oriented trading app Robinhood. 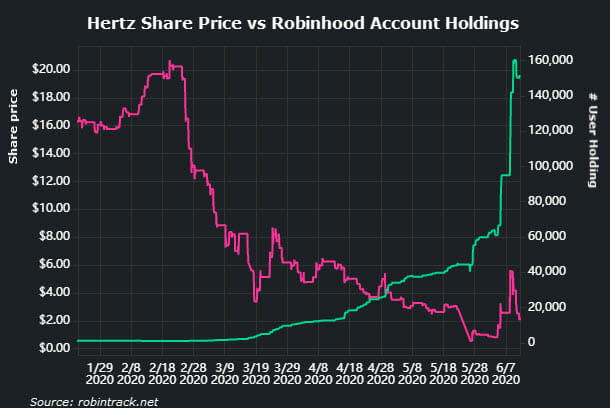 As shares of Hertz tumbled, interest in the company on Robinhood grew. When the stock was trading for around $20 a share in February only 1,300 accounts held Hertz. By the time it filed for bankruptcy 45,000 accounts held shares.

That right there, to me, sums up the craziness of this market. Traders are buying up shares of a bankrupt company, unaware that the stock is almost certain to go to zero.

Hertz isn’t a one-off example either. More than 55,000 accounts at Robinhood hold shares of bankrupt oil and gas exploration company, Whiting Petroleum (NYSE: WLL). And Chesapeake Energy (NYSE: CHK), which many believe will be filing for bankruptcy any day now, had its shares halted because of the volatility. Shares went from around $13 a share on June 3 to a high of $77.50 a share on June 8, as speculators awaiting its bankruptcy filing rushed towards the company. More than 216,000 Robinhood accounts hold shares of Chesapeake Energy.

This “bankruptcy bubble” surely won’t end well for many of these traders. But it gives you an idea of the sort of craziness that we’re seeing in today’s market.

Keep This In The Back Of Your Mind

It’s hard to complain about the stock market’s resurgence. Many of us have benefited greatly from it, myself included. But understand that these are unusual times. This isn’t normal. Don’t set your expectations to always see these sorts of exceptional returns this quickly.

Remember, the historical average return (including dividends) for the S&P 500 is just under 10% per year since 1927.

But as the common saying goes, we will continue to make hay while the sun is shining. However, keep this market euphoria in the back of your mind when things turn south. It will be easy to get caught up the seemingly “normal” routine of near-daily stock advances.

When one of our holdings begins to slip it will be tough to follow our sell signals and cut the stock from our portfolio. The only thing we will focus on is how much money we had when the stock was trading at its very peak. The temptation will be to tell ourselves that we will just wait for it to get back to that level and we’ll book our profits.

What usually happens, however, is that the stock continues to sink, and we watch our profits vanish.

We aren’t going to sell every stock at its absolute peak. But as long as we follow our rules, we should make great money in the market. More importantly, we won’t lose all our money.

I’d venture to guess that many of these new “traders” will lose all their winnings and more. Most of them don’t have a plan in place when things get rough. They won’t sell when they should. They will hope things get a little better and sell when the stock goes back up to the high-water mark.

I have a feeling that today’s new traders will be similar to those that made — and subsequently lost — fortunes in the stock market during the “dot-com” bubble at the turn of the century. All that will be left are the tales they tell about the time they were up hundreds of percent on some bankrupt car rental company.

Don’t let that be you.

P.S. There’s a safer way to turn tiny price moves into massive gains. My colleague Amber Hestla can show you how…

Amber has released a brand-new presentation that you don’t want to miss. Using a simple but powerful tactic, Amber and her readers have been making regular double-digit (and sometimes triple-digit) gains in a matter of days — and often from just tiny moves in the stock price.

And her team is making a bold promise: Over the next 12 months, if the gains from all of Amber’s winning trades don’t add up to at least 1,000%… Just let us know, and we’ll give you a second year of her service… absolutely free. Click here for more details.