As The Market Gets Choppy, Keep This In Mind…

I ask myself that question almost every morning. It could be Federal Reserve commentary one day, payroll data the next. But investors and traders are always tuned to something.

As I write, the market appears to be unnerved by reports that new Covid-19 cases are spiking in several states (namely Arizona, Florida, and Texas). While “spooked” may be too strong of a term at this point, investors are at least hesitant to put new money to work. If we start to see more indications of a second wave, expect to see a good chunk of June’s gains vanish.

Fortunately, sentiment has been buoyed by upbeat economic news.

The Good News (For The Market & Us)

While March and April were grim for retailers, May brought some much-needed relief. Retail sales jumped 17.7% for the month, double the 8% increase analysts were expecting. Granted, the bar was set low, but spending still showed the sharpest increase ever recorded — topping the prior record set in October 2001. 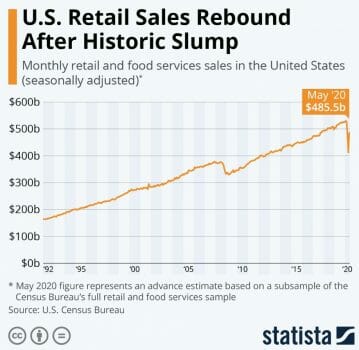 And we’re not just talking about groceries and other basic essentials, but big-ticket discretionary goods like RVs. Consumers are even pulling the trigger on new houses. Mortgage applications have risen for nine straight weeks and just hit the highest level in 11 years.

Rock-bottom 30-year borrowing rates of 3.3% (the lowest on record) deserve some of the credit. Still, the surge in home buying speaks volumes about consumer confidence.

Traders have also been emboldened by newly-announced infrastructure spending proposals out of the White House. While details are still being worked out, President Trump is reportedly urging the Department of Transportation to develop a sweeping infrastructure game plan.

The current round of funding is set to expire in September, and it could be replaced by a much broader $1 trillion package aimed at everything from roads and bridges to rural broadband internet connectivity.

So if traders are reluctant to buy, they aren’t really in a selling mood either. While the market is impossible to predict in the short-term, we could be in for some sideways trading over the next week or so (which would be just fine with me).

But sideways doesn’t necessarily mean quiet. There could be some vigorous back-and-forth exchanges between the bulls and bears – which always presents opportunities for nimble investors.

Case in point, I just recently closed out a winning trade on Roku (NYSE: ROKU) – the streaming hardware maker.

If you have a so-called “smart” TV, then you probably already know the ROKU name. You may even be a regular user. Between its own streaming devices and partnerships with numerous manufacturers, ROKU accounts for nearly 50% of the nation’s internet-connected television watchers.

With more and more households cutting the cable (or satellite) cord, this is a rapidly growing pie. Average revenues per user (ARPU) have climbed nearly 30% to reach $24.35 over the past 12 months. Some of that comes from device hardware sales, which rose 22% last quarter. But the bigger growth driver is the ROKU platform, whose revenues surged 73%.

We are in the early stages of a major shift in ad budgets. Yet, of the $77 billion spent each year on television ads, only $7 billion is directed to smart TVs — the other 90% goes to traditional linear broadcast televisions.

That’s starting to change in a big way, and not just because of the expanding number of internet-connected televisions being bought. Streaming ads are more targeted, effective, and measurable. Even a modest increase to 15% of the ad market would see a $4 billion spending shift. ROKU could be a major beneficiary of this trend.

ROKU’s key metrics soared when most of the nation was stuck in confinement. I don’t think that will change when consumers start venturing out. The lockdown only strengthened a sustained shift in consumer behavior that has been ongoing for more than a decade.

At some point, I think ROKU will make an enticing target for a larger media brand (or perhaps a big-tech name). But with this kind of momentum behind it, you don’t have to wait for that possibility to profit (it’s just icing on the cake).

That’s why my Takeover Trader subscribers and I entered a bullish trade on ROKU using call options. Specifically, I entered the August $115 call on ROKU at $8.65. When we sold half our position, it was trading for more than $23.

All told, we made a nice gain of 171% at the midpoint in just nine trading days.

The point is, there’s plenty of opportunities out there. You just have to do the legwork to find them.

To find those opportunities, I suggest turning to my colleague Jim Fink…

Jim is a renowned trader who’s developed a proprietary trading method that consistently beats Wall Street at its own game. It works in up markets, down markets, and sideways markets alike. Even better, his scientific system delivers these profitable trades in 60 days or less.

Jim Fink always follows through for his readers. So if you want to learn about Jim’s next trades, click here now for details.