Get Ready To Profit From The Edge Computing Revolution

A few months ago, a neurosurgeon in Hainan, China performed a robot-assisted procedure on a patient in Beijing more than 1,000 miles away. It was a remarkable achievement.

And as impressive as brain surgery is on its own, what’s important to understand is that this would never have been possible in the 4G era. There might have been a second or two delay, potentially the difference between a precise incision and an accidental lobotomy. But with 5G, the transfer of video data was nearly instantaneous.

If you understand nothing else about how telecom networks operate – or the difference between 4G and 5G – this example pretty much sums it up.

But rather than focus on 5G, today I want to talk about a related technology that you’re going to be hearing about more in months and years ahead. Because it’s going to have a critical hand in making all sorts of hyper-fast applications like that remote brain surgery story possible, including more mundane things that are more applicable to business and daily life.

You see, with new internet-connected devices turned on every second, the bandwidth roadways are getting increasingly crowded.

Imagine if there was only one large gas station for a densely populated metropolitan area. You can bet the lines would be pretty long, not to mention the driving time to get there and back. Now picture dozens of smaller satellite gas stations popping up around town, shortening travel times, and alleviating congestion.

That’s edge computing in a nutshell.

Once relegated to trade journals for IT pros, the topic is starting to become mainstream. And for good reason. In the near future, this amazing technology might impact your daily life five times before breakfast… from making a mobile bank deposit to checking the local weather.

As investors, it’s important to understand this technology now – because by the time edge computing becomes common knowledge, it’ll be too late. 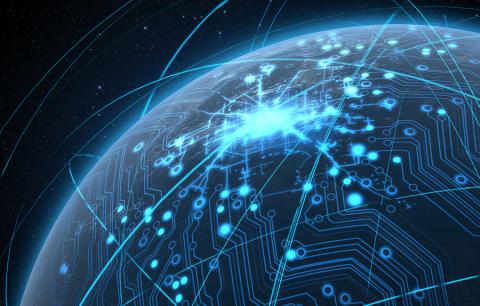 Right now, most of the data zipping between servers and users are still stored and processed at a centralized depository. Picture a hiker in South Dakota looking for a trail map on a national park website. They might be connected to a data center physically located somewhere in downtown Seattle. Even if the data is transmitted at near light-speed, it will still take some measurable time for that packet of information to travel across three states.

In technical jargon, that lag time is referred to as latency. It might only be a few milliseconds. But think of an autonomous self-driving car approaching a busy intersection. Shortening that delay will enable the computer to react more quickly to real-world conditions, potentially avoiding a dangerous collision.

That’s where edge computing comes in. In the simplest terms, edge computing decentralizes the exchange of data, moving storage capacity and processing power closer to where it’s actually being used. The nearer the proximity, the faster the turnaround time.

A few milliseconds might not matter much if you’re hiking – or watching a video on YouTube. But for other applications, speed is critical.

Instead of communicating with a data center halfway across the country and waiting for a reply, this next-gen technology allows for localized processing at a nearby gateway, or possibly within the device itself. Not only is it faster and more efficient, but considerably less expensive as well.

Edge computing is most critical in real-time applications where seconds count. We’ve already mentioned self-driving cars and robot-assisted surgeries. Artificial intelligence and virtual reality are also frequently cited. But there are countless other applications… from biometric facial recognition screens at airports to temperature and pressure sensors at the bottom of offshore oil wells.

This transformation is being expedited (some would say necessitated) by the internet of things (IoT) revolution. The number of internet-connected devices is expanding exponentially… not just phones and tablets, but vehicles, fitness trackers, smart TVs, even your kitchen refrigerator.

The Next Big Thing

From simple household gadgets to complex military hardware, experts estimate there are now 31 billion internet-connected devices installed. That number is expected to more than double to 75 billion by 2025… All of them producing data that must be captured, processed, analyzed, and stored somewhere.

In some respects, edge computing will supplant cloud computing. As you might expect, telecoms and other companies are investing aggressively to meet this wave. According to a report from Grandview Research, the global edge computing market is forecast to grow 37% annually, reaching $43 billion by 2027.

All of which brings us to my latest recommendation over at High-Yield Investing. It’s not an edge infrastructure play – at least not directly. Rather, the explosive growth in data traffic and demand for mass-capacity storage volume is a springboard that could take this current market leader to a whole new level.

Unfortunately, I can’t reveal the name of this pick to you today out of fairness to my premium subscribers. But just know that this is an idea you’re going to hear about a lot more very soon. And it would be worth your while to start researching ways you can profit now – before it’s too late.

In the meantime, go here to learn more about High-Yield Investing.