Most people would agree that 2020 is a mess… we have a health pandemic killing people — around 150,000 people in the United States so far. We also have riots and protests that have escalated into destroying and burning buildings and vehicles.

The deaths and damage have caused most investors to shun the insurance industry. After all, insurance companies are forking over claims left and right in the wake of the damage, deaths, concert and event cancellations, along with anything and everything else that can be insured and is being affected by this pandemic.

Longtime readers know that I’m a huge fan of insurance companies, specifically property and casualty (P&C) insurers. I talked about the insurance industry in my February 2017 issue — and how a guy named Shelby Davis took $50,000 and turned it into $900 million over his investment career by investing mainly in a handful of insurance stocks.

And just about everyone knows that insurance companies form the foundation of Warren Buffett’s Berkshire Hathaway’s (BRK.A) portfolio.

But what you may not know is that when these fantastic businesses go on sale, it’s usually a good idea to scoop them up. If you do, then you should comfortably see your wealth grow year after year.

And that’s exactly what is setting up right now…

Insurance Is Out Of Favor

While the major indexes and most sectors have recovered nicely from the initial coronavirus fallout in March, the insurance industry is still more than 20% off its February highs. 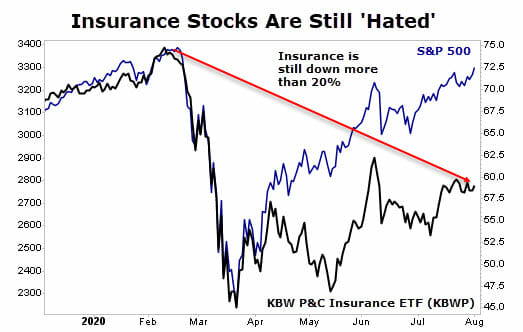 There’s a lot of uncertainty surrounding the industry as investors try to figure out how much pain will be inflicted on these companies as they dish out claims for lost lives and damaged property.

It makes sense, too. Insurance companies are betting that these sorts of events won’t happen, and nobody could have guessed that a virus would suddenly wreak havoc on our lives and the economy. The insurance companies have clearly lost the bet, and now they’re paying up.

The Case For Insurance Stocks

When you go to a cocktail party, I’m sure insurance stocks aren’t the “hot” topic that everyone is talking about. It’s not a “sexy” investment. It’s a stodgy industry with no new game-changing innovations.

For better or worse, insurance has become a regular cost of living. Like rent or electricity. You have to have it. So you pay the bill. And to top it off, because an insurance company needs to turn a profit, you essentially need to have wasted your money.

When it comes to talking about insurance, it’s understood that nobody likes it. And if you don’t like it, chances are it’s not at the top of your investment wish-list.

But I’m here to tell you that insurance is exactly where you should be invested. If the world’s greatest investors have built their fortunes on the backs of insurance companies, then it should be a staple for every portfolio.

In Warren Buffett’s 2011 Berkshire Hathaway shareholder letter, he provides a quick snapshot of why he loves the insurance business model:

Insurers receive premiums upfront and pay claims later. In extreme cases, such as those arising from certain workers’ compensation accidents, payments can stretch over decades. This collect-now, pay-later model leaves us holding large sums – money we call “float” – that will eventually go to others. Meanwhile, we get to invest this float for Berkshire’s benefit… If our premiums exceed the total of our expenses and eventual losses, we register an underwriting profit that adds to the investment income our float produces. When such a profit occurs, we enjoy the use of free money – and, better yet, get paid for holding it.

In short, while most companies have to pay for capital, insurance companies receive free capital that they can then invest and keep all investment profits.

Why Now Is A Great Time To Buy Insurance Companies

On the surface, it’s easy to see why insurance companies aren’t in favor right now. But history shows that the best time to invest in these companies is in the midst of disaster…

Sure, some poorly run insurers will go out of business. But the elimination of competition is great for the companies that do survive, as now they can charge higher rates in the period that follows the disaster. Plus, customers — with the tragedy fresh in their minds — are willing to fork over extra money for the peace of mind that comes with knowing their risks are insured. We will likely see a surge in “pandemic business insurance” or a bump in business interruption insurance.

I’ll spare you the history lesson for now. But everything from fires (like the Great Chicago Fire in 1871) to earthquakes (San Francisco, 1907) to outbreaks (the Spanish Flu) to terrorist attacks (9/11) and Hurricanes (Katrina, Harvey, Sandy, etc.) produced eye-popping numbers in terms of damages.

The point is, insurance companies have faced many catastrophes over the years. The good ones not only survived but even thrived afterward, outperforming the broader market. 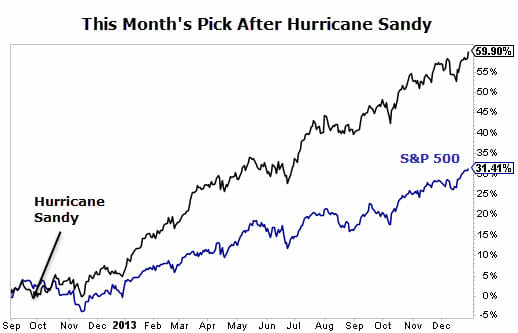 How To Find A Good Insurance Stock

To fully grasp why I believe P&C underwriters are some of the world’s best businesses, there’s a couple of things we need to cover…

One of the keys to a good insurance company is its ability to generate an underwriting profit. These are the companies that aren’t afraid to turn business away if the risks outweigh the potential profit. Some insurance companies will insure anything just to keep premiums coming in the door. We don’t want to invest in those.

Next, like many financial institutions, a key metric for insurance companies is the firm’s book value. This is the amount the company is worth if it was liquidated. The book value is often compared to the stock’s current market price or P/BV.

Of course, you can’t just go buy any insurance company. You have to find the best. I’m talking about the ones that consistently generate underwriting profits, grow float, and book value growth.

That’s exactly what we have with my latest pick over at Top Stock Advisor.

Unfortunately, I can’t reveal the name of that pick with you today. But using the simple metrics I described above, you should have no trouble in finding a solid P&C insurer that’s on sale right now. If you do the homework and find one now, you’ll thank me later.

There’s another stock I found right now that’s going unnoticed by the market. And it could make investors a lot of money in the coming months…

I regularly read through SEC filings, and I recently found something in a tiny footnote of one report that leaped off the page. What I can tell you is that it has to do with a little-known satellite technology company that may have scored the deal of the decade.

I’ve got all the details in my latest report right here.