How To Get Maximum Upside From Gold Miners…

Forget what you’ve seen in the movies. Gold mining isn’t all it’s cracked up to be. You don’t exactly walk out into the mountains with a shovel and come waltzing back into town a few days later carrying a hefty bag of nuggets.

There are test holes to drill, core samples to analyze, and geological surveys to complete. If the economics of the project appear feasible, the owners must then jump through all kinds of regulatory hoops. There are detailed environmental impact and risk assessment studies to present. There are also stacks of permits that can take years to get approved, even when they’re not interrupted by protests and injunctions. 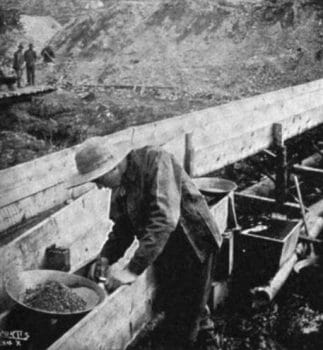 And that’s just to get the initial green light. Don’t forget about hefty royalties and taxes (sometimes bordering on extortion) that must be negotiated with local governments.

From there, heavy expenditures must be made on power-generating infrastructure and other needs. Then comes the really fun part of excavating tons of rock and separating the gold in nearby mills and processing plants. That means subjecting the material to cyanide leaching or calcium thiosulfate reagents or some other chemical process, depending on the metallurgical character of the ore.

From start to finish, it can take 12 years to bring a new discovery online and get that first ounce to market.

Or, you can just go with plan ‘B’ – invest in a go-getter that has already finished all the legwork.

The Beautiful Math Of Mining…

That’s what makes one of my recent Project Rainmaker picks such a prime candidate. In a frozen region of Northern Canada near the rim of the Arctic Circle, this company is approaching the development finish line on a massive gold deposit.

How massive? Well, according to geologists, this district contains approximately 7 million measured and indicated (M&I) ounces of gold.

The project is expected to deliver 200,000 – 300,000 ounces annually for well over a decade. And we’re talking high-grade – about 6 grams of gold per ton of ore, versus a global average of 1.2. That’s five times as much gold per ton, which means lower extraction costs and wider profit margins, even if gold prices get cut in half.

Cash extraction costs are expected to run just $534 per ounce, among the leanest in the industry. That’s a net profit of more than $1,400 per ounce at current prices, multiplied by expected production of at least 200,000 ounces per year.

I’ll let you do the math.

Engineering and logistics work are largely complete. The project has also secured all major operating licenses and environmental permits. After 11 years of toil, this mine is now finally considered to be “shovel-ready.”

But wait, there’s a bonus.

Years ago, the company sold a nearby property that happens to be one of the world’s largest undeveloped silver veins. The company pocketed $50 million in upfront cash from the sale. But it also retained a royalty interest guaranteeing a fixed cut of any future production. Once the site opens, it will receive (at no cost) 22.5% of all silver production up to the first 190 million ounces, and 12.5% thereafter.

Understand that senior producers like Newmont (NYSE: NEM) and Barrick Gold (NYSE: GOLD) are desperate for new sources that will boost production and replenish their reserve bases. Many tired fields from Nevada to South Africa are nearing the end of their projected lifespans and aren’t easily replaced.

You see, the low-hanging fruit has already been picked. Large-scale deposits (30+ million ounces) that can really move the needle have become increasingly scarce. There were at least ten such discoveries per decade in the 1970s, 1980s, and 1990s, but none in the past 20 years.

A few decades ago, every ounce of gold dug up was replaced by two ounces of newly-discovered underground gold. Today, every ounce of production is only replaced by half an ounce. In other words, reserves are dwindling, having fallen in each of the past seven years.

That means this relatively-unknown mining company could be the belle of the ball. This junior miner is well-funded and holds the keys to one of the world’s largest and richest, de-risked gold projects. The more the company drills and explores adjacent terrain, the more gold it continues to find – there could easily be 10 million ounces just waiting to be plucked from the ground.

The stock has doubled since March, but this undervalued business is still bargain-priced. And while I can’t share the name of the pick with you today, here’s what you should take away from all of this…

With gold prices at record highs and spending on the rise, I think it’s only a matter of time before the quality junior miners gain even more steam.

Spurred in part by the economic storm that washed ashore with the coronavirus, investors and speculators have driven gold to a fresh seven-year high. And with central banks printing money to stimulate activity (devaluing their currencies in the process), some savvy experts think it’s only a matter of time before we see another major rally.

I’m not here today to make a long, drawn-out bullish case for gold. Actually, I favor metals with more utility and purpose, such as cobalt, lithium, and palladium. Still, it can be smart to have a small portion (say 3% to 5%) of your net worth denominated in precious metals, as an inflation hedge if nothing else.

And junior miners (like the pick identified by my Project Rainmaker system) are were you want to look for maximum upside.

We’ll be discussing the mining sector in greater detail in the months to come.

For now, I encourage you learn more about Project Rainmaker right here.