After Tech’s Amazing Run, What Now?

If you’ve invested in any tech stock, you’ve likely done quite well over the last few months.

To put things into perspective, this time last year Apple (Nasdaq: AAPL) had a market capitalization of around $900 billion. This was before we had even heard about the coronavirus.

It hasn’t released any new major products. Only just yesterday, the company announced upgraded, refreshed versions of products in existence already. It also announced some new services that will contribute, but that doesn’t explain the run-up to this point. And we won’t get a new iPhone announcement until later this year, either.

Yet, its valuation more than doubled. 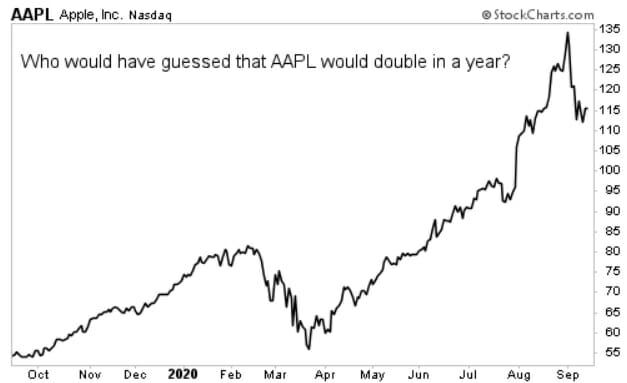 A Market Disconnected From Reality?

If you look at nearly any valuation metric of Apple, it’s trading for more than double its historical five-year average. And it’s not like Apple is growing like a weed. Over the last five years its grown sales at a compound average growth rate of just 7.2%. For fiscal year 2019, sales actually declined by 2.2%. And while in its most recent quarter topline growth was 10.6%, that was its best quarter in roughly two years.

Don’t get me wrong, I’m not picking on Apple to say it’s a terrible investment. It’s a wonderful company that generates enormous amounts of free cash flow and dominates its market.

I’m simply using it as an example to show the disconnect in the market right now. Apple, along with a plethora of other companies (mostly in tech) are surging to record highs.

Valuations are being stretched. And after taking a breather, it seems like these stocks are all set to continue surging higher.

It’s been downright confusing for many investors, especially value investors. But hey, if you own some of these tech-focused stocks, you’re not complaining.

But before you drink that that cup of Kool-Aid in your hand, take a step back.

Evaluate your portfolio. Are you heavily allocated in one sector? Have some of your holdings grown to become over-weighted in your portfolio (i.e. you allocated 4% of your portfolio, and now that the stock has soared it accounts for a higher percentage). Are the financials of your stocks supporting their valuations?

These are some good questions to ask yourself.

Now, I’m not saying you need to abandon this sector altogether. Far from it, in fact. I’m simply pointing out that you need to try to remain objective when looking at your portfolio – especially when we’re in the middle of a remarkable run like this.

If you have some companies in your portfolio that haven’t seemed to budge, yet your investment thesis remains intact, remain patient. In the meantime, rather than running away from this sector, I’m focusing on under-the-radar opportunities in smaller names. This way, we stand a far better chance of finding a company that will post meaningful growth – rather than simply ride the wave of exuberance in the market.

Take Digital Turbine (Nasdaq: APPS) for example. Headquartered in Austin, TX, this company simplifies content discovery (think mobile apps and advertising) and delivers it directly to your electronic device. It does this by working directly with mobile operators (Verizon, AT&T, etc.) to push campaigns and highlight apps.

For instance, when you got your last phone and went through the setup process, you may have noticed subtle prompts for “cool” or “useful” apps. That was likely Digital Turbine’s platform promoting apps to increase downloads.

For example, a top audiobook app utilized Digital Turbine to help expand its user base around the globe. Digital Turbine launched an efficient app promotion campaign, targeting specific users who had adopted similar subscriptions or services or had established interests in similar apps.

Within a 30-day period, Digital Turbine increased this audiobook app’s user registration 20x over the previous month. The new users generated converted to trial registrations at a rate of 10x better than competing advertising techniques.

Its media distribution business has been on a tear recently. When it reported fiscal year 2020 results (its fiscal year runs from March to March), the company grew sales 34% over the prior year, pulling in more than $138.7 million in sales.

When it released fiscal first-quarter results (three months ended June 30) the results were even better. Revenue jumped 93.1% to over $59 million compared to the same period a year ago.

Despite being a relatively small growth company ($2 billion market cap), it is profitable. In its last fiscal year, it had a net income of $14.3 million, and in its most recent quarter, its bottom line was $9.9 million.

Digital Turbine has also been growing cash flow at an incredible clip. For fiscal year 2020, it generated $31.4 million in cash flow, a massive improvement over the $1.3 million it made the year before. And in its most recent quarter, it continued its cash flow growth streak, pulling in over $6 million, a 25% jump over the year-ago period.

The company has a good balance sheet with $18.7 million in cash on hand compared to $26.1 million in total debt, $23.3 million of which is long term debt.

So long as we don’t have another major selloff in tech stocks, I expect shares to quickly reach the $30 threshold, and then keep climbing.

Of course, this absolutely could happen. But as I’ve pointed out before, it’s often a waste of effort trying to figure when things like this might happen. You’re far better off practicing discipline as an individual investor. That means if another tech selloff does happen, you treat APPS just like you would any other holding: cut your losses quickly and move on.

P.S. Trading these three predictable stocks has beaten Wall Street’s top money managers for the past 8 years. One subscriber is making so much money, he told us, “I no longer need a job!” Click here to find out how you can do the same yourself.