Should You Buy This High-Yield Energy Stock?

Back in June, I wrote a piece detailing one of the ways we took advantage of the market chaos during the Covid-19 selloff in March.

For those who may not be aware, my High-Yield Investing subscribers and I decided to be bold in the face of uncertainty back in March. So we went shopping. We scooped up a number of high-quality dividend payers trading at ridiculous discounts. And those positions, for the most part, have payed off tremendously.

But one of our moves I addressed in that piece (in the energy patch) has been treading water.

I delved into some detail about that pick in my previous article. And because of that, I want to examine whether this is a case where we simply need to be patient – or if it’s simply not going to pan out… 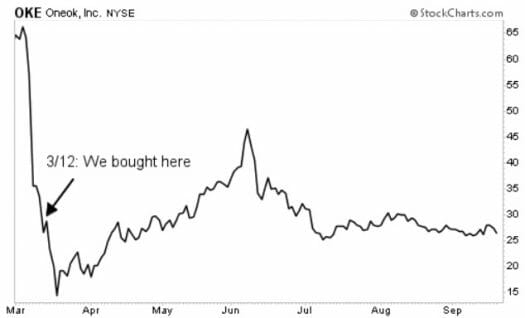 Most of the firm’s transportation capacity (and thus its fee-based cash flow stream) has been pre-reserved by various customers under fixed contracts. Still, it has felt the pinch of falling commodity prices, which in turn have prompted many producers to curtail their output.

Producers in this fertile oil field (the nation’s second-largest shale play) curbed their output by 500,000 barrels per day in May following tumbling prices at the onset of the pandemic. And just when they were beginning to come back online, a federal court dealt a legal blow to the Dakota Access Pipeline (a critical conduit that carries nearly half of all Bakken crude to refineries in the Midwest).

A federal court ordered a full shutdown of the pipeline pending further environmental studies. That decision was temporarily overruled by an appellate court, but the battle is still in legal limbo. There are few other direct transportation routes except railroad, which is far more costly.

Takeaway capacity is just another question mark for oil producers in the region. And since natural gas is commonly produced as a byproduct of oil, the slowdown has taken a bite out of Oneok’s business. The firm’s natural gas gathering and processing segment delivered $88 million in EBITDA last quarter, less than half what it pocketed a year ago.

Fortunately, the other two divisions are holding their own. And there was a margin of safety with regard to dividend coverage.

At this point last year, Oneok delivered $1.0 billion in distributable cash flow (DCF). That was enough to pay distributions with $335 million left to spare – for a coverage ratio of 147%.

That’s a comforting level, indicating the company has the strength to meet dividends even if earnings fall sharply. And indeed they have. Through the first half of 2020, DCF totaled $823 million, reducing the surplus to just $49 million and the coverage ratio to a much narrower 106%.

There was actually a shortfall in the second quarter.

If this is the new normal, then dividends will likely have to be re-set at a lower level. But I don’t think that’s the case. First, capital expenditures have been scaled back dramatically to preserve cash. Furthermore, the storm that hit last quarter already appears to be easing.

Nearly all of the damage (about $100 million in lost EBITDA) occured in the gathering/processing segment. Half of that ($53 million) resulted from production curbs in the Williston Basin. The other half came from lower commodity prices. While Oneok is mostly fee-based, some contracts do have a percent of proceeds (POP) component.

Both issues are on the mend.

Management reports that pipeline volumes have increased “sharply” since the end of last quarter. And that’s due in large part to rebounding natural gas prices, which surged nearly 50% in August – the steepest monthly gain in more than a decade.

Prices have jumped nearly 80% since June, thanks largely to sweltering summer temps (natural gas is the nation’s primary electricity-generating fuel) and thinning inventories.

The rebound in volumes across the firm’s network is reassuring, as is the fact that Oneok has $945 million in cash and an undrawn $2.5 billion line of credit.

The company could pare back distributions by 25% and still offer a rich double-digit yield. For now, OKE sports a rich yield of 13.5%. And don’t forget, Oneok is structured as an ordinary corporation rather than a partnership. That means it issues a simplified 1099 tax statement instead of the dreaded K1.

To put it simply, I think OKE remains a “Buy”. It isn’t out of the woods just yet, though.

P.S. In my most recent research report, I discussed why I think it’s time for investors to sell Apple.

I know it sounds crazy. But if you check out my latest research, you’ll start to understand why.

It all boils down to this… The Covid-19 crisis will lead to a fundamental shift in the way companies think about liquidity – and how they return cash to shareholders. And there are much better choices out there for investors who are looking for higher yields.

If you’d like to check out my brand-new report, go here now.