This Kind Of Disconnect Is Happening Across The Market…

It’s become a somewhat familiar story for me. But I bet a lot of individual investors are missing out on it completely. Bear with me a second, and you’ll see where I’m going with this…

Before Covid hit, I was looking at a stock. It was trading in the $20 range.

In the months that followed, it became clear that Covid-19 was a full-blown pandemic. Businesses shut their doors, shoppers began raiding grocery store shelves, restaurants shuttered, and we were all told to stay at home.

Fast-forward a bit, and things had begun to loosen up. By early July, the shares had ascended to a peak above $26. But that summer enthusiasm has waned in the fall, and the stock has since drifted back where it started.

Now, if that were all you knew about the stock, you’d probably think to yourself “makes sense.” And it would make sense if sales and earnings for the company in question showed a similar tapering off.

The Booming Business The Market Ignored

Surprisingly, the stock in question is the this upscale grocer Sprouts Farmers Market (NYSE: SFM). 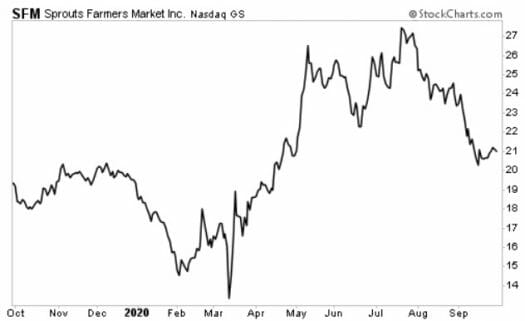 You don’t have to know the details of the financials to make an educated guess as to why there’s a disconnect here. After all, grocery stores were one of the only businesses that were booming during the lockdown craze.

Spurred by a healthy 9% bump in comparable same-store sales and the addition of 20 new locations, Sprout took in $1.6 billion in revenues last quarter, an increase of $200 million (16%) from the same period last year. We won’t know third-quarter results for a couple of months. But management did reveal that comparable-store sales growth continues to track ahead at a similar 9% pace, well above the industry average.

On the downside, Covid related expenses took a $47 million bite out of earnings. Still, the company managed to post a 32% increase in gross profits on the back of margin expansion. And it has generated operating cash flow of $393 million year-to-date, a powerful increase of more than 50%.

Sprouts continues to expand its footprint and now has 350 locations spread across 23 states. These stores are rather compact (about 30,000 square feet) compared to your average Wal-Mart, but it’s hard to argue with the results – the company has posted positive comparable sales growth for 52 consecutive quarters.

Looking forward, there are two big trends underway in the grocery business. The first is a growing consumer preference for natural and organic foods. The other involves the proliferation of private label brands on supermarket shelves.

Sprouts is right in the middle of both.

In any given week, Sprouts welcomes about 3.4 million shoppers. And its home delivery services have exploded, rising 150% over the past 12 months.

With growing sales volume, Sprouts has been able to coax supply chain efficiencies from farmers and food distributors. Those cost savings are generally passed along to customers.

Meanwhile, Sprouts has also developed its own private label merchandise that isn’t found anywhere else. This line now encompasses 3,000 individual products and accounts for 15% of the firm’s overall sales.

Sprouts is at the intersection of some powerful trends. The natural and organic segment is the fastest-growing niche in this $700 billion grocery industry. Supermarkets used to command 75% of the market, but that share has slid to near 60% — stolen by specialty retailers like this one.

Yet, the shares are sitting in the same spot now that they did 12 months ago. I don’t think this disconnect will last.

SFM is an attractive candidate for an opportunistic investor right now. But the truth is, there are a lot of other examples out there just like this…

That’s why I recently told my followers why I think it’s time for investors to sell Apple. That’s right. I know it sounds crazy. But the truth is, if you’re looking to earn more, there are much better choices out there.

This could be one of the most controversial calls of my career… But I’m willing to make it, because I think the opportunity is worth it.

Check out my latest research for more details…