A No-Brainer Way To Profit From Higher Taxes…

In my previous two articles, I spent some time discussing the very real possibility of a tax hike in the not-too-distant future.

As if there wasn’t already enough going on in the world… But rather than bury our heads in the sand, I’ve been focusing on concrete steps investors can take to protect themselves.

For example, in the first article, I explained the basics of municipal bonds – and how their (usually) tax-free income can help shelter your cash from the tax man. (In the second article, I went into even more detail on muni-bonds.)

I realize muni bonds aren’t exactly thrilling material, but it was worth doing. But today, let’s talk about a more direct play on the tax hike theme… one that will likely be a winner no matter which way the election turns out.

If You Can’t Beat The Tax Man, Join Him…

H&R Block is the dominant No. 1 leader in this $20 billion industry, with a 15% share of the market. And when the biggest player has only 15% of the pie, it’s a good bet that it will gobble up more in the years to come. In fact, HRB has gained market share the past three years running, thanks in part to its new virtual tax filing assistance.

In the meantime, shares of HBR were knocked down by Covid along with the rest of the market.

But unlike many stocks, it still has yet to recover its previous highs. This is despite the fact that it just posted a whopping 300% surge in quarterly revenues to $600 million, quadruple the $150 million collected a year ago. Adjusted earnings for the period swung to a $0.55 per share profit from a $0.66 per share loss last year.

Don’t get too excited. The quarter ending July 31 is usually a seasonally slow period. But with Uncle Sam delaying federal income tax filing from April 15 to July 15 this year, income that would normally have been booked in the April quarter was postponed to the July quarter.

Still, from beginning to end, it was a successful season. Between full-service tax preparation and easy-to-use software for the do-it-yourself crowd, H&R Block assisted 3.3% more clients with their returns in 2020 than in 2019.

I emphasize “more” because the improved operating results are a direct contradiction with the stock chart. 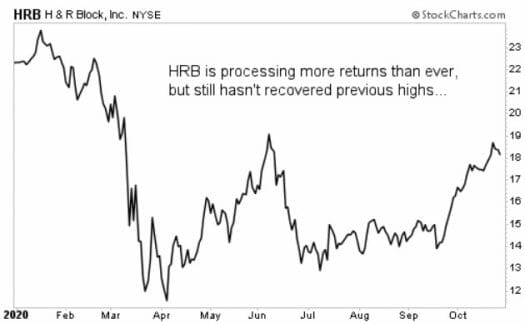 I’ve mentioned previously that investors shouldn’t be fooled by the major market averages. There are still plenty of good deals out there. HRB is one of them. Since Covid erupted in February, HRB has lost nearly one-fourth of its market cap, even though the company is processing more returns than ever.

Let’s be clear about what that means… This reliable business hasn’t missed a dividend payment in over half a century. That’s one reason why I’m confident this pricing disconnect will eventually narrow.

In the meantime, that 5.6% yield looks pretty enticing.

It has been a tough year, but HRB stock has been trending higher lately. That rally may reflect Joe Biden’s lead in the polls, as the Democratic nominee has promised to raise corporate, personal, and capital gains taxes. Such changes to the tax code often spur an increase in the number of filers seeking pro guidance.

In any case, I think this beaten-down high-yielder remains an attractive candidate for income and value-minded investors at this level.

If you’re like most traders or investors, then you’re probably a little nervous about the upcoming election. But our colleague Jim Fink says he’s found the closest thing to a “sure thing”. In fact, he says this trade is completely “election-proof” — allowing you to come ahead no matter who wins on November 3rd.