Forget Elections, Focus On This Instead…

Today will be when the American people decide the fate of the nation and choose our next President.

Or not. After all, as some reports suggest, counting all those mail-in ballots could take a while.

It’s understandable if you’re feeling a little anxious. But I want to remind you of something I’ve said before recently when it comes to mixing politics with investing…

In short, don’t. I know that may not be totally achievable, but you need to at least try. As I said in this piece, successful investing is a psychological war – much more than most people realize. Clouding that with politics just makes it even more difficult to win that war.

Instead, there’s a much healthier mindset you can adopt when it comes to your portfolio and the election. I talked about it in this piece:

In other words, it will be business as usual for many companies in the market.

So no matter what happens, keep that in mind.

Some trends are so big, so powerful, that it simply doesn’t matter who’s in charge in the White House.

For example, back in February — at the onset of the coronavirus pandemic — I joked with my colleague that video game stocks should do well as shelter in place orders began filtering through and folks were stuck at home.

Of course, this was just a hunch. It was still early in the health pandemic and we didn’t exactly know how Covid-19 would affect our lives (and our economy). But I’d been quietly watching the gaming industry and thought it showed a ton of promise that most folks were overlooking.

I even recommended a gaming stock to readers of my Top Stock Advisor advisory at the end of January. Of course, less than a month later as the market began its rapid descent, I was second-guessing my decision to invest in the sector.

After all, if we were entering a recession. Discretionary items like video games, consoles, and any peripheral gaming accessories were likely the first things people would cut from their budgets.

But I told readers of Top Stock Advisor — which is a newsletter with a longer investment horizon — to hold firm. I stuck with my hunch that folks who were relegated to their homes would likely fill their time with gaming.

In short, the pandemic created massive tailwinds for the gaming industry. You had the largest generation — Millennials — in the midst of their careers, ordered to work from home. It also happens to be that Millennials are the biggest demographic for gaming companies, as they grew up on the various consoles.

So, the gaming industry had Millennials stuck at home, with their jobs still largely intact. Throw in an extra $1,200 stimulus check, and they filled their extra time buying — and playing — video games.

I’ve talked extensively about the gaming industry and how large it is, here, here, and here. As a refresher, it’s two times larger the Hollywood. And it’s expected to become a $200 billion market by 2022.

Meanwhile, over at Maximum Profit, I recently recommended a trade in Sea Limited (NYSE: SE) – a relatively unknown gaming company that also operates an e-commerce platform. So, we’ve certainly enjoyed the massive surge in the gaming sector through our trade: 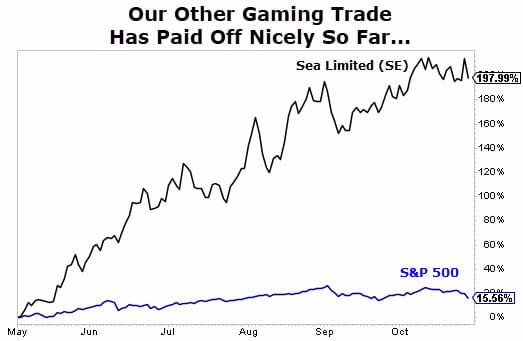 Shares of Sea Limited are obliterating the broader market’s return over the last six months.

(Side note: if you’re one of the many folks who are up big on this trade, please drop me a line. I’d love to hear from you.)

And while most folks might see this chart and feel like they’ve missed the boat with this stock and the gaming sector at large, I don’t think that’s the case. As successful traders know, you should love buying stocks when they’re reaching new highs… as that typically means it will continue to reach new highs.

I’m a big believer in this trend. And that’s why, last week, we went back to the well with another trade in a company that’s benefitted from the gaming boom (as well as the work-from-home trend). It provides gamers — as well as those setting up their home office — with all the peripherals they need to game, or work.

My system has also flagged another company that isn’t in the gaming space but is in another industry that’s seeing dramatic growth. One we’ve profited from many times: “the cloud.”

Let me ask you this… do you think the shift to the cloud is going to be affected by the outcome of the election? I mean, really affected?

The bottom line is that regardless of who wins the election, I feel confident about the long-term prospects of these trends. That’s where you want to be, too.

Editor’s Note: There’s still time to get in on Jim Fink’s “election-proof” trade — but only if you act fast…

Last week, our colleague Jim Fink sat down to deliver a groundbreaking report, where he revealed the strategy he’s been using to deliver profits in up markets, down markets, and everything in between.

He’s confident that no matter who wins this election, the odds on this trade are stacked in your favor.

To get in on this before the election is over — go here now.