Deals Are Heating Up. Here’s What You Need To Know…

No, I’m not referring to the election. As I’m writing this, we still have yet to know the outcome to that race.

But when it comes to the deal-making activity in the market, the race is back on – and there will be clear winners and losers.

It would be an understatement to call the first half of 2020 a dry spell for corporate deal-making. Takeover activity began to stall in February and March when the pandemic struck, and then completely evaporated over the summer. By dollar volume, M&A activity in the U.S. shrunk 85% in the second quarter — one of the worst droughts on record.

But last month, I listed several reasons why pent-up demand for acquisitions would soon be unleashed. We had already seen a few big transactions, including Devon Energy’s (NYSE: DVN) $12 billion takeover of WPX Energy (NYSE: WPX) and the sale of Marathon Petroleum’s (NYSE: MPC) Speedway gas stations to 7-Eleven.

As I said, green shoots.

Indeed, the drought now seems to be over. We were deluged with $408 billion in domestic merger deals during the third quarter. That’s five times the amount closed the prior period — and more than the first half of the year combined. Globally, M&A deals spiked 141% to $900 billion. That’s not just a return to normal — it eclipses pre-Covid levels by 30%.

A Wave Of Big Deals

You can understand why takeover talk was sidelined for a while. There were bigger priorities. Given the economic uncertainty, boardrooms weren’t even comfortable releasing their own internal earnings guidance – let alone sinking billions of dollars into outside businesses.

But we’ve seen a swift recovery since then. After plunging during the lockdown, GDP has been roaring back — surging 33.1% last quarter. That’s the sharpest increase in U.S. history. That pace, aided by stimulus checks and easy quarter-over-quarter comparisons, will surely moderate.

Still, we’ve seen a powerful “V” shaped reversal in both consumer and business spending. And while new infections remain alarmingly high, each day brings us closer to a potential vaccine. At the very least, cash flow visibility has improved markedly – and dealmakers are growing more confident.

The prospect of tax and regulatory changes has also hastened the consummation of some deals. Whatever the reason, buyers that were once gun shy are now pulling the trigger.

Case in point, Gilead (Nasdaq: GILD) recently extended a $21 billion offer ($88 per share) for Immunomedics. The target stock, which closed at $42 the prior day, doubled overnight.

And just last week, Dunkin (Nasdaq: DNKN) shareholders watched their stock surge into triple-digit territory thanks to an $8.8 billion offer from privately-owned Inspire Brands. If the deal goes through, the popular coffee and donut vendor will join other restaurant chains such as Arby’s and Sonic. 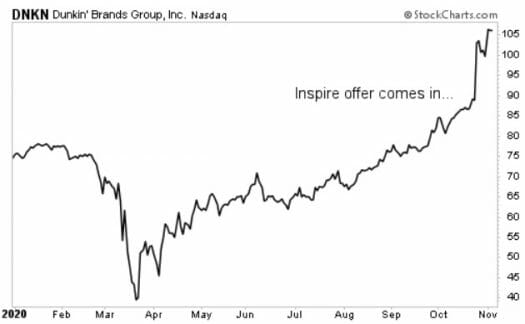 But the busiest sector (accounting for 40% of the megadeals) has been technology, particularly the semiconductor group.

We just got another round of consolidation last week with chipmaker AMD (Nasdaq: AMD) shelling out a whopping $35 billion for Xilinx (Nasdaq: XLNX). For perspective, AMD shares had doubled from the mid-$30s to the mid-$70s, significantly appreciating the currency used to close this stock-swap deal. Thus, XLNX shareholders were treated to a 25% premium.

All of which begs the question: Who is next?

Technology will remain a hotbed of M&A activity. I’ve got my eye on several candidates in this space – yes, semiconductors, but also the robotics and artificial intelligence fields. I’m also monitoring attractive targets in fintech (financial technology), asset management, and healthcare, among others.

For example, did you know that there have been more than 100 acquisitions involving casual dining chains over the past three years?

Inspire Brands (the company gobbling up Dunkin) bolstered its top-line last year with the takeover of sandwich maker Jimmy Johns, whose sales had soared 174% over the previous eight years. Before that, it swallowed sports bar owner Buffalo Wild Wings.

High Bluff Capital scooped up Quiznos and Taco Del Mar. BDT Capital Partners bought a controlling interest in Whataburger. Popeye’s Louisiana Kitchen (one of my personal favorites) was taken over by Restaurant Brands. Shareholders walked away with $1.8 billion, a generous premium of nearly 30%.

Many of your favorite eateries have been targeted by acquirers over the years. Ruby Tuesday… Outback Steakhouse… I could go on, but hopefully, you get the point.

A few buyers have been corporate entities (Cracker Barrel and Cheesecake Factory to name a couple). But if you’ll notice, the vast majority of these once-public companies now belong in the hands of private equity-backed, multi-brand acquirers.

Why is this happening?

Well, the motivations behind deals in other industries are certainly applicable here. Squeezed by rising labor and raw material costs, restaurants often need advantages of scale to thrive. In many cases, acquirers find ways to trim costs and expand margins, utilizing synergies to make two plus two equal five.

IHOP paid over $2 billion for Applebee’s knowing that it could sell off some of the latter’s real estate, reduce operating overhead, and transition from company-owned locations to a lighter franchise model.

But the bigger reason is the fact that growth in this saturated and cut-throat field is often elusive. This is a world where a tepid increase of 3% or 4% in same-store sales (or “comps”) is often considered strong. And adding new units isn’t always feasible.

As I often say, when it’s difficult to achieve organic growth, the best pathway is often to buy it. And I think that’s going to continue happening in the restaurant business in a big way.

Investors would be wise to pay attention to deal-making activity. In fact, my latest Takeover Trader recommendation is right in the sweet spot. Of the ten largest pizza chains, nearly half have been acquired in recent years. And I think one of the remaining five is going to be next…

For the benefit of my premium readers, I won’t reveal which one I think it will be today. The main takeaway though, is that deal-making activity is heating up.

And that’s good news for us. Because if history is any guide, provided we do our research and take positions in strong companies that also happen to be likely takeover candidates, the gains we can see from a takeover bid can be huge – and happen nearly overnight.

P.S. In the meantime, did you know there’s a mining company that is sitting on what could be the largest gold deposit in the world???

We’re talking about over 1,000 tons of gold! And the billionaire that’s leading the charge to mine all this gold out of the ground could provide early investors with the opportunity to make up to 20-times their money.

For the full story on this company and the billionaire with the ‘Midas touch’ – click here.