How These Portfolio Blow-Up Stories From Happening To You

I love learning about new companies, new investment opportunities, and making money in the stock market. But I’m also just as fascinated by the psychology that’s involved with the whole process. Especially when it comes to making mistakes…

We are always told that we can learn from other people’s mistakes. But the truth is we never seem to listen. You can tell a child not to touch the hot stove, but chances are good that they won’t really listen until they’ve suffered the physical pain of burning themselves.

When it comes to investing, I see people make the same mistakes over and over again. Oftentimes, it’s because they ignore some basic tenets — like proper position sizing — and blow up their entire account.

For instance, a few years ago I told readers of my Maximum Profit advisory about a young trader who ended up on the wrong side of a short trade. (Remember, when you’re short a company you’re betting that shares of the company will go down.)

After entering this trade, he woke up the next morning to see that his previous day’s account balance of roughly $37,000 had turned into a negative balance of $106,445.56. He now owed his broker six-figures…

This guy’s story was so widely publicized at the time. So you would think that other traders would have learned from this guy’s misfortune, right?

Wrong. A few months later another story surfaced about a trader who found himself in a similar predicament. As Mark Twain is often reputed as saying, “history doesn’t repeat itself, but it often rhymes.”

This time it was a 24-year old who bet his life savings buying call options on FitBit (this is before Google bought the company). And, of course, he did it on margin. Fitbit, as you may recall, is the company that makes the wearable wristbands and smartwatches that keep track of your exercise and heart rate.

Unfortunately for him, the company reported earnings that didn’t meet Wall Street’s expectations. Shares plummeted on the news, rendering his call options essentially worthless. Since he was using margin — or borrowed funds — to make the trade, here’s a snapshot of his brokerage account ended up looking like: 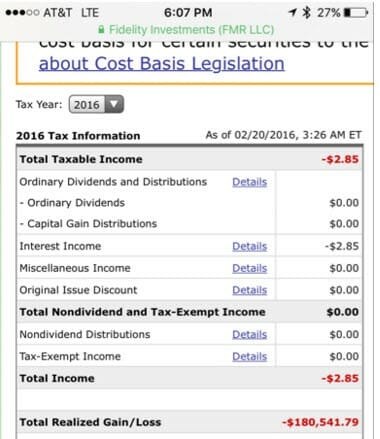 As you can see, he owed his broker more than $180,000. In a diary of confessions that he posted on his StockTwits account, this young trader talked about how he got behind and kept trying to break even. But he never did. (I’ve written extensively on this “hope” that traders hold onto when they have a losing trade, and why it’s dangerous.)

He also talked about how he learned his lesson the hard way. In fact, he had read that same story I shared with you earlier. As a result, he felt like the stock market isn’t his calling and he’ll never trade stocks again.

It’s easy to understand why he’ll probably never touch a stock again. After all, the psychological damage of incurring a $180,000 loss would likely be enough to scar anyone for life. Many investors are still reeling from damage inflicted on them following the 2008 financial crisis.

For many of us, this is the way we must learn. We have to actually get burned by the stove before we decide that we shouldn’t touch it.

There have been many other stories similar to these since then. I read a New York Times article talking about how the popular trading app, Robinhood, has lured in young traders.

Robinhood, which makes buying and selling stocks extremely simple — and commission-free — has soared in popularity. Mainly amongst the younger generations.

And if you think traders have learned their lesson, think again. This article shared the story of Richard Dobatse, who “had been charmed by Robinhood’s one-click trading, easy access to complex investment products, and features like falling confetti and emoji-filled phone notifications that made it feel like a game.”

Filled with dreams of striking it rich trading stocks and options, Dobatse unwisely funded his account with $15,000 in credit card advances. After repeatedly losing money, he took out $60,000 in home equity loans to buy and sell more speculative stocks and options. At one point, he was doing quite well, with a reported account balance of more than $1 million. But that all quickly disappeared, and the New York Times reported his account balance of just under $7,000.

Sure, he didn’t “owe” his broker any money like the two traders in the previous stories. Granted he still owed $75,000 in home equity loans and credit card advances. But he surely made the same mistakes and ended up in a similar spot.

There’s little question that we’re in the midst of an epic trading boom fueled by increased retail participation in the stock market. We live in an era of so-called “meme” stocks, cryptocurrencies, options, and who knows what they’ll think of next.

Unfortunately, there will likely be a plethora of new stories about novice traders who will make the same mistakes as the ones before them. That includes using excess leverage (margin) to execute trades, failure to properly manage risk (proper position sizing), and trading instruments (options) that are out of their wheelhouse.

I want to issue a word of caution about this… Don’t let it happen to you.

I don’t say this to try and scare anyone away from investing in stocks or options. In fact, I like hearing about people’s newfound interest in the stock market. I think it’s a wonderful thing because it can be a great tool to help build wealth, and it’s a great learning experience. Plus, as more investors come to the market, it creates more liquidity.

But if you’re going to play the game and want to build wealth, then you need to do it the right way. That’s why I don’t recommend betting the farm on any one pick we make over at my premium service, Capital Wealth Letter…

Speaking of which, my latest report reveals an “off the radar” investment that’s being totally ignored by most analysts — despite sitting on one of the most disruptive technologies we’ve seen in years…

We’re talking about a total revolution that could change the face of American transportation forever. It may sound like science fiction… but it’s coming sooner than you think.