More Reasons Why Income Investors Should Love This Forgotten Asset…

If you build it, they will come.

Who can forget that classic line from the nostalgic baseball film Field of Dreams, in which an Iowa farmer named Ray Kinsella risks financial ruin to turn a valuable parcel of prime farmland into a baseball diamond? Friends and colleagues thought old Ray had lost his marbles.

I must admit, as a life-long baseball fan, I’ve also been tempted to plow down the backyard and build a field of my own (particularly if the ghost of Shoeless Joe will show up to play a few games). But then again, my neighborhood was built on an old cattle pasture – not the heart of the nation’s corn belt.

Back when Field of Dreams was released in 1989, mid-grade Iowa farmland commanded a price of around $1,000 per acre. Today, that same land fetches around $8,300 per acre, according to a recent survey of farm realtors. That’s an increase of more than 700%. And richer, grade-A farmland often sells for $10,000 per acre or more.

A few weeks ago, I gave a lot of stats like this to support my thesis for owning farmland. (You can read that article here.) I even told you about a unique real estate investment trust (REIT) that allows you to invest.

More on that in a second. But, let’s just say, in short, that farmland has been a very productive asset – in more ways than one.

The Surprising Numbers Behind Farmland

According to the latest census from the US Department of Agriculture (USDA), we lost 12,800 farms last year alone. This continues a longstanding trend towards urbanization. Between 1992 and 2012, the United States lost an estimated 31 million acres of farmland.

That’s a landmass equivalent to the state of Mississippi. And they aren’t coming back. 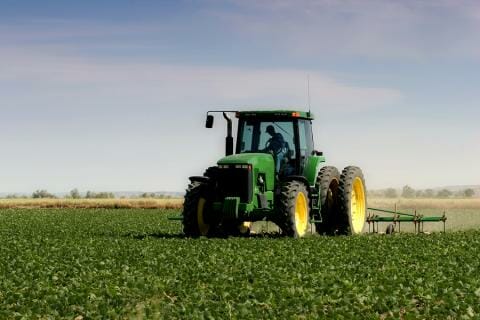 At that rate, roughly 4,200 acres of farmland are disappearing per day, while cities grow increasingly crowded. In per-capita terms, the amount of arable farmland per person has fallen from 1.1 acres in 1960 to just 0.6 acres today.

Here’s another remarkable stat… According to the National Council of Real Estate Investment Fiduciaries (NCREIF), farmland values increased 14.7% annually on average between 2004 and 2018, versus 9.1% for the S&P 500. And that’s with half the volatility.

And any capital appreciation is just icing on the cake. After all, farmland isn’t really bought for its growth potential. Sure, you might exit in the future at a higher price than you paid. But first and foremost, this is an income-producing asset class.

Investors typically don’t know the first thing about farming. So after buying the land, they immediately lease it back to experienced operators. This is often done through a sale, lease-back agreement. The income is usually far more than you’d get from a bond portfolio — and bonds generally don’t appreciate each year.

More than half of the farmland in states like California and Iowa is occupied by tenant farmers who lease the land. And the rent checks are backed by whatever crops are grown — with the added insurance of $25 billion in average annual government farm subsidies.

Like any asset class, farmland values are largely influenced by supply and demand. It’s perfectly clear where the supply side of the equation is headed. But what about demand? Well, we can debate the future of some commodities like gold or oil, but there’s no denying the unwavering need for food — be it fruit, grain, or vegetable.

Food consumption is rising inexorably higher as the global population grows by 200,000 people per day. Put it all together, and you’ve got a concrete macro backdrop for the steady upward march of agricultural prices.

Big-Money Institutions Are Gobbling Up Farmland

Pensions, endowments, and other “smart money” institutions have been piling into this new asset class. So have hedge fund managers — and their wealthy clientele.

Back in my original article on farmland, I mentioned TIAA-CREF. The giant teachers’ pension fund has gobbled up more than $8 billion in farmland (including wine vineyards) and is now the world’s largest agriculture investor. When asked why, a top director cited the simple fact that agricultural output must expand by 70% over the next three decades to meet demand.

The organization is actively looking to acquire more and expecting 8% to 12% long-term returns, referring to farmland as a “store of wealth, kind of like gold.” True, farmland and gold are both reliable hedges against inflation – but precious metals don’t generate income.

There are plenty of other heavy-hitters attracted to the strong yields and low volatility of farmland. Since the sub-prime mortgage crisis erupted, Harvard University’s chief endowment has invested nearly $1 billion in farmland from Australia to Brazil.

Elsewhere, Swiss banking giant UBS bought 9,900 acres of tillable soil in Wisconsin, along with 1.6 million bushels of grain storage. It followed up with the purchase of 19,200 acres in Texas and now owns around 50 properties devoted to growing vegetables, rice, apples, and other crops.

How You Can Invest

Unfortunately, the door has been locked to ordinary investors like you and me… unless you have a few million to spare and are willing to show up at deed auctions and outbid other land moguls like Ted Turner.

Fortunately, there is a publicly-traded company designed and built for this very purpose. I already mentioned it in my previous article — Gladstone Land (Nasdaq: LAND).

Now, don’t get me wrong, LAND is a great option for investors to consider. I’ve held it previously in other premium newsletters I’ve helmed, and we’ve done very well with it in the past. But as I pointed out in that piece a couple weeks ago, the yield (about 3.7%) may leave a little to be desired for most income-minded investors.

But for the first time, there’s a new way to get in on this asset – and it carries a 6% yield. That’s why I told my High-Yield Investing subscribers that and I’m getting in.

If you’d like to learn more about this pick – as well as access all of our research and our entire portfolio, then I invite you to join us. You’ll join the ranks of thousands of like-minded investors who refuse to settle for the paltry yields that the market has to offer.