Want To Bet Against Stocks? Here’s The Best Way To Do It…

I hope you all had a wonderful Thanksgiving. And as we begin to prepare for Christmas, I hope you’re making plans to step away from the market a bit and spend time with the ones you love.

In case you hadn’t noticed, I took some time off from these pages recently. One reason for that was because of the holiday. The other is because I got married the prior weekend, and the new wife and I were honeymooning during the week of Thanksgiving.

We went to Charleston and Savannah and had a wonderful time. If you plan on going, drop me a line and I’ll give you some recommendations. Here’s just one of the many amazing views you’ll see (this one is in Charleston)… 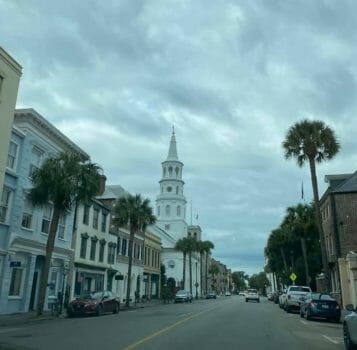 So these aren’t just empty words. I mean it. The market will be there when you get back. If this year has taught us anything, it’s that human connection is still vitally important in this modern age. Money means nothing if you don’t have anyone to share it with – or a legacy to leave behind.

With that being said, I’m already thinking about the road ahead. For my wife and I, that means checking off the boxes on the numerous items that must be done when two people get married… Insurance, bank accounts, taxes, retirement… the list goes on.

But another thing I’m watching closely right now is the growing number of bloated, overvalued companies on the market. Frankly, it’s concerning. I’ve already started compiling a list of companies I absolutely would not touch with a 10-foot pole in this market.

My colleague Jim Pearce feels the same way. Some of you may know he was on the front lines during the dot-com bubble as well as the 2008 financial collapse. And he not only survived both events, but prospered.

Jim has been telling his readers for the past few months about these “zombie” companies. He calls them that because they’re only being kept alive by the Fed’s massive, unprecedented stimulus and the irrational exuberance of investors.

Eventually, these stocks will come crashing back down to earth. It’s not a matter of if, but when.

The good news is that you can profit from all of this. And you don’t have to be a wild and risky short-seller to do it. In fact, there’s a much safer and effective way — by using put options.

Use Put Options To Profit On The Downside

Buying put options is a common way of going “short” a stock. But with options, we have the opportunity to preserve our trading capital by risking less money upfront, while also magnifying our potential profits.

You see, put options go up in value when the underlying security drops. Technically speaking, a put is an option contract that gives the owner the right, but not the obligation, to sell 100 shares of stock at a specified price (the strike price) at any time before a specific date (the expiration date). When the price of the underlying stock falls, the price of the put option goes up. Usually, you’re simply looking to sell the put for more than what you bought it for.

One of the best ways to use puts as a substitute for shorting is with in-the-money put options, as they will closely mimic the stock.

Let’s say IBM (NYSE: IBM) shares are currently trading at $100. (I know that’s not the current price, this is just a hypothetical scenario…)

We think IBM is headed lower, so we purchase one put option contract on IBM. The put option we select has a $100 strike price and a premium of $2.

Investors generally buy puts on stocks they expect to move lower. Here’s what will happen to the value of this put option under a variety of different scenarios:

When the option expires, IBM is trading at $95.
The put option gives the buyer the right to sell shares of IBM at $100 per share. In this scenario, the buyer could purchase shares on the open market for $95, then immediately use the option to sell those shares at $100. Because of this, the option will sell for $5 on the expiration date.

Since each option represents an interest in 100 underlying shares, this will amount to a total sale price of $500. Since the investor purchased this option for $200, the net profit to the buyer from this trade will be $300, a 150% return.

Also important: Had we shorted 100 shares of the stock outright, it would have cost $10,000 (plus commissions and borrowing costs) to net the same $500.

When the option expires, IBM is trading at $99.
Using the same scenario above, the put option will now be worth $1 (or $100 per contract). Since the investor spent $200 to purchase the contract in the first place, he or she will show a net loss on this trade of $100.

When the option expires, IBM is trading at or above $100.
If IBM ends up at or above $100 on the option’s expiration date, then the contract will expire out of the money. It will now be worthless, so the option buyer will lose 100% of their money (in this case, the full $200 that he or she spent for the option contract).

What’s important to keep in mind here is that losing $200 isn’t the end of the world. Had we shorted the stock outright with 100 shares, we likely would have lost much more. For example, if IBM was at $105 and we shorted 100 shares, we’d be sitting on a $500 loss.

This is where the dangers of shorting — and the benefits of put options — come into play.

But with put options, you only risk losing what you pay to control. That means you can think in terms of what you would be “okay” with losing and scale up your trades to increase your upside. On the flip side, you can play it safe and only take a flier on a short idea while keeping plenty of dry powder on hand to pursue other trading ideas.

If Jim is right (and I certainly think he is), then owning puts on certain stocks in the coming months is going to be extremely profitable.

If you agree, then do yourself a favor and learn more about buying put options. You’ll find that it’s not only easy to learn, but also kind of fun to take the other side of a trade in a market full of overly eager enthusiasm.

Jim and his readers are already profiting from his ideas, but there are still plenty of opportunities to profit from overvalued stocks in this market.

So if you’d like to learn more about his strategy, go here now.