While most Americans toiled away in the kitchen last Wednesday preparing for Thanksgiving, there were rumblings in the M&A world… potentially signaling a seismic shift.

It was a relatively quiet day for the market, with the major averages sliding modestly lower. But one stock surged 40% to a new all-time peak on extremely heavy volume. More than 140 million shares changed hands.

The Wall Street Journal ran an article suggesting that Slack Technologies (Nasdaq: WORK) was in talks to be acquired. Word spread like wildfire, and by the closing bell, the company had gained more than $5 billion in market capitalization – in a single day.

This latest advance caps off a powerful return of about 90% over the past year. 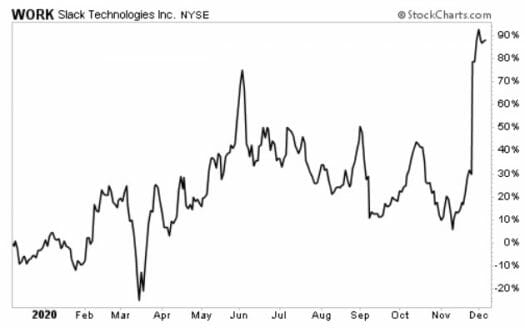 You may be familiar with Slack, which refers to itself as a “collaboration hub”. The company aims to make email obsolete. Sending a message to an inbox and then waiting hours (or days) for a response is so 2003. Slack’s online messaging service allows millions of workers to stay in constant contact with colleagues — whether they work down the hall or in another country.

Take StreetAuthority, for instance. I work remotely from my home in Louisiana. My editor telecommutes from Austin, Texas. Other staff members live in Idaho, and just outside of Washington D.C., to name a few places. And yet, thanks to technologies such as Slack and Zoom, we have a cohesive group that stays in constant contact during the workday and collaborates as seamlessly as if we were all seated around the same conference room table.

The only thing missing is the water cooler gossip.

A Big Fish To Swallow

Slack added 8,000 new corporate clients last quarter. Now, it has nearly 100 large-scale customers (including Fortune 100 giants) that each generates over $1 million in annual revenue. Needless to say, with countless employees around the world working remotely from home during the pandemic, Slack’s communications tools have become indispensable to many groups. But there aren’t too many fish big enough to swallow this $20 billion enterprise.

Jeff Bezos has the financial clout and is clearly interested in Slack’s capabilities, having recently formed a strategic partnership between Slack and Amazon’s (Nasdaq: AMZN) web services division. Microsoft (Nasdaq: MSFT) mulled a bid for Slack back in 2016 but ultimately decided to develop its own in-house videoconferencing tool, Microsoft Teams, which has since attracted 115 million active daily users.

No need to speculate. The suitor is none other than Salesforce.com (NYSE: CRM), best known for its customer relationship management software. Salesforce has a voracious appetite for buyouts, having absorbed more than 60 acquisitions over the years. Some of the more notable recent purchases include ClickSoftware for $1.4 billion, Mulesoft for $6.5 billion, and Tableau for $16.5 billion.

We can now add Slack to the list. Salesforce made it official after the closing bell Tuesday, extending a $28 billion cash and stock offer. It ranks as one of the ten biggest deals ever in the tech sector.

It won’t be the last.

Where Things Are Headed

Critics have slammed the acquisition as too expensive. But it demonstrates just how much the cold M&A environment has thawed in recent months. Back in August, Salesforce CEO Marc Benioff shook off the possibility of a deal, saying conditions weren’t right. Four months later, he pulls the trigger on the biggest deal in company history.

An improved financial standing deserves some of the credit. The company’s revenues, margins, and cash flows have all rebounded to record levels. But forward-looking leaders like Benioff aren’t just spending money because it’s there. The pandemic has accelerated fundamental shifts that were already underway — forever changing the way people live, work, shop, and play.

Companies that are slow to adapt to this changing landscape will be left behind. Nobody wants to be a victim of corporate Darwinism. That’s why old-school companies like IBM are staking their future on cloud-ready partners such as Red Hat. It’s why cash-rich giants like Microsoft are expanding their digital reach with add-ons such as LinkedIn.

In any industry (not just tech), consolidation gives merged organizations an edge. And this forces other competitors to find their own dance partners.

That’s certainly true in the Software as a Service (SaaS) field – where M&A activity reached a record high last year. As we saw with Slack, the new work-from-anywhere environment has made well-positioned niche players irresistible targets.

I expect to see more activity like this in the coming months. And my readers and I are ready to answer the call. You should be, too.

For example, our investment team has found a stock that’s a play on both biotech and marijuana. It’s a small-cap drugmaker that has developed a non-addictive “marijuana pain pill.” The pill is a cannabis-based, non-opiate pain remedy that could be the blockbuster pharmaceutical of the future.

Now’s the time to invest in this medical marijuana company, while it’s still flying under the radar. Click here for details.