The hits just keep coming. You may have missed this news in the wake of the election and inauguration, but Facebook (Nasdaq: FB) and Alphabet (Nasdaq: GOOGL) are in the crosshairs of Washington again.

Both are facing more potential antitrust litigation, and there seems to be a growing (rare) bipartisan consensus around the issue. So far, shares of both companies have taken a slight hit – with Alphabet already recovering, while Facebook is slightly down.

I don’t want to get into the nitty-gritty details of all of this just yet. But I do want to spend some time briefly recapping what’s going on – and offer what may be a contrarian take on how it could affect investors if this advances to the point of a “breakup”.

In Facebook’s case, the Federal Trade Commission (“FTC”) and 48 attorneys general are seeking to potentially break up the social media titan over alleged monopolistic behavior. Again, I’m not a legal expert and I won’t get into the finer points of this, but their claim essentially boils down to this… If they had known how big and successful Facebook’s other services like Instagram and WhatsApp would have become, then they wouldn’t have allowed Facebook to acquire them.

Obviously, that’s not a great argument. Nonetheless, at this point, it seems Facebook will likely have to pay some fines. That’s something the company can do easily with its $55 billion war chest of cash.

But let’s say the company does get broken apart. This would likely be beneficial to shareholders, as it would unlock tremendous value.

After all, you have Facebook itself, which is an advertising machine. Then you have photo-sharing app Instagram, and messaging app WhatsApp, and the virtual reality division, Oculus. If investors had the chance to value each company separately, it would likely lead to a higher overall valuation.

The situation is similar with Alphabet… you have Google (advertising juggernaut) and YouTube, which is also a money-making machine. You also have a whole host of other divisions working on high-growth potential projects. If the government split apart Alphabet, it would remove the “conglomerate discount” and likely lead to an overall higher valuation.

Now, will it get to this point? Anything is possible, but we’re not even close to that point yet. So right now, I personally don’t see these companies being forced to break up.

But if we ever do get close to that point, and you own either one (or both) of these stocks, then keep in mind that it wouldn’t necessarily be terrible for shareholders.

Over at my premium Top Stock Advisor service, we’ve owned both of these stocks for quite a while. We’ve stuck with them through thick and thin. As a result, we’re sitting on nice gains in both stocks — up over 130% in Facebook and more than 60% in Alphabet. We’ve crushed the broader market handily with both during the time we’ve owned each of them… 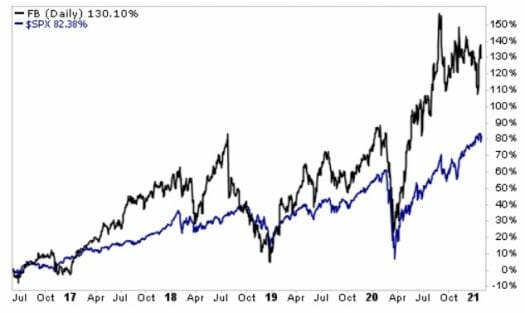 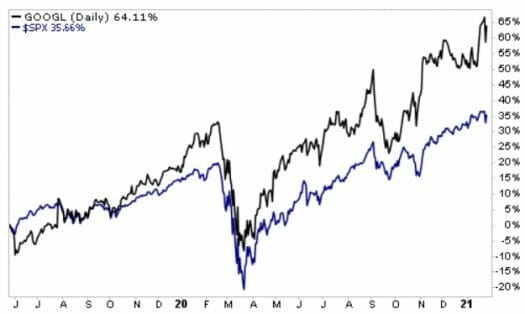 Now, I don’t think I’d buy at these prices. But the point is that both of these giants have been through the ringer before. And they’ll likely continue to reward investors for years to come.

P.S. My team and I have just released a report of our annual predictions for 2021. And what we’ve uncovered may shock you…

It could also stuff your portfolio with massive profits. Because they challenge the conventional wisdom, these predictions are the most controversial market calls we publish all year. But they are also the most hotly anticipated… investors who followed our predictions in past years have had the chance to rake in 622%, 823%, and even 993%.