I Don’t Want To Be Holding The Next IBM. Here’s Why…

This could surprise a lot of folks, but I just recently sold one of our longest-tenured holdings over at my premium newsletter, Top Stock Advisor.

After nearly a decade in our portfolio (first recommended in September 2011), Intel has done well for us.

But I’m cutting ties for a simple reason: I don’t want to be holding the next International Business Machines (NYSE: IBM).

What do I mean by that? Well, allow me to tell you a little story so that you can understand what I mean…

Struggling To Right The Ship

First, let’s talk about the company’s fourth-quarter earnings that were released just before the closing bell on January 21.

Why do I emphasize “just before” the closing bell? Well, more often than not, companies wait until the market is closed to release earnings figures — either in the morning before the opening bell or after the market closes.

Intel was scheduled to release after the market closed on January 21. But as you can see in the chart below — this is a 5-minute chart of Intel — shares popped right before closing (the shaded area marks closing and after-hours trading.

So why did they do this? It turns out that Intel was hacked…

Intel said a hacker obtained an infographic with sensitive financial data. Once the company realized what happened it released its quarterly numbers six minutes before the close.

Of course, this fact alone isn’t the reason I’m selling Intel. But it just highlights the problems that have plagued the company (and will likely continue to weigh on the company).

The biggest problem: Intel still hasn’t shipped a single 10-nanometer chip. This has been a four-year delay now. I gave the company the benefit of the doubt. But while Intel was stumbling through its manufacturing missteps, competitors didn’t just walk by, they ran by Intel.

I’ll give you an example. Taiwan Semiconductor (NYSE: TSM) is already working on 5-nanometer chips — an entire generation ahead of the Intel chips that have yet to ship.

Then a few months ago Apple decided it no longer needed Intel to produce chips for some of its products. Instead, it’s going to design its own chips and have TSM manufacture them. And from what I’ve read, Apple’s chips are already far and away better than Intel’s…

In short, Intel has fallen way behind its competition, and it’ll take some time for it to catch up. If it ever does.

INTC will likely be a favorite among Wall Street for a while. But I can already see the writing on the wall…

INTC still produces plenty of cash flow and is trading relatively cheap compared to other semiconductor stocks. But Wall Street loved IBM for the same reasons.

Sure, IBM said all the right things about “transforming the company” to “right the ship”. And the Street gave it the benefit of the doubt for years because it was a cash flow machine. There was just one problem. It couldn’t turn things around… and here’s how it’s performed over the last 10 years. 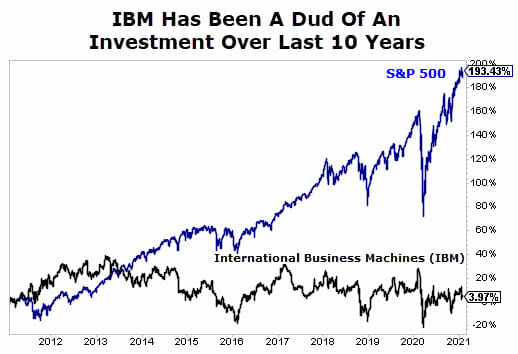 That’s right… Big Blue has eked out a meager 4% total return over the last decade, while the S&P 500 has ripped off a nearly 200% return.

In short, I think a similar story is repeating with INTC. I don’t know exactly what is going on inside the company, but from where I sit, there certainly are some parallels.

Intel has always been the leader in the $400 billion chip industry. Sure, it’s had its troubles. But up until recently, the company was always able to overcome them. To be fair, the company posted sales of nearly $78 billion for 2020, an 8.2% increase over 2019. It churned out $21.1 billion in free cash flow on the year.

But the company is no longer the leader of the pack… it’s quickly losing its position to rivals.

Fortunately, Intel has performed well for us while we’ve held it in Top Stock Advisor. We ended up booking a total return of 159% — a gain I’m happy to take any day. But rather than continue to hold on to INTC, I want to own a piece of the future…

If you’re looking for the one life-changing investment that could also stuff your portfolio with massive profits, it could very well be in this report.

That’s because these predictions challenge the conventional wisdom, allowing investors who followed our predictions in past years to rake in gains of 622%, 823%, and even 993%.

To get the details on the most controversial market calls we publish all year, go here now.