Score One For The Little Guy…

Unless you’ve been living under a rock, you have probably heard all about the explosive gains in a certain video game stock unleased by a horde of motivated investors. Just in case, here’s a brief recap.

A couple of weeks ago, a group of like-minded investors on an investing forum inside the social media site Reddit banded together to start buying shares in GameStop (NYSE: GME). The beleaguered retailer had just welcomed a distinguished new board member, and some viewed the beaten-down $17 stock as an undervalued turnaround play.

But there was another motive – taking down Wall Street fat cats (their words not mine).

You see, GameStop was the No. 1 target of short-sellers. Many savvy investors (most notably large hedge funds) had been betting against the stock for years, profiting nicely from the gradual erosion in GameStop’s sales. The specialty retail chain reported a steep loss of $470 million last year as digital video game downloads stunted customer traffic into the firm’s 5,000+ brick-and-mortar locations.

Many were expecting the foundering business to show further declines in 2021. To take advantage, they established short positions. In the simplest terms, this involves borrowing large blocks of shares and immediately selling them. A few weeks or months later, the shares are repurchased (ideally at a lower price) and returned to the original owner — with the trader pocketing the difference.

This is a risky tactic. If you buy a stock at $10, the most you can lose is $10. And that’s only if it winds up completely worthless. But if you sell short at $10, the stock can rise to $20, or $30, or $40. The more it rises, the more you lose. So in theory, the potential risk is unlimited. Although in practice, traders take steps to limit their losses.

In all honesty, I have no real love for institutional short sellers that exist solely to prey on the weak. Proponents argue the practice helps deter asset bubbles and makes the market more efficient. That may be true. But some of the less scrupulous (not naming names) deliberately disseminate misleading, controversial, and even erroneous information to spook investors and profit from the panic.

It’s a bit like yelling fire in a crowded theater – patrons don’t bother looking for smoke; they run. Or in this case, sell.

Let’s just say that my dislike of institutional short sellers is tame compared to the open hatred shared by many Reddit users. They have been likened to an angry mob wielding digital pitchforks, not just against hedge funds like Melvin Capital, but Wall Street blue-bloods in general. So they devised a clever plan to inflict pain on the financial establishment and make a few bucks in the process.

This group (6 million strong) started aggressively buying GameStop shares. And buying. And then buying some more. All that demand started lifting the stock. When a heavily-shorted stock rises, short sellers start to get anxious. If the rally continues, some are forced to cut their losses and exit the trade.

How do they do that? By purchasing shares to replace those initially borrowed. That rush of buy orders exerts more upward pressure on the stock price, which in turn has more short-sellers scrambling to cover, which then pushes the stock even higher.

I discussed the basic mechanics of this phenomenon a few years ago and spotlighted my favorite short squeeze candidate SiriusXM Radio (Nasdaq: SIRI). Hated by many, I bought the stock near $3 per share. It has since more than doubled, but still has its share of detractors.

Short squeezes tend to feed on themselves as traders stampede for the exits and unwind their positions. This was the mother of all short squeezes. GME stock climbed to $20 on January 12, surged to $30 on January 13, and then hit $40 on January 14. Traders (long and short) started to take notice, but things were just getting started.

About a week later, GME suddenly vaulted to $65 on an extremely heavy trading volume of 200 million shares (about 10 times normal). And that’s when all hell broke loose. The stock closed near $150 on January 26, spiked to $380 the following day, and then zoomed as high as $483 the next day. 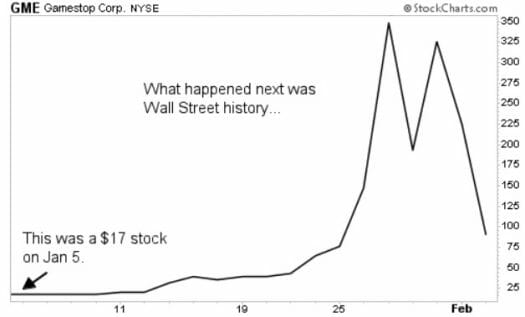 On January 5, shares of this struggling business were deemed to be worth just $17. Three weeks later, they were changing hands at $480. That’s a moonshot gain of more than 2,700%. Some traders raked in even larger profits by buying out-of-the-money call options on GME. Call options are leveraged bets (each contract controls 100 shares) that can easily magnify gains or losses 10 times over or more.

In fact, it was heavy options trading that exaggerated the short squeeze to begin with. Take a stock that soars nearly 30-fold and then multiply that return 10 times in the options market, and you’re talking about once-in-a-lifetime returns.

One fortunate investor reportedly took the cash windfall from a few days of trading and used the proceeds to repay $80,000 in student loan debt. What about the hedge funds on the other side of all these bets? Well, one study by research fund Ortex reveals that they lost $19 billion on GameStop stock last month – not that many tears were shed.

Trading action in recent days has been so heated that several online brokers halted buy orders on GME stock. The decision (which resulted from back-end clearing and settling mechanics) incited cries of favoritism and spawned over a dozen class-action lawsuits. The ongoing saga has been front-page news on almost every media site. Even congressional leaders have weighed in and urged an investigation.

Everyone Has An Opinion, So Here’s Mine…

Suddenly, people that don’t know a capital gain from a toaster are taking an active interest in the market and asking questions. That’s a good thing. Whatever the catalyst, I hope it continues. But I’d think twice before joining the cause.

I’ve always had a soft spot for GameStop and still shop there from time to time. But then again, I’m one of a dying breed who still prefer physical media such as DVDs and paperback novels to online streaming and e-readers. There’s no denying that technology has seriously disrupted GameStop’s business model, particularly the repackaged sales of pre-owned video games.

To its credit, the company is meeting the challenge head-on and transitioning towards more of an omnichannel retail model – its e-commerce sales surged 257% last quarter. Still, earnings are expected to remain in negative territory over the next couple of years.

That’s fragile support for the now hefty $20 billion market capitalization. Investors aren’t buying right now because they feel GameStop’s assets and cash flows are worth $300 per share; they’re buying because they hope some sucker out there will be willing to pay $400 tomorrow. That’s not investing – it’s a pyramid scheme. I’ve seen it before, and it rarely ends well.

As I write, GME was giving back a big chunk of gains (about $80 per share) this morning.

But GameStop wasn’t the only battleground. Other heavily-shorted stocks have seen similar (albeit more modest) gains. One of those is AMC (NYSE: AMC), which has just leaped from $3 to $15 per share, a 400% advance. I’m glad to see my former High-Yield Investing holding getting some love (and several of you have been kind enough to share success stories).

I think the obituary on this one was written way too soon and applaud the intent. But the stock may have gotten ahead of itself. I will likely be cashing out gains in my personal account.

The latest word is that Reddit users are trying to upend the silver market (a much more ambitious and unlikely goal).

Whatever happens, we probably haven’t seen the last of this concerted effort for the Davids of the investment world to slay a few Goliaths. So stay tuned.

In the meantime, my friends over at Top Stock Advisor have just released their report of “shocking” predictions for the coming year…

Among them, you’ll learn why they believe violence in Peru could push one $2 stock north of $40… how a revolutionary breakthrough in air travel could make early investors rich… and the “odd” reason one small group of mining stocks could soar in the coming months (they’ve done it before – more than once).