This “Weird” Investment Could Be The Key To Life-Changing Gains…

A civil war was tearing the country of Sri Lanka apart. More than 40,000 civilians were killed, and many more fled the country as refugees. One of those refugees was six-year-old Chamath Palihapitiya.

Palihapitiya and his family moved to Canada and tried to assimilate into their new country. It was tough for his father to find consistent work and his mother worked long shifts as a housekeeper. Money was scarce.

Growing up, Palihapitiya worked part-time to help his family while attending school. He graduated high school at the age of 17 and went on to get his electrical engineering degree in 1999. He moved to California and quickly worked his way up the ranks. He joined AOL and became their youngest vice president ever, heading its instant messaging division in 2004.

He later went on to work at Facebook (Nasdaq: FB) and became an early senior executive at the company.

Palihapitiya always had a knack for investing in other companies, and in 2011 he left Facebook to launch his own venture capital fund, Social Capital. 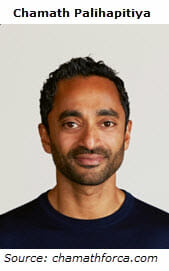 Today, Palihapitiya no longer needs to worry about money. I’m sure his family is very well taken care of. And if you aren’t familiar with him, you will likely see his name pop up everywhere…

Palihapitiya is a minority owner of the NBA’s Golden State Warriors, He served on the board for Slack Technologies (NYSE: WORK) for two years. He’s wildly popular on Twitter, where he has more than 900,000 followers. He’s been a big critic of his former employer Facebook. He may even run for Governor in California – currently he’s calling for a campaign to recall Governor Gavin Newsom.

He even jumped into the GameStop (NYSE: GME) drama recently. (If you aren’t familiar with the GameStop drama, please read this article.) In short, it’s been one of the most fascinating things to come out of finance, pitting (likely young) retail traders against hedge funds and institutions. It even crippled the hedge fund Melvin Capital.

Palihapitiya played his part, rallying alongside the popular Reddit group, Wallstreetbets (or “WSB”). He even purchased call options, getting in on the trade. His investment wasn’t a play to make him a fortune, though. He donated his earnings to the Barstool Fund, which is a fund helping struggling small businesses around the United States – it was started by another polarizing figure, Dave Portnoy.

But I digress… The point is, you may not always agree with his politics, or his controversial views on other issues, but one thing is certain… he’s very intelligent, and a very savvy investor.

Remember his name. Chances are good you’ll see it a lot more this year, and in the years to come.

One big reason is because Palihapitiya is intimately familiar with the latest trend coming out of Wall Street: SPACs. You might say he even resurrected it.

If you haven’t heard this term before, that’s okay. It stands for special purpose acquisition company, also known as a “blank check company”.

Palihapitiya is quickly becoming known as the “king” of SPACs. And today, I want to dive into this world so you can learn more about it — and hopefully, profit…

Last year was the biggest year for initial public offerings (IPOs) in terms of proceeds, filings, and completed deals since 2014. Just look at the recent IPOs of Airbnb (ABNB) and DoorDash (DASH), which went public on December 9 and December 8, respectively. They came to the market sporting massive market capitalizations of more than $90 billion and $50 billion, respectively.

But it wasn’t just the size of IPOs that made 2020 unique. It was the rise in popularity of SPACs — 2020 was also a record year for these unique investment vehicles.

Think of SPACs as sort of a “backdoor” into becoming a publicly-traded company. They are shell companies whose sole purpose is to raise money through an initial public offering to buy or merge with another (real) company.

Once a target company is identified, shareholders in the SPAC vote on the deal… and if it passes, the SPAC’s target does a reverse merger into the SPAC. Once a SPAC lists on the public market, it typically has 18 to 24 months to identify and close a deal.

It can be sort of confusing… but in the end, DraftKings was brought to the public marketplace through a merger with Diamond Eagle Acquisition.

SPACs aren’t anything new. They’ve been around for decades. They’ve just simply made a comeback of sorts. And one of the most well-known SPAC deals of all time goes back to 2017… and Chamath Palihapitiya. 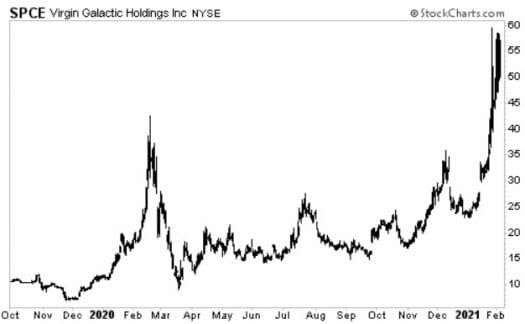 Earlier this month, another one of his SPACs announced that it has acquired target company. And as you may have guessed, that company is the latest recommendation over at my premium service, Top Stock Advisor.

Now, I won’t get into the details of this particular company today. Not only would it not be fair to my premium readers, but there’s just so much ground to cover, both with this company, and with SPACs in general.

Also, please note that SPACs are highly speculative investments. It’s pertinent to take smaller than normal position sizes when investing in more speculative plays like this one.

While I believe that our pick over at Top Stock Advisor has great prospects, it doesn’t come without risks. SPACs often see a lot of volatility as the transaction takes place and folks begin understanding what the underlying company of the SPAC will be (in this case we already know). And I certainly don’t recommend you go and buy a SPAC before it’s announced its target.

But what I want you to take away from today is that I think SPACs are here to stay. And if you’re looking for big-time gains from the innovators of tomorrow, then you need to learn about them today.

P.S. If you’re looking for the one life-changing investment that could also stuff your portfolio with massive profits, then listen up…

My latest report of Shocking Investment Predictions For 2021 is full of research that challenges the conventional wisdom. We’ve gathered our resources to think and plan for what’s coming — not how things are today. And while we don’t have a crystal ball, many of our past predictions have come true, allowing investors the chance to rake in gains of 622%, 823%, and even 993%.