When You Own A Stock Like This, It Pays To Ignore The Noise…

I’ve said it before, and I’ll say it again… When it comes to investing, it’s best to check your biases and leave them at the door. In the end, you’ll wind up far richer than the average investor who lets their own feelings about a company get in the way.

For those who’ve been following me for a while, you may remember that I’ve said this about many different companies and industries. (For example, I’ve told readers time and time again that the massive growth in video games and esports leagues is here to stay. Ignoring it would be a big mistake. Just because you may think it for “the kids” or it’s that it’s silly, doesn’t mean you can’t profit handsomely.)

Another example of this is with social media giant Facebook (Nasdaq: FB).

The company recently reported earnings on January 27. Shares have slipped in the wake of the earnings news after the company (once again) crushed analyst expectations. But despite this, I’m hanging on.

Facebook gets a lot of attention, most of it negative. And it’s been repeatedly under fire from Capitol Hill, the media, and sometimes even its own user base.

The company probably deserves a lot of the negative attention it receives. It surely incites a lot of emotions from many people. But I’m not here to debate the merits of Facebook. From a pure investment standpoint, the company is underappreciated.

Now for some perspective… Facebook has a market capitalization of $757 billion. When companies become this large it can take a lot to move the needle on sales and profits. This simply hasn’t been the case for Facebook, as it’s been growing sales at a fast clip for years now.

Also, the company has $62 billion cash on hand and just implemented a $25 billion stock repurchase program.

Other highlights from the quarter include the fact that it continues to grow its user base. Looking at its daily active users (DAUs) and monthly active users (MAUs) shows a double-digit increase in both key metrics during the fourth quarter over the same period a year ago. The company boasts 2.8 billion MAUs.

When I originally recommended Facebook back in June 2016, I touched on the impressive growth that was happening.

And pretty much all it has done since then is crank out impressive sales, earnings, and cash flow. It’s also delivered us a nice 123% return over the last four years. This handily beats the S&P 500’s 80% return over the same period. 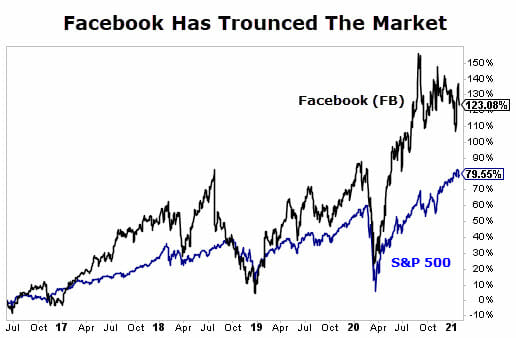 The fact that it has done all of this under fire is even more impressive. And there’s still growth ahead… For example, in my original piece, I also mentioned how I liked its entrance into the virtual reality (VR) market with the purchase of virtual reality gaming company Oculus in 2014. And while it didn’t (and still doesn’t) move the needle for Facebook’s top line, I believed that virtual reality would eventually take off.

Right now there’s a lot of excitement around VR potentially reaching critical mass soon. Gaming companies are coming out with better and more affordable equipment and games. And indications are that Facebook’s Oculus headset like hot cakes in the fourth quarter.

Facebook doesn’t break out its Oculus sales. It’s just lumped in with “Other Revenue” — but this revenue segment grew 156% year over year, pulling in $885 million.

And as far as potential antitrust regulation goes, let’s just say I’m not terribly concerned at the moment. (I discussed why in this piece – and even discussed how Facebook could be worth even more if it were broken up.)

So far, every single controversy that has come along for Facebook hasn’t altered the investment thesis for owning it.

Now, should you buy FB today? That’s up to you. But the point is, don’t get distracted when a “wide moat” company comes under fire. You should assess the situation and determine whether it will materially impact the operations of a company long-term.

Editor’s Note: In the meantime, if you’re looking for a life-changing investment that could also stuff your portfolio with massive profits, then check this out…

My latest report of Shocking Investment Predictions For 2021 is full of research that challenges the conventional wisdom. We’ve gathered our resources to think and plan for what’s coming — not how things are today. And while we don’t have a crystal ball, many of our past predictions have come true, allowing investors the chance to rake in gains of 622%, 823%, and even 993%.