How To Cash In As Online Sports Betting Sweeps The Nation

You gotta love the simplicity of the bookmaking business model. Bookies use the losing pool of bets to pay off the winning pool, keeping a commission (“vigorish” or “juice” in industry parlance) for itself.

According to the Nevada Gaming Control Board, legal sportsbooks in Las Vegas and elsewhere around the state handled $5.3 billion in wagers last year and pocketed a record $329 million in winnings. In percentage terms, the bookmakers retained a profit (or hold) of 6.2% of every dollar bet, a bit above the long-term average win rate of 5.5%.

For decades, Nevada was the only game in town for sports gamblers. It was illegal just about everywhere else. Not that illicit betting didn’t run rampant, especially for marquee events. Studies by the American Gaming Association suggest that 97% of all wagers on the Superbowl go through less-than-legal channels… local bookies, office square pools, offshore entities.

Illegal bets aren’t tracked and counted, so nobody knows for sure how much cash has really changed hands. But black-market sports betting was a thriving business.

Notice the past tense there. As you may know, the U.S. Supreme Court overturned the longstanding federal ban on sports betting in 2018. The landmark ruling opened the door for the regulation (and, of course, taxation) of legalized sports betting.

Delaware was the first state to take advantage, passing legislation within hours to authorize sports wagering. New Jersey was next. And then the floodgates opened. Mississippi. West Virginia. Pennsylvania. Michigan is one of the newest members of the group, becoming the 20th state to legalize some form of sports betting. Over a dozen more have passed favorable bills or ballot initiatives and only need to finalize the details. 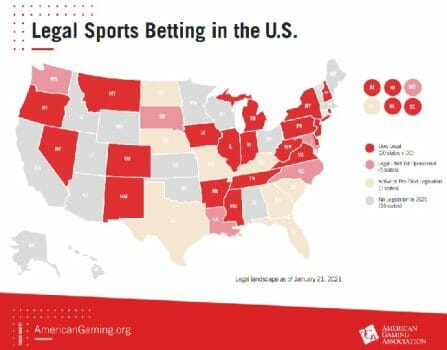 This industry is still in its infancy, but the early numbers are eye-popping. Pennsylvania bettors have been plunking down over $300 million per month. Last September, New Jersey bettors placed $748 million in sports wagers – in one month — smashing even Nevada’s records.

Keep in mind, this happened despite New Jersey’s brick-and-mortar casinos being restricted to 25% capacity because of Covid.

Most of those bets (between 80% and 90%) were placed through mobile phones and other connected devices.

It’s just a happy coincidence that we’re discussing this right around Super Bowl LV. By end of the game between the Kansas City Chiefs and Tampa Bay Buccaneers, an estimated 26 million Americans will have collectively bet $6 billion on the game – more through legal jurisdictions than ever before.

So-called “prop” bets allow gamblers to wager on just about anything… the number of interceptions thrown, the winner of the MVP trophy, even the opening coin toss.

It’s safe to say that sportsbooks around the country will be jam-packed with boisterous fans cheering or groaning every play. But far more will place their bets digitally and then watch from the comfort of their own homes. That would have been the case even without social distancing restrictions in the Covid era.

What does Wall Street see in terms of growth? Well, Bank of America analysts are forecasting the U.S. sports betting market to expand another 70% in 2021 as sporting events resume and new markets continue to open. As for revenues, Morgan Stanley is predicting the U.S. sports mobile gaming market to reach $12 billion by 2025 – a nearly ten-fold increase over 2019.

As with any rapidly growing industry, projections vary by source. The exact number isn’t terribly important. What is important is the number of zeroes – as in eleven.

Get A Piece Of The Action

As you might expect, dozens of companies are jockeying for position, triggering a mad scramble by casinos, software developers, and media brands to find dance partners.

— ESPN has affiliated with Caesar’s Entertainment on a multi-year marketing agreement.

Two of the biggest names in this space are DraftKings (Nasdaq: DKNG) and FanDuel. The two tried to join forces in 2016, but the merger was blocked by the Federal Trade Commission (FTC) on anti-trust concerns.

Draft Kings stock more than tripled in value last year – thanks in part to scorching 98% revenue growth last quarter. The company now has live mobile sports betting platforms in 10 states and is the official betting partner of Major League Baseball and the PGA golf tour. 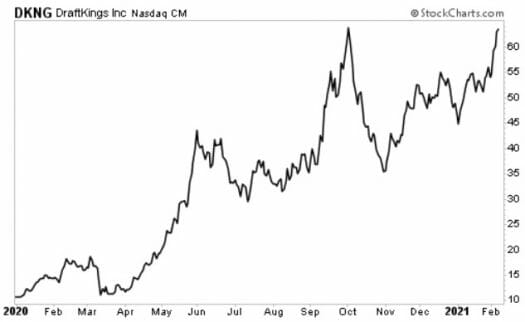 FanDuel was eventually gobbled up by U.K. gaming conglomerate Flutter, whose empire spans from the U.S. to Australia. The stock (which trades on the London Stock Exchange) has merit, but isn’t a sports betting pure play.

Regardless, it’s fair to say that none of this has escaped investors’ attention. In fact, a new thematic exchange-traded fund (ETF) has been created to profit specifically from this burgeoning industry. The Roundhill Sports Betting & iGaming Fund (NYSE: BETZ) has already attracted over $300 million in assets. The chart below says it all… 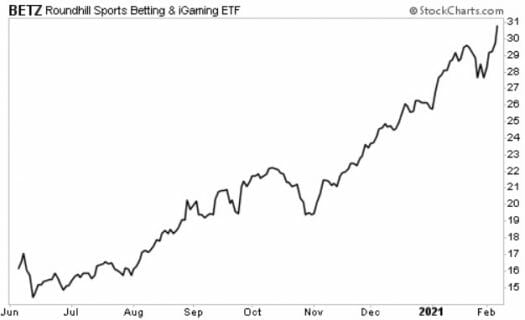 This fund is full of ways you can profit from this trend, which is still very much in the early innings. I’ve got a favorite, of course, but I won’t share it with you today out of fairness to readers over at my premium Takeover Trader service. (We just added the stock a little over a week ago – and we’re already sitting on an 18% gain, while the calls we added are up more than 50%.)

But the important thing to remember is that this trend is just getting started. So if you’re worried that you’ve missed out on the big gains, fear not. It may not always be smooth sailing, but there’s still time to get on board.

Editor’s Note: If you want to know what the biggest themes of 2021 (and beyond) are going to be, then you need to check out our latest report…

You’ll discover the shocking reason we believe violence in Peru could push one $2 stock north of $40… how a revolutionary breakthrough in air travel could make early investors rich… and the “odd” reason one small group of mining stocks could soar in the coming months (they’ve done it before – more than once).