The Most Important Number In Investing

Of all the information generated by the stock market, there are two pieces of data that I rely on more than anything else. They form the foundation of my Maximum Profit system – and it’s allowed us to reap gains of 64%, 120%, even as much as 183% over periods as short as a few weeks.

Today, I want to talk about just one of the data points that our system’s algorithm uses. It’s a piece of fundamental data that’s so important, but all too often ignored by most investors. In fact, I’d go as far as to say that if I could only look at one fundamental metric to find winning picks, this would be it.

The Most Honest Number In Finance

Many investors are already familiar with cash flow. But they may not realize just how important it is in relation to successful investing.

You see, cash flow is the only figure that a can’t be fudged with fancy accounting tricks.

All other figures that a company reports can be manipulated.

A company can inflate its earnings… report misleading revenue… but they can’t fudge the cash flow… the actual cold hard cash a company receives while doing business. 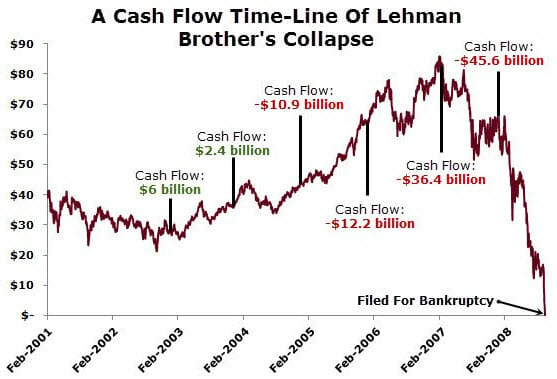 In the years leading up to the company’s collapse, the cash flow shriveled to zero and went into the negative. This alone was a huge red flag to any investor owning shares over that period.

The one thing Lehman Brothers and each of the other companies I mentioned have in common is that they were cooking the books.

They manipulated earnings… downplayed expenses… but they couldn’t fudge their cash flow figures: the actual money they were bringing in. It was the one thing that would have tipped you off to sell the stock fast. And it’s one piece of data every company generates that you can accurately rely on.

Now, knowing we can use this information to avoid losses is comforting. It greatly cuts unnecessary investment risk. But more to the point, cash flow is a key piece of data that our algorithm uses to identify winners as well.

Let’s dive a little deeper to see exactly what cash flow’s role is in spotting winning trades in the stock market.

I like to call cash flow the “most honest number in finance.” And as we talked about in the above Lehman Brothers example, it’s the lifeblood of any company. It has the innate ability to show you when things are starting to become dire at any firm.

Cash flow is the money a business uses to buy new factories, pour into research and development, or deliver back to its investors through dividends and share buybacks.

Think of it this way — if someone you knew earned $5,000 a month but spent $7,000, they’d be in bad shape. That negative cash flow would make paying bills extremely tough and building wealth next to impossible.

Compare that to someone who spends the same amount but brings in $20,000 a month. They have plenty of cash flow to not only meet their expenses, but also save, invest, go on vacation, etc.

It’s obvious who you would rather be.

There is much more to fundamental analysis than P/E ratios, earnings growth, and dividend yields. And researchers have found that cash flow is a much better indicator of future stock returns than income statement metrics like earnings. Detailed analysis shows that companies with more cash flow than earnings tend to perform better over a 12-month period.

In developing the Maximum Profit system, we rigorously backtested cash flow and found that based on this singular data piece alone, you could handily outperform the broader market. Time and time again, it identified trading opportunities.

How? It’s pretty simple. Our system scans through the market to find companies with sustained periods of rapidly rising cash flow – but the share price is only beginning to take off.

There’s a lot more to say about the system itself, but that’s beyond the scope of today’s article. But suffice it to say, if you’re not paying attention to cash flow already, then I highly recommend you start now.

I just released a special report about how we’re going to use our system to “hack” a group of stocks at the forefront of the 5G technological revolution. And we’ll do it using metrics like cash flow, which we discussed above — along with one other key technical indicator… If history is any guide, we’re going to make a killing on these stocks in 2021 and beyond…