The Simple, Secret Strategy That Builds Wealth In The Market

I don’t often talk about personal finance stuff in my premium newsletters. My job is to bring readers investment ideas. Ultimately, that’s what we’re all here for. But outside of just providing picks, my goal is to help you learn how to build wealth.

That’s what I want to talk about today. In fact, this could be the single most underappreciated secret to building wealth.

In just a second, I’m going to share how this “secret” strategy has the power to unlock amazing long-term returns.

And best of all, it’s so amazingly simple, anyone can do it.

But you might be slightly disappointed to learn that this “secret” is no secret at all. I’m talking about the methodical strategy of dollar-cost averaging.

Now, before you shrug this off and bail, hear me out…

I know dollar-cost averaging sounds uneventful, monotonous, and boring. That’s why it’s such an underappreciated investing strategy. It doesn’t provide the same thrill that investing in a small-cap company might bring, but it’s a great strategy that deserves more attention.

It’s also nearly stress-free and will pay off greatly in the long run. It’s even historically proven to create greater wealth than a standard buy-and-hold strategy. In fact, the numbers I’m about to share with you about dollar-cost averaging are mind-blowing.

First, let’s discuss the market’s historical performance. Now, the S&P hasn’t always been the S&P 500. The index started in 1926 with just 90 companies, expanding to 500 components in 1957. But it’s still a pretty good proxy for the overall “market”.

Since 1942, which is the last 80 years, the market has been up 64 of those 80 years including dividends (which I don’t know why we wouldn’t include those). 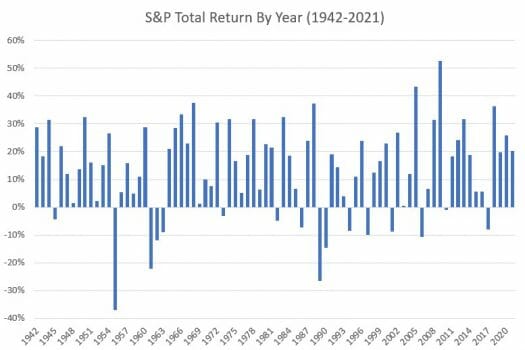 In other words, losing money in the stock market long-term is rather difficult. Really, the only thing that gets in the way is our emotions.

Stocks go down – the media is typically screaming that the world is about to end — and we sell our stocks. On the flip side, as stocks climb higher and higher, we get FOMO (“fear of missing out”) and begin buying. This emotional tug-o-war cripples our returns, impeding the magical wealth-building apparatus that is the stock market.

And it’s here where dollar-cost averaging can turn things around for us.

Keep in mind this is going to be one of the worst investment periods for stocks. You’re investing at the height of the dot-com bubble and then will suffer through the financial crisis in 2008. 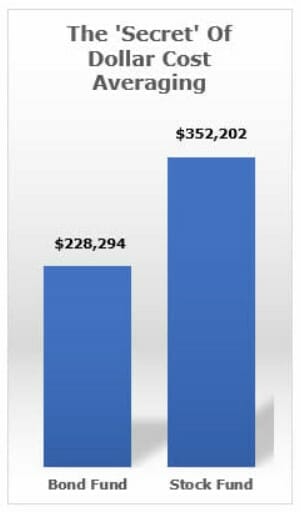 You have two investment choices.

I would venture to guess that given these choices most folks would invest in the Vanguard Bond fund. After all, both returned the exact same amount, yet, the bond fund didn’t have a single losing year, while stocks took you on an emotional roller coaster ride.

But again, this is where dollar-cost averaging really comes into play…

Taking It To The Next Level

Using an approach like this touches on a major facet of investing… our emotions. If the market tumbles and we have a systematic approach to building wealth in place, then our mindset goes from one of fear (which often leads to panic selling) to one of encouragement.

That’s the part about dollar-cost averaging that I really like. But you can take it even a step further. I’ll explain it like this…

Let’s say you own shares of a company that is creating some truly world-changing stuff… It could be a groundbreaking medical treatment, a new gadget that every consumer will want to own, you name it.

The point is, if it’s truly game-changing, then you don’t have to bet the farm on it right away. This is where a strategy like dollar-cost averaging really begins to pay off.

Think about it this way. If you were fortunate enough to own a stock with the truly game-changing potential of an Apple or Netflix, then we want to be in it for the long haul (obviously). And if a stock like this suffers a temporary setback, but the long-term picture remains in place, then we can rejoice instead of panic. We’re getting investments we want to own for less.

This gives us the chance to stay in the trade and have the opportunity to reap the amazing long-term returns that investments like this produce.

The point is, strategies like dollar-cost averaging allow us to focus on the bigger picture. Especially for those of us who want a chance to nab some truly life-altering gains from the innovation that’s happening around us every single day.

The list of game-changing opportunities never ends. In fact, in today’s environment — where information, ideas, and technology are spreading at the speed of light — I think the opportunities are greater than ever. Think of everything we know today that has changed over just the course of a few years… I’d bet you wouldn’t have thought half this was possible a little more than a decade ago.

Our entire goal with this report is to uncover select opportunities that could become life-changing investments. Of course, to identify a groundbreaking idea, you have to be forward-thinking… and you have to go out on a limb.

Now, I want to make one thing clear. We don’t have a crystal ball. Some of the stocks we talk about may lose money. That’s part of the deal with this business. But if we can carefully allocate some cash into a few life-changing ideas before they become household names, then the returns should more than make up for the ones that don’t pan out.

That’s especially true when we practice a little dollar-cost averaging. It keeps our emotions in check, allowing us to remain patient, cutting the losers, and riding the winners over time to enjoy a massive windfall.

To learn about my latest set of investment predictions for 2022, go here now.