Growth And Inflation Worries Are Starting To Weigh On The Market

Yesterday was another down day for the market. That marks the sixth straight session the S&P 500 has lost ground – the longest losing streak in over a year. The tech sector has borne the brunt of the selling pressure, with the Nasdaq retreating by 7%.

So what’s going on? Ironically, we have a strengthening economy to blame.

Thanks in part to the vaccine rollout, GDP forecasts have edged higher. Bank of America just bumped its 2021 growth outlook from 6.0% to 6.5%. Goldman Sachs sees an uptick of 6.8% on the horizon. That optimism has started to inflate bond yields, which in turn will raise borrowing costs for consumers and businesses.

I rarely talk about Treasury Bonds outside of the pages of my High-Yield Investing premium service. That’s because it’s not exactly the most exciting thing to talk about. But it is important, so it’s worth touching on briefly today.

As you may know, the yield curve has been relatively flat in recent years. It’s even flirted with inversion at times, where shorter-term security yields exceed those on longer-term securities (often a harbinger of recession). But that’s not the case today. As the economy kicks back into gear, the curve has finally begun to steepen.

Yields on the 10-year note have been climbing faster than those on the 2-year. As you can see from the chart below, the once-minuscule difference between the two has expanded to 101 basis points — over a full percentage point. It might not sound like much, but that’s actually the widest spread since the summer of 2017. You can see what I mean in the chart below… 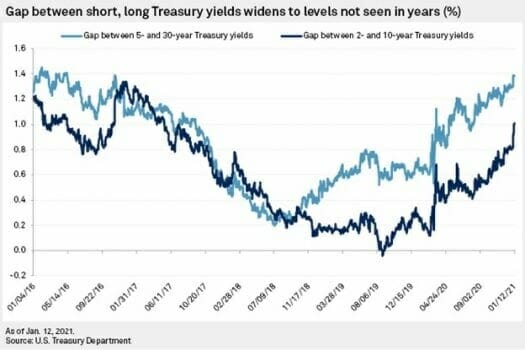 What’s causing that gap? Well, the Fed is doing everything it can to keep money cheap. The central bank is pouring $120 billion per month into short-term instruments and keeping the fed funds rate pinned down at close to zero. Analysts aren’t anticipating a rate hike until 2024. But longer-term bond yields (which are market-driven) have been climbing.

This widening yield curve is a welcome development for banks, as it expands lending profit margins. The Financial Select Sector SPDR (NYSE: XLF) has continued to rise in this selloff and just touched a new all-time high. 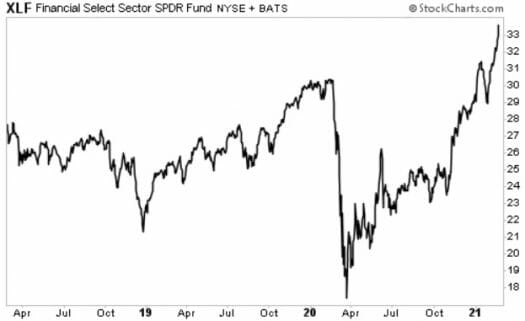 But few other businesses see the prospect of higher rates as a positive. Interest expenses will start to take a larger bite out of the bottom line, particularly for those with more leveraged balance sheets. Growth projects may have to be scaled back or scrapped. And the wave of debt-financed stock buybacks may have crested.

Inflation expectations have also begun to weigh – but we’ll save that discussion for another day. (In the meantime, my colleague Amber Hestla wrote about it here. And over at our sister publishing arm, my colleague John Persinos shared emails from concerned readers in this piece.)

Expect to see more emphasis in the coming weeks on cyclical sectors that will benefit from the $1 to $2 trillion stimulus package that Congress is hammering out. I’ve also become more bullish on industrial metals and other commodities, which could soon be jolted by increased government spending on green energy.

In the meantime, if you’re looking for more ways to earn income in this market, then you’ll want to check out the latest from my colleague Amber Hestla…

She’s telling her readers how a 16-digit “pin code” can unlock instant payouts for investors week after week. Once you see how this works, you’ll be shocked that more investors aren’t using it to make extra cash — it’s that easy.