I may never go on another vacation again…

Two years in a row now I’ve headed out of town for a little vacation at the end of February when all hell broke loose in the market.

Last year, I was in Mexico when the market began to drop on February 25. The market continued its descent as Covid-19 came in like a wrecking ball, causing havoc on not only the market but businesses and our lives.

By the time I got back to my desk, the S&P 500 was down about 12% and would go on to tumble 34% in total in just four weeks. The fastest market plunge in history. 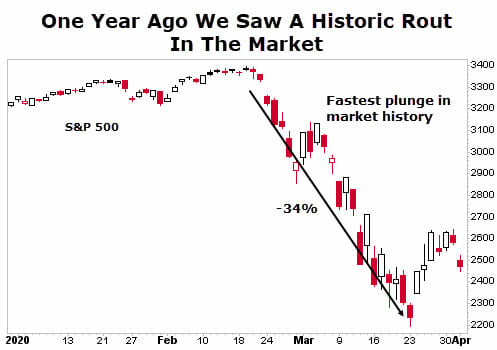 This year, I ran up to the cabin to enjoy a little fun in the snow before heading south to Arizona. And when I got back, the market had already begun breaking lower.

Now, I’m not saying this downturn will be like last year’s. In fact, far from it. I’m even a little excited by it. To understand why, let’s review what’s happened so far…

Since peaking in the middle of February, all three major indexes have seen some big one-day moves and traded lower.

Over at Maximum Profit, our portfolio is getting hit a bit harder because we have a considerable amount of exposure to the tech industry. (I’ll explain why I’m not too worried in just a minute.)

If we take a look at the tech-heavy Nasdaq, it’s pretty much in correction territory, which is defined as a pullback of 10%.

It closed down today 9.4% from its February high. 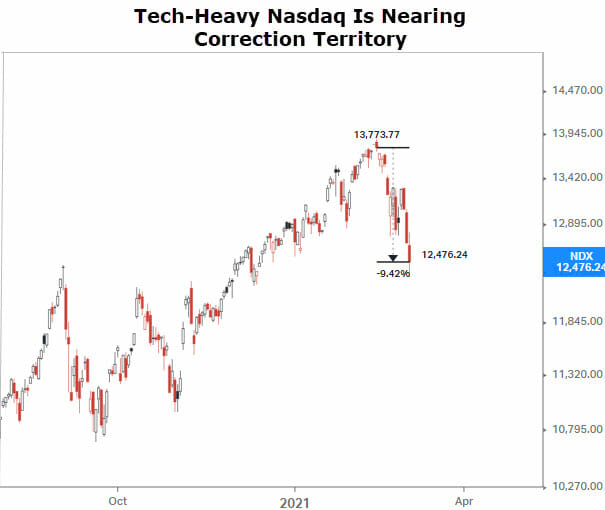 I know it may be hard to believe, but market corrections are a good sign. It’s a sign of a healthy market. What we saw after March of last year was abnormal.

When stocks start to tumble, most investors get nervous. Emotions begin to take over and it clouds their judgment. Don’t let the market’s gyration rattle you. I recommend having a system in place with strict buy and sell signals.

Keep this in mind, some of our best trades over at Maximum Profit have happened in the middle of market corrections and pullbacks.

For instance, last year when the market had plunged 30%, I recommended DocuSign (Nasdaq: DOCU) on March 20 — the bottom of the bear market. Of course, the timing was pure luck. But nonetheless, folks who were brave enough to wade back into the market saw their shares of DocuSign double in just three months. 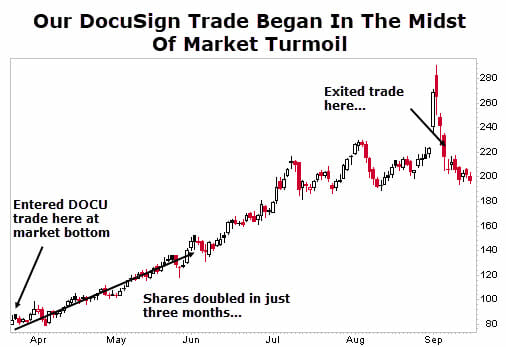 Either way, we’ll trust our system to continue delivering buy and sell signals. For example, during my time away, we had three holdings hit their respective profit targets — our signal to take a little bit off the table.

The first, an energy stock, inched past our first profit target for a 25% premium over our entry price. The next was a retailer that reported excellent earnings. It cruised past our first profit target and nearly hit our second target on the same day. Finally, there was our financial stock that blew past two of our targets — shares have climbed 50% since we added the stock to the portfolio in December.

During this same period, we had one holding fall below our trailing stop-loss price. The short-lived trade lost us about 20%. But it’s always better to cut our losses here, preserve capital, and move on.

Three out of four ain’t bad.

The point is, don’t fight the trend, and don’t let a small loss turn into a big one. If you have a proven system in place, you should be able to sleep better at night when the market takes a quick turn like it seems to be doing now.

Now, whether the market resumes its bullish momentum next week is anybody’s guess. But I will say this… My personal portfolio has slid 10% from its high last month. But I’m not running for the exits. In fact, because I’ve pulled profits at my profit targets and cut losses short, I have dry powder on hand that I’m excited to put to work.

Thanks to the Maximum Profit system, my readers and I can feel confident that the stocks we find will be winners more often than not. Why? Because our track record speaks for itself.