The Streaming Wars Heat Up Even More. Here’s What You Need To Know…

When he was five years old, his uncle ran a wire from the family home to the top of a nearby hill, connecting it to a free-standing antenna. When the television flicked on, it was a magical moment. All of a sudden, distant worlds like New York City were on the screen. He was immediately captivated by the images on the television, and how they connected his rural home to the outside world.

Little did Hendricks know that this was just the beginning of his path as a pioneer in the media market.

Of course, Hendricks didn’t take the normal route into the media world. In fact, his first job out of college was as a fundraiser — helping schools snag grant money. He was so successful that he launched his first business, a newsletter, to help clients figure out how to get funding from the federal government. And he likely would have remained down this path had a friend not asked for his help. A theological professor needed help distributing a video series called “The Children of Abraham.”

Unfortunately, Hendricks couldn’t find any takers. But instead of being disappointed that he didn’t succeed, he saw the failure as a wonderful opportunity. Young and naïve, Hendricks realized that there weren’t any cable channels devoted to documentaries and nonfiction programming — something he loved. After all, he was a history major.

One of his jobs on campus while in school was to supply professors with 16mm films to supplement classes. One of the classrooms was filled with nonfiction fare from the BBC and other distributors. He knew the content was there, it was just simply relegated to classrooms.

His goal was to get that content on television available for everyone’s viewing. So, he launched his second business and called it “Discovery.”

The Birth Of A Media Empire

He called up the one person on television he knew was interested in nonfiction programming: Walter Cronkite. Surprisingly, the legendary news anchor invited him to New York for a chat. The meeting went so well that Cronkite made several calls and even wrote a letter of support.

After hundreds of “No’s”, Hendricks was finally able to land a backer in investment firm Allen & Co.. This meant he was able to finally get some traction with cable operators. However, Hendricks quickly burned through his initial funding, and a promised follow-on investment had fallen through. He and his wife had borrowed everything they could against their credit cards and mortgage.

The bills mounted and it looked like this could be the end of Discovery. But cable pioneer John Malone stepped in and threw Hendricks a lifeline. Malone was trying to build his cable empire and needed content. Hendricks’ nonfiction-TV fare seemed like a good addition to the lineup.

On June 17, 1985, the Discovery Channel debuted to 156,000 subscribers across the United States. The company went on to become a staple in television packages. It later acquired The Learning Channel (TLC), launched Animal Planet, and today owns many well-known brands including HGTV, Food Network, Travel Channel, and Motor Trend.

The Streaming Was Are Just Beginning…

It recently joined the “streaming wars” with the launch of Discovery+ Streaming on January 3, 2021. The company announced that it already has 11 million subscribers — no doubt that the popular Chip and Joanna Gaines remodel makeover show,” Fixer Upper,” which relaunched on the new service, provided a nice boost.

As you can see in the chart, it’s been on a heck of a run… 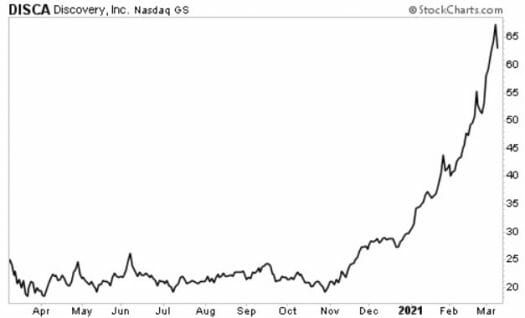 The cord-cutting revolution is well underway, and companies are feverishly looking to get a cut of the pie. But despite the rise in streaming, the industry is still in its relative infancy.

I’m a fan of Disney and it’s been on my shortlist for stocks to add to the portfolio. The company has a slight advantage in that it already owns a bundle of content, plus it also owns Hulu and ESPN. But the stock’s recent ascent has me waiting for a better entry point.

Another one of my favorite streaming companies is one I profiled in one of my premium reports for Top Stock Advisor readers. The company is FuboTV (NYSE: FUBO) – and it specializes in sports streaming. But since I published that report, the stock has been on a tear — up 48% since January.

Over at Top Stock Advisor, we’ve been following the “streaming wars” closely. At this point, DISCA may still have some upside, but it’s not a sure thing. There’s a lot of competition in this market.

With the recent selloff in tech and “stay-at-home” stocks, now may be a good time for risk-tolerant investors to get in on FUBO. Not to mention, over at Top Stock Advisor, we recently pulled the trigger on John Hendricks’ latest venture. But there’s another company that I’ve been keeping my eye on that I’m even more excited about…

That’s because it’s poised to come out a winner no matter who wins the “streaming wars”. In fact, this pick is involved in a much bigger war that’s just getting started.

Just a few weeks ago, I said something that I really want to sink in: “…in the same way every company today is a technology company, the companies of tomorrow will be space companies in one way or another.”

Why do I believe that? Don’t just take my word for it. Everyone from Elon Musk to Cathie Wood and more is putting their money into space in some form or fashion. And this pick has an ace up its sleeve that could lead investors to major profits in the months ahead…

I’ve got all the details in my latest research. You can go here to learn more now.