If you’re one of the millions who have braved the lines and got your vaccine after signing up, I wouldn’t blame you if you let out a sigh of relief.

It’s been a long road for all of us. And everyone’s story is different. But now, things seem to be looking up. Maybe you’re considering going out to eat a little more now. Or perhaps taking in a movie or concert. Or maybe you’re thinking of taking a little trip.

My wife and I are doing just that here in a couple of weeks, as a matter of fact. We’re headed to Costa Rica, where the beaches are sunny and the restrictions are minimal.

We all have our own choices to make. But you get the sense that we’re closer to the end of this thing — and boy, is it ever going to be something when we’re there.

Meanwhile, Americans are reportedly sitting on a record $2.4 trillion in personal savings. Considering that consumer spending has been responsible for more than two-thirds of GDP growth since 1990, that’s kind of a big deal.

When you think about it, it makes perfect sense. When times are tough, people tend to hold on to their wallets a little tighter than usual. Throw in a global pandemic, and most of the country in lockdowns from the better part of a year, and this is what you get.

But now we’re in a situation where the country is opening up. People are getting vaccinated. More are feeling comfortable getting out. And this new round of stimulus checks has got to be burning a hole in the pockets of a lot of Americans.

We’ll get to one way you can profit from this in just a second. But first, my colleague Robert Rapier just gave some good, common-sense advice about those stimulus checks that you need to hear.

Some Good Advice You Need To Hear

His advice is simple: if you have debt, use that money to pay it off before you go looking at the stock market.

I know, not very fun to read, is it? But before we get to dessert, we have to eat our vegetables. And regardless of your financial situation, it’s a good reminder for all of us. Here’s what he had to say…

I have several rules for wealth-building that I spelled out in 7 Steps For (Nearly) Effortless Wealth-Building. The second step is “Eliminate any high-interest debt.” Before putting any money to work on investments, and especially before engaging in any frivolous or unnecessary spending, you should direct that stimulus money at servicing your debt.

As Robert points out, you won’t find a guaranteed 14.7% return anywhere in the stock market. The long-term rate of the S&P 500 is only about 9%. So the math here is pretty simple on this one. If the average family of four getting the full stimulus payment of $4,200 put that towards high-interest debt, it would be wipe out the average credit card debt.

Sadly, most people won’t follow this advice. So if you find yourself in this spot, dare to be different. You’ll thank yourself later.

Okay, now for the fun stuff…

High Savings + Pent-Up Demand: How You Can Profit

All of this money piled up, plus all the pent-up demand that’s built up, means only one thing: we’re about to see a personal spending boom.

This is one of the reasons why my colleague Nathan Slaughter is still a firm believer in the “re-opening” trade. The problem is, it’s getting harder and harder to find plays that haven’t already shot to the moon. For example, Hilton (NYSE: HLT) is trading at higher levels than it was pre-Covid.

Still, Nathan believes there is life remaining in a few plays. For example, over at Takeover Trader, Nathan recommended Trip Advisor (Nasdaq: TRIP) back in June of last year. Here’s what he had to say about the online travel booking portal just recently…

With billions in shareholder capital rotating out of tech stocks and into leisure/entertainment, the travel sector has been good to investors lately. TRIP is no exception. The stock has soared 100% year-to-date, doubling from below $30 to $60 before sliding on profit-taking the past few days.

The rapid deployment of Covid vaccinations deserves some of the credit… [But] American Express notes that travel and entertainment category spending among its card members has now exceeded pre-Covid levels for the second straight quarter.

As more vacationers hit the road (or the skies), stocks like Airbnb (Nasdaq: ABNB) have rallied sharply. But TripAdvisor has helped its own cause with the introduction of a premium new subscription service that runs $99 per year – a bit like Amazon prime for travelers.

Dubbed Tripadvisor Plus, membership in the special club comes with a host of perks and discounts… Hotel partners are incentivized to join the platform as well through increased visibility and decreased third-party commissions.

This service could pay for itself after only a few bookings, making it quite appealing to anyone who travels frequently (TRIP’s core audience). Wall Street has given the plan a standing ovation. Citi believes it could ultimately attract 10 million subscribers – generating $1 billion in incremental annual revenue.

As Nathan points out, this is huge. Despite averaging 400,000 visits from users per month, most of the company’s $1.6 billion in revenue last year came from advertisers. This new program will serve to monetize some of that traffic. This helps set TRIP apart from a lot of the “reopening” plays… Sure, it will benefit from a “return to normal” – but it’s also taking active steps to make more money. Analysts seem to agree, which is why they’ve been upgrading the stock.

All told, Nathan and his subscribers are up an incredible 173% since he first recommended TRIP. 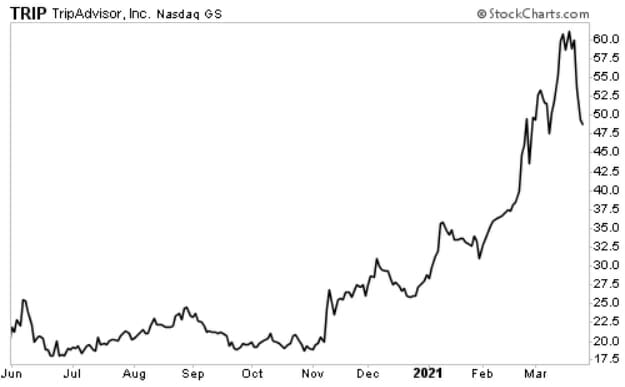 Although Nathan recently put in a protective stop-loss in place to preserve those gains, there may still be some life left in this trade after the recent pullback.

Either way, we’ll have more to say on the potential spending boom in the coming weeks as things develop further.

In the meantime, my colleague Jim Pearce has found what he’s calling the “Tech IPO Retirement Stock”…

It’s happened before – just ask anyone who moved early enough on any of the well-known FAANG stocks before they were the giants they are today. And it’s exactly what could happen to you if you follow Jim Pearce’s simple trade. Click here for details.