This Tech Data “Landlord” Is Still A “Buy”

It’s pretty easy to sum up the market thus far in 2021. Whatever worked in 2020 is now struggling, and whatever struggled in 2020 is now working. That may be an oversimplification, but it’s not far off.

Case in point, over at my High-Yield Investing premium service, we added ConocoPhillips (NYSE: COP) to the portfolio in the depths of the Covid-19 selloff. We locked in a 6% yield-on-cost, and shares enjoyed a nice initial rebound — only to languish through most of 2020.

After flipping the calendar, COP has finally kicked into gear, soaring from the upper-$30s on January 1 to the mid-$50s today. 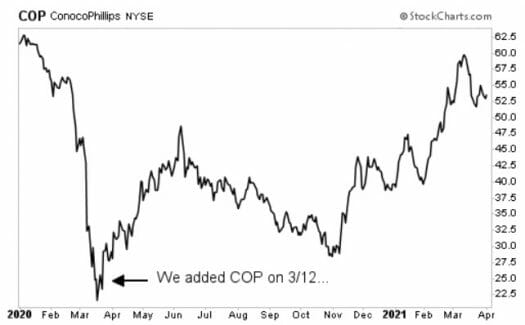 I could give you a few more examples, but you get the point.

On the flip side, many leaders have become laggards, most notably in the tech sector. But I wouldn’t write off the sector completely – because a few names that have sold off are really more tech-adjacent than tech per se.

For example, Coresite Realty (NYSE: COR), another one of our holdings, isn’t really a tech company. It’s more of a property owner. But it does lease space to outfits like Amazon and Google. In any case, the stock has been in a funk lately, sinking more than 15% from its recent peak. 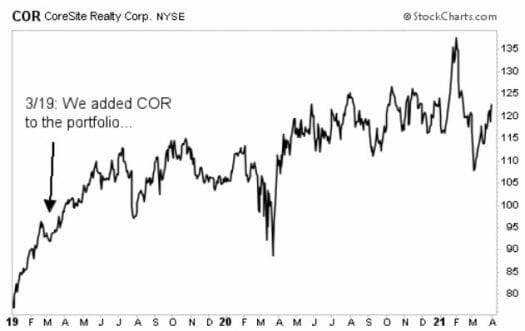 I’m not worried about this one. Here’s why…

CoreSite owns two dozen high-performance data centers that house 1,400 corporate tenants, including heavyweight enterprise clients like Wal-Mart and massive network providers such as AT&T. Once their hardware has been installed on these campuses, renters are reluctant to move – and not just because of the hassle and expense. They often make connections with neighbors. Plus, every minute of website downtime can mean millions in lost revenues, so companies are reluctant to do anything that could disrupt network availability. That switching cost can be a powerful competitive advantage for incumbent leaders like COR.

CoreSite renewed 260 leases last quarter and saw little customer attrition (or “churn”). Equally important, it signed 150 new (and expansion) leases involving 54,000 square feet of space. Despite the pandemic, it was a record year for small-scale leasing activity to smaller tenants.

That demand from new and existing tenants helped absorb 192,000 square feet of increased capacity that were placed into service during 2020. New leases commenced last quarter will generate $20 million in incremental annual rental income over the next 12 months (an average of $187 per square foot).

As it stands, CoreSite is now collecting over $650 million in yearly revenues and producing $5.50 per share in Funds from Operations (FFO). Both figures advanced in the mid-single digits last year and are expected to show modest increases in 2021.

That will widen the distribution coverage on this high yielder to 112%.

Some of the names that have sold off in tech were clearly trading for high valuations, so a bit of a pullback is understandable. But I’m confident in the prospects of COR.

CoreSite, meanwhile, has leveraged demand from colossal cloud storage providers and other customers into 800% dividend growth over the past decade.

Aside from COR, the larger point is that there are plenty of high yields out there for investors – you just have to know where to look. If you’re tired of settling for the paltry yields offered by most stocks, then my staff and I are here to help you along…

If you’d like to see how High-Yield Investing can help you pull in double-digit yields — and earn some impressive capital gains to boot — go here to read this report.