In A Wild Market Like This, Here’s How To Protect (And Profit…)

The S&P 500 breached the 4,000 mark for the first time in history. Meanwhile, the Dow Jones Industrial Average is also hitting new highs and is the top-performing major index so far this year — up 8.3%. That tops the S&P 500’s performance of 7% and the Nasdaq 100’s 3.4% year-to-date returns.

If you simply glanced at the strong returns from these indexes, you might glean that it’s business as usual in the markets and stocks just keep climbing.

But in reality, these returns don’t reflect the craziness of what we’ve witnessed so far this year. Let us not forget that just a few months ago we had the “Wall Street vs “Reddit” battle that saw shares of GameStop (NYSE: GME) go from near bankruptcy to more than $400 a share.

Other stocks were swept up in this craze to squeeze short-sellers, too. Case in point, one of our own former holdings over at Maximum Profit, Nokia (NYSE: NOK). Shares went from just over $4 per share when I recommended the stock in January to over $9 a share a few days later. 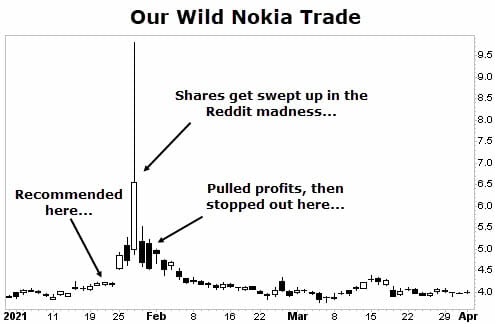 Even if you didn’t get out at the very top, this still turned out to be an excellent, quick trade. We made 36% in just four days. A few lucky readers even told me they made anywhere from 70%-100% in just a couple of days.

After the GameStop news became stale, we had a big rotation out of tech stocks. This caused the tech-heavy Nasdaq to fall into correction territory — defined as a pullback of 10%. Tech stocks have continued to see heavy volatility. Of course, the tech fallout has brought all sorts of critics out to bash people like Cathie Wood, whose popular Ark exchange-traded funds (ETFs) had an outstanding 2020.

Funny how quickly the media and people will turn their backs on someone.

Then just recently we had the mother of all margin calls.

Shares of ViacomCBS (Nasdaq: VIAC), which had been on a tremendous tear, came crumbling down. The company announced it would raise $3 billion of new capital through the issuance of $2 billion in common stock and $1 billion in convertible preferred stock.

Now, it’s pretty common for stocks to fall after a company announces it will issue more shares. After all, it dilutes shareholder earnings. But it’s not common for a large company like ViacomCBS to plummet by nearly 50% on the news.

Well, we later found out that the exacerbated selling was because of forced selling (margin calls). It turns out that Bill Hwang’s family office, Archegos Capital Management, was the seller of large amounts of the stock, along with Discovery (Nasdaq: DISCA), which fell significantly.

Rumors have it that the family office has about $10 billion to $15 billion in capital, and it leveraged those funds roughly five to one. That is huge. This would imply that the fund could be behind as much as $50 billion to $100 billion of equity selling pressure.

When you’re highly leveraged and things go south, your broker makes you put up more collateral to cover your positions. A good way to think of this is the mortgage on your house. Say the bank that holds your mortgage requires you to have at least 20% equity in your house at all times. So if you’re house was worth $500,000, then your mortgage couldn’t creep above $400,000.

Well, something happens (like the financial crisis), and all of a sudden your house is worth much less. Say home prices fall 30% and now your house is now only worth $350,000 –but you owe $400,000 because that was the minimum requirement when your house was worth $500,000.

If you don’t have $120,000 in cash to meet the requirement, then you have to sell. Of course, banks don’t require this to be the case always, but when it comes to stocks, your broker does. So, when the value of your stocks go down, you need to put up more cash to keep that margin balance in check.

If you can’t do that, then the broker will automatically begin selling your positions, until enough cash is raised.

What We Can Learn

This is what happened with ViacomCBS and a handful of other stocks. 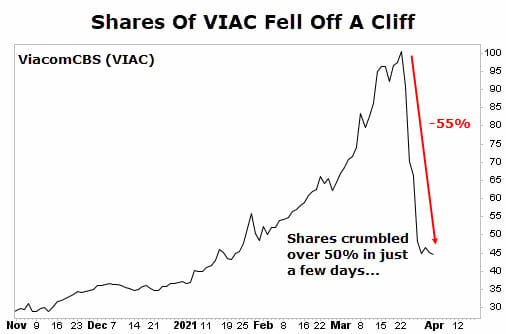 As you can see, shares fell off a cliff. In the middle of March, shares reached new all-time highs. Two days later it was down 30%, and in two more days down over 50%. That’s gut-wrenching.

This is pretty incredible since we’re not talking about some small-cap penny stock. This is, or was, a company with a $60 billion market cap.

So again, on the surface, one could look at the markets and think they’ve quietly had a good start to the year. And they have. But it’s been anything but quiet.

ViacomCBS provides yet another good example of why it’s so important to follow your sell signals. And if you’re not using sell signals, then I recommend you start doing so.

In the case of VIAC, had traders exited the day after shares closed down 30% from their highs, they would have suffered a loss of about 33%. But had they waited it out, hoping for a small rebound would now be sitting on a massive 50%-plus loser. That’s tough to come back from.

As I like to say, investors tend to focus on only half the battle — what to buy and when. But what to sell and when is arguably just as important.

That’s why it helps to have a proven system in your corner — and that’s exactly what we have over at Maximum Profit. By exploiting a market “anomaly”, we’ve been able to identify triple-digit wins in any market. All you have to do is follow the system’s buy and sell signals.

Go here to check out my brand-new report on this “anomaly” now.