Most consumers seldom think about how all those blue jeans and washing machines and lawn mowers end up on store shelves… that is, until something disrupts the supply chain. Fresh off memories of empty grocery store shelves in the wake of Covid-19 last year, the world got a reminder of just how complex and precarious the business of getting things to where they are going can be.

I’m talking, of course, about the unfortunate grounding of the Ever Given cargo ship last week. The massive vessel (which is 1,300 feet long and capable of carrying 20,000 shipping containers) ran aground last Tuesday, blocking passage of the Suez Canal. Like a one-car accident on a busy interstate, traffic backed up for miles and came to a standstill. Keep in mind, 50 ships transit the canal on a normal day, hauling approximately $9 billion worth of goods.

The vessel is free now. But for a few days, a containership made frontpage headlines and became the star of the internet. This incident was also an important reminder that shipping is the backbone of global trade – impossible without all those stackable metal boxes that safely transport products from port to port.

As you can imagine, seaborne trade is a big business. It can also be a hugely profitable business — and one that you can profit from…

How To Profit From Global Trade

With a fleet of 7 million twenty-foot equivalent units (TEUs), Triton International (Nasdaq: TRTN) is the world’s largest renter of shipping containers. It leases to carriers from 237 locations in 59 countries and controls about 30% of this lucrative market. And right now, business couldn’t be much better.

Global trade (as measured by port throughput volume) has rebounded much faster than expected and now exceeds pre-pandemic levels. The numbers would be even higher, but the lack of container availability has formed a bottleneck. Many shipping lines just don’t have enough boxes to fill. Even with manufacturers bumping up production, the inventory of new containers is low and factory space is tight.

So instead of buying new equipment, shippers are leasing.

But most lessors are almost fully booked now and leasing inventories are near historical lows. Since last July, Triton has supplied 1.3 million TEUs and seen its fleet utilization rise to 99.1%. With supply shrinking and demand rising, prices can only go one direction – leasing rates have moved sharply higher. Sales prices for used containers are also skyrocketing.

All of that translated into hefty profits of $115 million last quarter, or $1.70 per share. That’s an increase of nearly 50% from a year ago – and a new company record.

When the market was slow during the quarantine, Triton diverted cash into dividends and buybacks. With conditions heating up, management is taking advantage and has plowed $1.7 billion into new containers to expand its rental fleet. Most have already been booked and will be delivered over the next six months.

It doesn’t hurt that Triton is the No. 1 supplier to 7 of the world’s top 10 shipping lines.

How long will these boon conditions last? That’s difficult to say. But Triton expects the financial rewards to be “durable” since the average lease duration for new containers going on-hire is 10.1 years. The lofty return on equity (22.9%) we saw last quarter could be sticking around for a while, and last year’s record earnings are expected to strengthen even more in 2021.

In the meantime, we’ve done quite well with TRTN since adding it to the High-Yield Investing portfolio in November of last year — more than doubling the performance of the S&P 500. 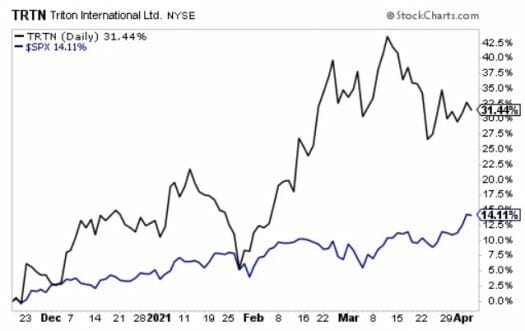 And after more than doubling over the past 12 months, TRTN is still undervalued. So while you may have missed out on the initial run-up, TRTN could easily reach the mid-$60s.

We’re earning a solid 4% yield on this position right now, but with record cash flows, clear earnings visibility and lower debt leverage, I think we will see another sizeable dividend hike this year.

If you’re interested in profiting from a “return to normal” with global trade, then TRTN is worth a look right now.

As I always tell my readers, the high yields are still out there. You just have to know where to look — and my staff and I are here to help you along…

If you’d like to join us in our search for the best high yields the market has to offer, then I want to invite you to learn more about High-Yield Investing.

Go here to check out my latest report and learn more.