The Key To Finding Big Winners In Any “Gold Rush”

Everybody loves a good “cocktail party” stock – that little-known company on which you recently took a flyer, the one they told you would become the “next Amazon” and make you a fortune in the process. The type of long-shot play that piques the interest of those around you.

Not that there’s anything wrong with that, of course. Even as a former advisor, I think it’s just fine – maybe even prudent — to occasionally swing for the fences, as long as you allocate your funds appropriately. Keep in mind, though, that these highly speculative trades are just that: speculative.

But that doesn’t mean we shouldn’t try.

I’ve built a pretty good track record of finding these sexy, little-known, cocktail party stocks over the years. And it’s because I’ve learned (the hard way) the key to finding the ones that have the best chance of delivering big wins. In fact, I’ll tell you about one in just a moment.

The beauty is that it isn’t some fly-by-night company. It’s a firm that provides us with a much better opportunity of making money on these more speculative types of investments. And to understand why, let’s go back to the 1800s…

Learning From The California Gold Rush

After an estimated 300,000 prospector wannabes stormed California in the mid-1800s in search of gold, most never hit paydirt. Yet, one group of savvy entrepreneurs made money regardless of whether the miners struck gold. I’m talking about the folks who sold them the tools of the trade… the picks and shovels.

And I think that’s one of the best approaches — the “picks and shovels” tactic — for finding that golden needle in the haystack.

It’s a simple approach that has yielded big results…

In early 2014, for instance, payment technology was all the rage. We had Apple Pay, Google Wallet, PayPal, and ISIS Mobile Wallet all vying for supremacy. With the use of near field communication (NFC), all it took was a simple tap of the credit card or mobile phone to pay for purchases.

While the biggest focus was on Apple Pay and Google Wallet, folks who dug a little deeper found an even better play with “picks and shovels” supplier NXP Semiconductor (NXPI), which was providing the NFC technology to Apple and other companies. In the 13 months ended in May 2015, shares of this under-the-radar company more than quadrupled, crushing the market and outperforming Apple and other big boys in the process. 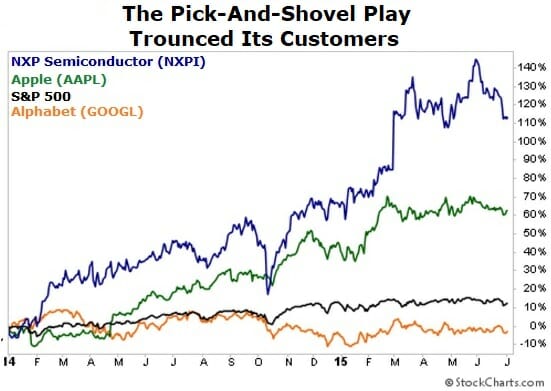 The beauty of this strategy is that it works in nearly every industry. I’ve had success with it in the energy market, healthcare, technology — you name it. In each instance, I’ve dug a little deeper to find one of the main suppliers feeding whatever boom was underway at the time.

The Picks-And-Shovels Play For Big Pharma

Catalent (Nasdaq: CTLT) is a company that most people likely haven’t heard of. Yet, it’s a firm that’s had a hand in nearly half of the new drug products approved by the U.S. Food and Drug Administration (FDA) over the last decade.

It works with healthcare industry stalwarts such as Pfizer, Johnson & Johnson, GlaxoSmithKline, Novartis, Roche, and AstraZeneca – all of which are customers.

You see, Catalent works behind the scenes for large biotech and pharmaceutical companies to provide and/or develop biologics (a product derived from living organisms) and consumer health products. The firm’s deep expertise in product development helps its customers take products to market – read, make it through the three-phase FDA approval process — faster.

Annually, Catalent produces roughly 73 billion doses for nearly 7,000 customer products. Put another way, Catalent has a hand in one of every 20 doses of such products taken each year by patients around the world.

As I mentioned, Catalent’s key customers include some of the biggest drug-makers in the world. And when you’re investing in a “picks and shovels” company like Catalent, it doesn’t really matter which pharmaceutical company comes through with the next blockbuster vaccine or drug.

This is especially true when it comes to the vaccines for Covid-19. For instance, Moderna (MRNA) has tabbed Catalent to help with its Covid-19 vaccine. Catalent will provide vial filling and packaging capacity, as well as clinical supply services.

Moderna isn’t the only company collaborating with Catalent. In June, Catalent and AstraZeneca (AZN) formed a partnership for similar services — vial filling and packaging — as well as preparing for large-scale commercial supply of the University of Oxford’s adenovirus vector-based Covid-19 vaccine. 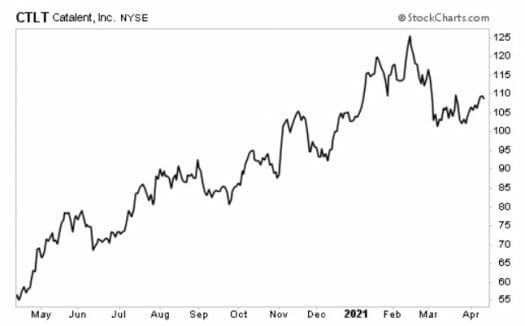 As you can see from the chart above, shares of CTLT have had quite a run over the past year. And I think they may still have some life left after the recent pullback.

But the larger point is that this is a prime example of why “picks and shovels” plays are worth the effort. Stocks like Catalent are in sort of a “sweet spot” for big trends like the Covid vaccine race (or drug development in general).

While it isn’t a household name, neither is it a penny stock. It’s an established company that generates more than $3 billion in sales annually (fiscal 2020 figures), and it’s growing that figure at a fast clip. When the company reported its fiscal 2020 results in August, sales were 23% higher than the previous year. Operating income for the quarter jumped 30.6% year-over-year, and it generated $173 million in profit.

Regardless of who wins out on the vaccine front, Catalent should benefit one way or another.

Whether it’s gold in California or vaccines in a global pandemic, it pays to look beyond the usual players. Find out who stands to benefit no matter what, rather than trying to pick individual winners.

And even better, hardly anyone is talking about it right now. In fact, I doubt it’s even on Wall Street’s radar. But that may change very soon…

You see, I found a tiny (but massively important) detail buried in this company’s filings that could lead to a windfall in the coming weeks.