Remember the ship that I wrote about two weeks ago? The one that was stuck in the Suez Canal, blocking some 350 freighter ships from traversing one of the world’s key shipping lanes?

Just kidding. Of course you remember. It seemed like it was all the news could talk about for days. Someone even made a very specific website dedicated to answering the question “Is the ship still stuck?” (Answer: “No!”)

As noted by the website, the Ever Given is no longer still stuck. It has been freed from the Suez Canal, and the backlog of shipping is cleared.

But that doesn’t mean we shouldn’t still be worried about shipping. Looking at the chart below, we can see that the costs of shipping are rising. This is a chart of the Baltic Dry index, an index based on shipping costs associated with placing goods on large ships like the one that got stuck. Higher prices are an indicator that demand is increasing for shippers.

While shipping costs have already climbed more than 440% above 2020 lows, there is significant room for further increases. The next chart shows that the Baltic Dry Index is more than 80% below its 2008 high. Shipping capacity is important to global trade. A lack of transportation capacity could constrain output, or it could lead to inflation.

There are signs that shipping capacity has been weighing on the economy for some time. According to analysts with Wells Fargo…

“Even before the recent six-day blockage of the Suez Canal, congestion at the ports of Los Angeles and Long Beach, which together account for a third of U.S. container imports, caused container ships to anchor offshore while waiting for available port space.

Even when ships are docked and unloaded, port executives report higher than normal container dwell time, or the time it takes importers to pick up their cargo from port. This echoes the long supplier delivery times reported by U.S. purchasing managers in the recent ISM surveys. The knock-on effects from longer dwell time also causes a delay in the return of containers back to port, which then constrains exports.”

But early reports show those issues are already starting to ease up, and it could lead to a surge in shipping.

“[The number of ships] at anchor has started to subside and to the extent congestion continues to ease, import growth should pick up this year amid a surge in consumer and business demand and low levels of retail and business inventories that will need to be replenished.”

That’s potentially inflationary news. A pickup in the economy, even beyond what is already forecast, could lead to higher prices.

Inflation could benefit some sectors, especially commodity producers. There’s a long history of commodity prices rising as inflation increases, and they’re often considered as a portfolio hedge to the rising price of goods.

That’s one reason I recently recommended a trade in Exxon Mobil Corporation (NYSE: XOM), the largest oil and gas company in the United States.

This Texas company explores for and produces crude oil and natural gas in the United States and internationally, handling both upstream (exploration, extraction, shipping) and downstream (refining, marketing, retail) operations.

As you’d imagine, XOM tends to rise and fall in lockstep with crude oil prices. If inflation pushes commodities higher, XOM could get a boost as well.

As XOM’s business prospects improve, this is an ideal time to consider adding shares to your portfolio. What’s more, income-minded investors will be glad to know that the stock offers high income — with a dividend yield of more than 6%. 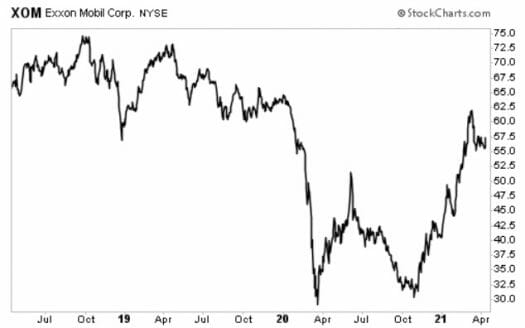 As you can see in the chart above, XOM has recovered significantly from its lows in 2020 — but there is still some ground to cover before reaching back to its previous highs.

If inflation does creep up, this should affect commodities (like oil) and in turn send XOM higher. In the meantime, the 6% yield is a good way to get paid to wait. But rather than simply wait, I’m sticking to my time-tested strategy that allows me and my readers to get paid with immediate income — while still collecting the dividend for as long as we hold.

Think of it as like an “insurance” policy — it protects us, while still giving us the chance to profit. And if everything works out, we’ll generate far more income than the average “buy-and-hold” investor.