If You’re Going To Buy Cryptocurrency, We Like This One More Than The Rest

It’s being hailed as a “watershed” moment for the cryptocurrency world. I’m talking, of course, about last week’s initial public offering for Coinbase (Nasdaq: COIN), the largest cryptocurrency exchange in the United States.

Why is it being watched closely by Wall Street as well as the retail investment community. According to MarketWatch:

The arrival on the public markets of Coinbase is a big moment in the world of cryptocurrencies. The company was created just over a decade ago with the genesis of bitcoin and today stands at what many in the industry have described as a tipping point.

There are few ways to secure direct ownership of crypto currencies, outside of buying them directly, a service that Coinbase provides for a fee, and which investors appear willing to pay for.

Coinbase, whose users primarily deal in bitcoin and ethereum, reported last week that its revenue soared 847% in the first quarter to $1.8 billion, and that it now has 56 million verified users.

In short, this could mark an important point in the “mainstreaming” of cryptocurrency. Or, alternatively, it could serve in hindsight as the high-water mark for a bubble.

Only time will tell, of course. But I thought this would be a good opportunity to dig a little deeper…

So What’s The Blockchain Anyway?

We’ve received a lot of questions and comments about the crypto universe in the past couple months. Subscribers want to know more about everything from bitcoin to the blockchain to NFTs, “yield farming” and more.

So expect to see us chime in more on this in the future. But first understand that our readers have differing levels of understanding (and interest) in cryptocurrencies. So we’re going to give commentary about this space on a piecemeal basis.

So with that said, let’s go over some things. Many of you may have been asking about which cryptocurrencies we like… We’ll get to that in just a second. First, some of you may be a little new to the game and may want to know about some of the basics.

While we won’t cover everything today, I do want to address one important fundamental concept that’s really key to understanding all of this: the blockchain.

According to many experts, whether cryptocurrencies shoot “to the moon” or not, blockchain is the real disrupter here. I agree with that sentiment, and so does my colleague Jimmy Butts. His description of the blockchain to Top Stock Advisor readers was spot on, so I won’t reinvent the wheel:

Blockchain will likely disrupt a number of industries, including the payments industry.

As a result, the computer with the bad ledger then will update its ledger to match those of the other computers in the blockchain network – thereby preventing the fraud.

Another massive benefit of blockchain is that this ledger updates in real-time.

So beyond all the rampant speculation, aside from all the headlines, this is what the fuss is all about. This is where the disruption happens. And it’s for this reason that Jimmy and I both like one cryptocurrency more than the rest…

The One Cryptocurrency We Like More Than The Rest

Now, keep in mind that buying cryptocurrencies at this point is still pretty speculative. They’re highly volatile, and you should not risk more than you can afford to lose if you’re going to get into this space. If you’re interested, though, there are a ton of choices out there. Many of them, frankly, have dubious potential at best. Others, however, do hold some promise.

Of the thousands of digital currencies out there, Bitcoin is the “blue chip” of the bunch — everyone knows about it. It accounts for about 55% of the total market cap in this sphere. But at this point, we think another well-known digital currency is a better bet for new investors.

Jimmy and I both agree on this… if there’s one cryptocurrency out there we had to choose right now… it would be this one.

So what exactly is Ethereum? Well, for now I’ll give you the short answer. (For the long answer, I’ll refer you to this excellent primer from Coindesk.)

Ethereum is a platform operating on the blockchain that seeks to break down the walls between users. In short, it helps facilitate exchanges of value between users while cutting out the middle man. If you’ve heard of buzzwords like defi (decentralized finance) or dapps (decentralized apps), then you know that Ethereum is the platform that promises to enable these concepts to become a reality.

Naturally, Ethereum has been on a tear just like everything else crypto-related over the past year. Just take a look at the chart below. 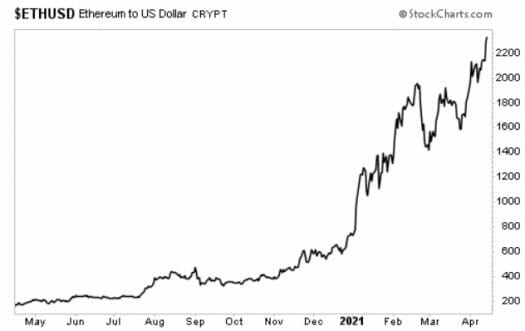 This is a mind-boggling chart. The question is, can it continue? Well, the potential is there. The use cases are numerous (think payments, mortgages, data privacy, etc.) – and we may get into those in more detail at a later date.

To purchase Ethereum, you can simply go to a cryptocurrency exchange website or app, like Coinbase. If just some of the things Ethereum promises to revolutionize come to pass, then it could very well make you a lot of money. But let’s be honest – we just don’t know for sure. And that’s what makes all this fun, but also potentially dangerous for an undisciplined investor. For that reason, as Jimmy recently pointed out to his readers, you should treat this as a speculation – not an investment.

Still, there’s a reason Ethereum made it onto Jimmy’s list of “shocking” investment predictions for 2021…

For those that haven’t seen the report, Jimmy predicted that the big cryptocurrency winner of 2021 would be Ethereum – eventually passing bitcoin in popularity. We’re barely into the second quarter of the year, and that one’s already looking like another big win.