Is The Tech Trade Dead After All This Time?

Last week when I fired up my Maximum Profit system, I patiently waited as it filtered through thousands of stocks and spit out several potential “buys” on the other end.

In fact, they were none to be found. The only single tech name on my screen only made it through because it is being acquired — pushing shares higher — but this was not really an investable trade.

It’s been a long time since I’ve seen this…

It seems the momentum for tech stocks is dead… at least for the time being. Investors have moved on.

This shouldn’t come as a major surprise considering the kind of year tech stocks posted last year, and over the last few years in general. The tech-heavy Nasdaq finished last year up more than 44%, despite the massive Covid-19-induced plunge the index suffered in March. 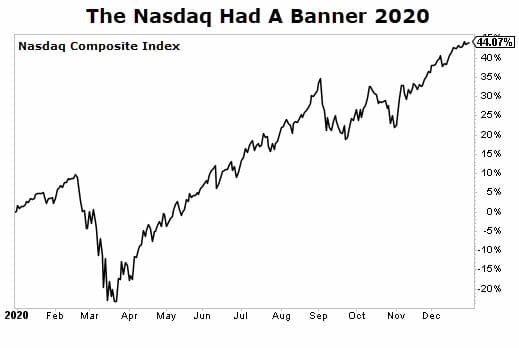 Over at Maximum Profit, we saw many of our tech holdings run rampant last year…

We had a dozen of our holdings jump more than 50%… 75%… 100% in a matter of months — sometimes weeks — last year. But as I repeatedly said… “don’t get used to those sorts of returns. It’s more of an anomaly than a standard.”

When The Trend Is No Longer Your Friend

The fallout in tech stocks isn’t anything new. We’ve seen it play out over and over again in a number of industries. For example, back in 2013 and 2014, we were heavily allocated towards oil-related companies as the shale boom was underway. We made good money trading many of those names.

But eventually, the momentum turned, we booked profits, cut losses short, and moved onto the next big trend.

Just look at the oil and gas industry. As I mentioned we had a good run in this sector in 2013 and into 2014. But if you didn’t book your profits or cut your losses and suddenly decided that you’re a “buy-and-hold” investor… well it’s been an extremely dismal seven years. Especially considering that during that time we witnessed a massive bull market nearly everywhere else. 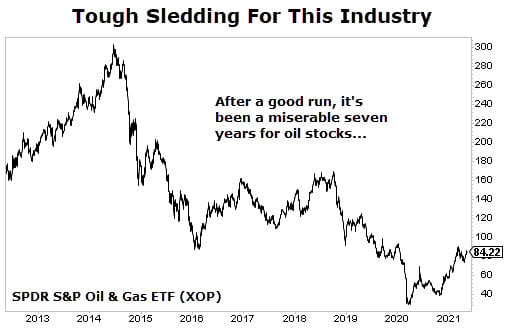 The point is that while we’ve been heavily allocated towards tech stocks… And while that was extremely rewarding over last year… this year, the trend has been exhausting.

Tech stocks have yo-yoed, and after last week’s relatively vicious selloff, the Nasdaq 100 is essentially flat on the year. 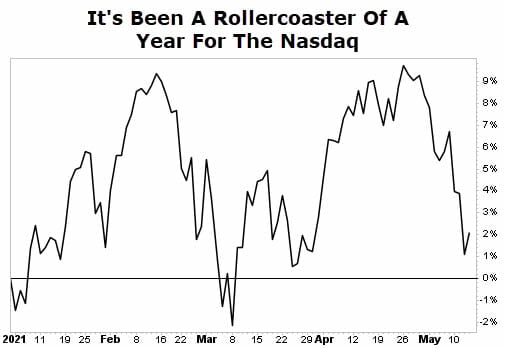 Outside of profits being pulled after a tremendous year, valuations have also been stretched.

This could mean that these names have even further to fall. Either way, it could be a dangerous time for investors in this sector.

One thing I remember vividly about the last two major trends we profited from – oil, and then a short-lived boom in biotech stocks — is that the emotional tug to hold onto these stocks is extremely strong.

It makes sense, too. After all, we just witnessed quick double- triple-digit returns from some of the names in the industry, so it’s tempting to believe they’ll return to those previous highs. (This is known as anchoring.)

But more times than not, it takes years to recover, and you’ll be sitting on dead money until then.

I am by no means suggesting that the technology sector will follow a similar fate in terms of how long the industry could be depressed. The tech fallout could certainly fall much further than one might think, or this might be a simple correction.

I have a hard time believing it could last as long as the oil and gas industry suffered. But that’s not the point… the point is that even if it takes 3… 6… 12… or 18 months or longer for tech stocks to regain their momentum, it’s lost time that we could have spent putting my money to work in stocks and industries that are surging to new highs.