One Of My Favorite High-Yielders Just Got A Major Boost…

If you live anywhere south of the Mason Dixon line, you probably remember the polar invasion of subzero temps and record snowfall that hit a few months ago, turning the landscape into arctic tundra.

Here in Northern Louisiana, temperatures bottomed out at 1 below zero on February 17 and stayed below freezing for more than 120 straight hours. About half a foot of snow fell that day, and a reinforcing cold front two days later coated everything in several more inches of sleet and freezing rain, paralyzing travel for an entire week.

We get the occasional winter outbreak down here but it usually thaws out in a day or two. A prolonged event like this only happens once in a generation. As I watched my youngest son (an avid hockey player), skating on a frozen pond, I remembered doing the same thing myself as a kid the last time this happened back in 1983.

Why bring this up now? Because the financial impact of the record deep freeze is just now being reported by affected businesses. For most, it hurt the bottom line. But not company…

The midstream energy company I’m referring to – which has been a longtime favorite of my High-Yield Investing subscribers – saw a massive boost in demand for its services.

How massive? How about a $1 billion cash windfall.

A Storm For The Ages

As you might imagine, the sub-zero temperatures had homeowners across the country cranking up their thermostats – pushing power utilities to the brink. Many asked their customers to take any steps possible to conserve electricity. In Texas (where all 254 counties were placed under winter weather advisories), it wasn’t enough.

The overloaded power grid failed at the worst possible time, causing widespread outages to nearly 5 million accounts. Accustomed to seeing power usage spike during the brutally hot summer, dozens of generating facilities owned by companies such as Exelon (NYSE: EXC) and NRG Energy (NYSE: NRG) were unprepared and forced to shut down.

As temperatures plummeted, wind turbine blades literally froze and became inoperable. But the bigger problem was a severe shortage of natural gas, which fuels about half of the state’s power grid. Electricity providers had to resort to rolling blackouts (what they call “load shedding”), some of which ironically shut down natural gas storage and production facilities, making the problem even worse.

Our storage assets performed exceptionally well, allowing us to deliver gas into the market throughout the storm. These volumes were directed primarily to serve gas utilities and power plants, including some customers who traditionally find their gas elsewhere.

As one of the nation’s largest owners of pipelines, storage terminals, and other energy infrastructure, Kinder Morgan was uniquely prepared for this catastrophe. The company had invested $5 billion over the prior 36 months to enhance and expand its Texas operations, including upgraded weatherization and backup power generation.

And now, shareholders are reaping the rewards.

Kinder Morgan reported a monstrous distributable cash flow of $2.33 billion for the first quarter, versus $1.26 billion a year ago – a hefty increase of more than $1 billion.

Wall Street had been banking on a net profit of $550 million, or $0.23 per share. To say that KMI beat expectations would be an understatement. Net income nearly tripled targets, soaring to $1.4 billion, or $0.60 per share.

Management was quick to point out that most of the gain was storm-related and thus non-recurring. Still, a win is a win. KMI only needed $615 million in DCF to cover its quarterly dividend, out-earning its distribution by a whopping surplus of $1.71 billion. And it did so by helping customers from Austin to Amarillo stay warm during the record cold.

As you can imagine, shares of KMI were beaten down along with the rest of the energy space when the double-whammy of Covid and plummeting energy prices struck last year. Pre-Covid this was a $21 stock, and shares sank below $12 by October of last year. 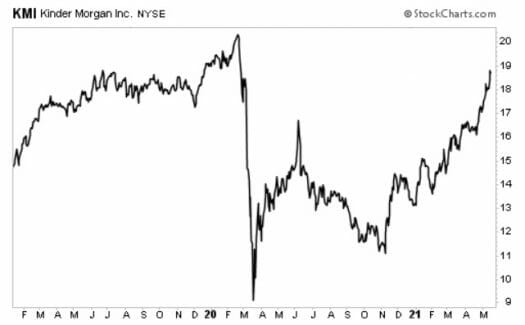 The stock has mounted an impressive comeback. And while the bulk of the recovery is already on the books, I still think KMI is worth a look at these levels. The company is upping its quarterly payout to $0.27 per share, which lifts the yield to nearly 6%.

Editor’s Note: If you’re looking for a way to earn higher yields in this low-rate market, then you should check out Nathan’s premium advisory, High-Yield Investing. Why settle for 2% yields offered by the average S&P 500 stock when you could be earning 7%, 8%, even 10% or more from the safe, reliable picks Nathan and his team find every month? To learn more, go here.