This Old Favorite Is About To Pay A Big Special Dividend

As many of you know, around the end of each month I write about companies that are poised to hike their dividends over the next four to six weeks (give or take).

I do this first within the pages of my High-Yield Investing premium service. Over the years, we’ve found that many of our subscribers are always on the hunt for ways to further boost their income — and so we try to point them in the right direction as they look for portfolio candidates beyond the official selections we make for the portfolio.

But aside from writing about dividend raisers, I also like to highlight noteworthy special distributions on the horizon. These are more rare than dividend raises, of course, but equally valuable if you’re an income-lover.

That’s exactly what I did in my most recent issue — in fact, I devoted our entire section reserved for this conversation to a company that’s paying a massive special dividend.

And now that I’ve shared this with my premium readers, as usual, I’d like to share it with you today.

Some readers might remember this name: CVR Energy (NYSE: CVI).

This is a former High-Yield Investing portfolio holding. We parted ways in August 2019 with a nice one-year gain of 33%. The timing was good, as the shares went into a tailspin shortly after. You can probably guess why… aside from company-specific issues, the Covid-19 outbreak sent energy prices into a tailspin, dragging CVR down with it.

But CVR has been bouncing back in recent months – and just shot up as much as 14% on May 12 following the announcement of a major restructuring. 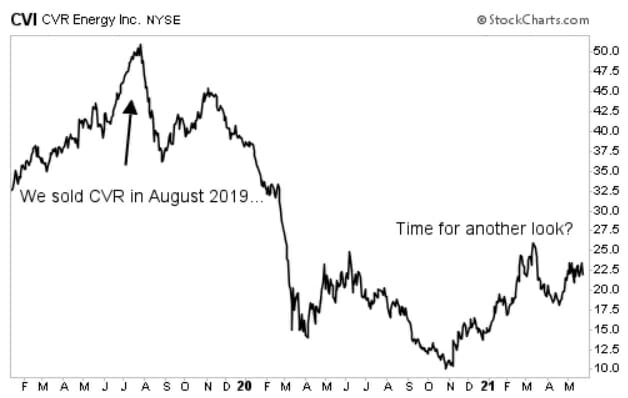 If you recall, CVR is primarily engaged in two pursuits: oil refining and fertilizer manufacturing. The company operates a pair of refineries that crank out about 185,000 barrels of gasoline and other refined products per day. On the other side, it produced 188,000 tons of ammonia last quarter, some of which was processed into other crop nutrients such as urea ammonia nitrate (UAN).

After weighing its options, management has decided to transition away from traditional refining, citing an industry “pivot” in favor of renewable fuels. That overhaul includes the re-purposing of its Wynnewood, Oklahoma and Coffeyville, Kansas facilities, allowing them to swap out crude oil feedstocks for corn oil and start making biodiesel.

Given volatile refining “crack spread” margins and onerous environmental regulations, many shareholders embraced the move. The Wynnewood facility alone will have the capacity to produce 100 million gallons of renewable diesel fuel per year.

But here’s what really excited the market. The company had been stockpiling cash on its balance sheet to acquire another refinery. Those plans have now been thrown out the window. And with that idle cash earning next to nothing in this low-yield environment, the board has voted in favor of returning it to stockholders.

A distribution of $492 million has been improved, or about $4.92 per share. That’s equivalent to a payout of more than 20% of the $2.35 billion market cap. Some of this distribution will come in the form of stock in Delek Holdings (NYSE: DK). CVR owns about 10 million shares of the downstream energy company and is sitting on a $116 million investment profit.

These shares will be handed out on a pro-rata basis to CVI stockholders. The remainder of the $492 million will be disbursed in cash. This special dividend will be paid on July 10 to investors who purchase before the ex-dividend of July 11.

Ordinarily, you would need to be a shareholder of record several weeks before the distribution date to be entitled to the payout. But distributions this large (20% or more) entail different rules involving “due-bills”. Put simply, due-bills are instruments that obligate the seller to deliver the dividend to the buyer. Most of this is handled between the respective brokers.

As always, you should be aware of tax implications before investing. And be aware that the shares will adjust downward on the ex-dividend date to reflect the distribution.

Frankly, CVR Energy is a mess right now. The company has been plagued by demand destruction arising from the pandemic as well as costs to comply with renewable fuel standards. The fertilizer side of the business hasn’t been much better, with ammonia sales prices diving 28% last year to $284 per ton.

Revenues plummeted last year, and the bottom line swung to a hefty loss. The quarterly dividend was also scrapped.

But it’s the future that matters, not the past. Strengthening crop values and farm profits have helped lift fertilizer prices. Gasoline usage is quickly bouncing back. And the switch to biodiesel (while incurring sizeable expenditures upfront) could lead to healthier and more stable cash flows down the line.

Small refiners like CVR were getting killed by high prices for renewable identification numbers (or RINs). The federal government has had a longstanding mandate forcing refiners to blend a certain amount of ethanol (or other biofuels) into their gasoline. Those without the necessary equipment must purchase RINs from larger rivals with ample blending capacity. Purchasing these RINs has taken a huge bite out of CVR’s bottom line.

In the future, it may be in a position to sell them, rather than buy. I do question why some of the cash wasn’t used to pay down the firm’s sizeable debt load (possibly the influence of Carl Icahn, who pulls some of the strings here). Nevertheless, this special dividend, improved industry fundamentals, and a big restructuring all make CVR an interesting candidate for patient investors.

P.S. Keep in mind, this isn’t an official recommendation, so you’re on your own if you want to look into this one further. To get my top picks and research, you’ll need to become a member of High-Yield Investing.

In a world with record-low interest rates, it’s never been more important for income investors to know about the reliable high-yielders that we recommend each month… I’m talking about the kind that pay yields of 6%, 7%, 9%, and more — yet, most investors don’t even know exist.

Go here now to check out my latest report.